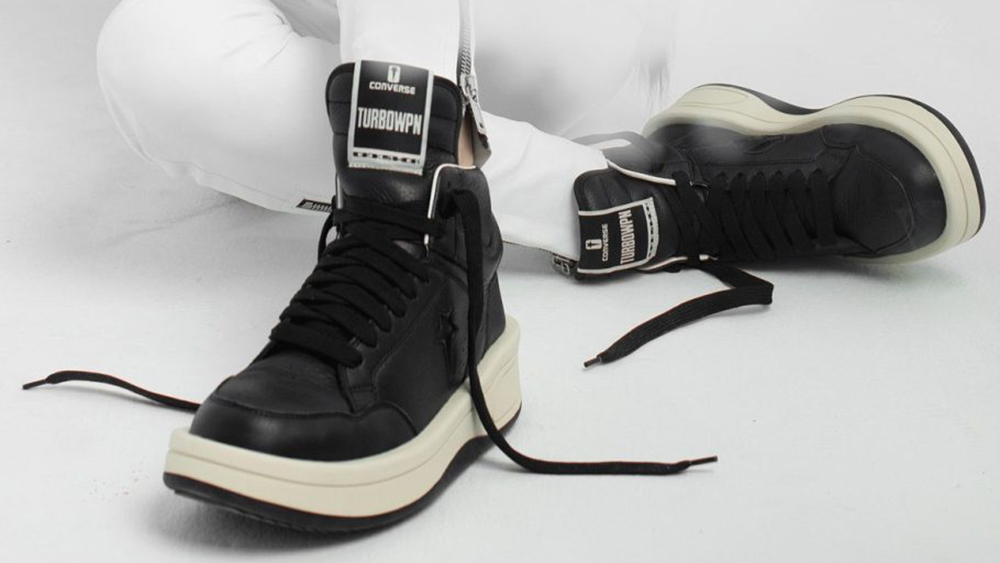 Rick Owens and Converse have another collaboration arriving soon, and similar to their recent sneaker project, the fashion designer has reimagined another classic silhouette from the sportswear brand.

Hot on the heels of their DRKSHDW TURBODRK Chuck 70 collab that dropped last month, the two entities have come together in August to reenvision the Converse Weapon that debuted in 1986.

Dubbed the Converse DRKSHDW TURBOWPN, Owens exaggerates the look of the shoe by adding an elongated tongue like their recent Chuck 70 style while keeping the rest of the leather upper similar to its basketball counterpart. The designer also applies his signature touch to the model by applying his DRKSHDW iconography throughout the shoe. Rounding out the look is a plush CX foam drop-in footbed along with a platform-like outsole that’s doubled the height of the standard Converse Weapon. According to Converse, Owen’s DRKSHDW TURBOWPN collab will debut in a black-based colorway as a nod to the Weapon’s original makeup while honoring the designer’s approach to contemporary luxury.

“When I discovered how powerful just oversizing something a little bit was, which I’ve done with a lot of my clothes, that became one of my tools,” Owens said in a statement.

The Converse x DRKSHDW TURBOWPN collab will be released on Aug. 31 at Converse.com, RickOwens.eu, Rick Owens shops and select retailers. At the time of publication, the retail price for the shoe has not been revealed.

In related Converse news, the sportswear brand also teamed up with John Elliott this month to deliver two new iterations of the classic Skidgrip skate shoe.