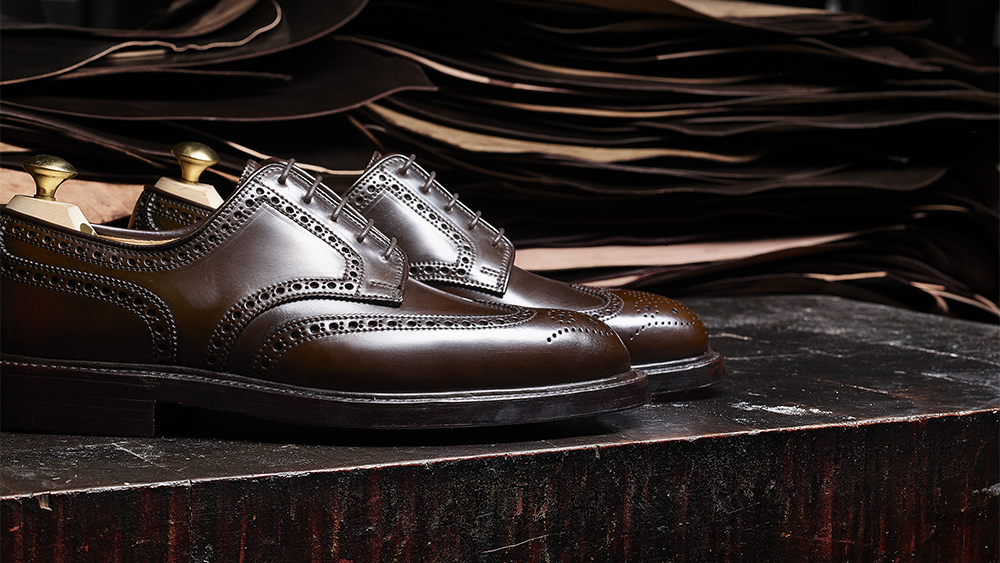 Barring such exotics as ostrich or crocodile, men typically think of proper dress shoes as coming in two flavors: calfskin or suede. So, what to make of shell cordovan, a leather that falls into neither camp but is easily identified by its lustrous appearance and premium price tag?

“Cordovan is a precious commodity,” says Steven Taffel, a man who ought to know. As owner of the West Village shoe store Leffot, Taffel spends his days surrounded by cordovan watch straps, wallets and, of course, shoes. To mark its 15th anniversary, the shop has offered pre-orders of limited-edition cordovan styles from makers like Rancourt and Alden. Pre-orders for the next installment in the series, a cordovan sneaker made by Hiro Yanagimachi, will be accepted during a trunk show with the maker the first weekend of November.

“It’s beautiful, first of all,” he says of the material’s distinct luster. “It’s very low maintenance, but it’s also a leather that molds to your feet. It’s very comfortable and very durable.”

However, there’s good reason we aren’t all walking in shell cordovan 24/7. As Taffel notes, it is indeed precious, starting with its source—the underside of a horse’s rump. The term “shell” refers to the dense, fibrous, oval-sized membranes found beneath a horse’s hindquarters, the size of which will vary with each animal. Not only is shell in shorter supply than calf leather, but it also requires extra pains to tan and manufacture. Its most notable producer is Chicago’s Horween Leather Company, which naturally tans its shells by steeping them in vegetable liquors before shaving and polishing each by hand, a process that can take six months or more.

James Fox, who serves as head of marketing and e-commerce for Crockett & Jones, can speak to the additional challenges the Northampton shoemaker faces when manufacturing its shell cordovan styles. “In our factory, there are many processes that involve heat and pressure,” Fox tells Robb Report. “Materials with vegetable tannage do not like heat, pressure of water.” In response, Crockett & Jones assigns only its most skilled staff to the process, which utilizes older machines that are easier on the material but require constant upkeep. “This all adds time and cost to the production process, with full-time engineers beavering away making parts that are no longer available,” Fox says.

The results, however, are worth the pain. “Shell cordovan is unbelievably hard wearing, featuring the tightest fiber structure of all materials we use,” Fox continues. “In fact, it is so durable that our clickers use it as a ‘strop’ to give their blades a final polish after they have been filed and shaped.”

But for proving so fussy in the factory, shell cordovan is famously low maintenance in its finished form. Because its dense fiber structure holds onto the vegetable fats used in the tanning process, shell cordovan’s signature luster can be restored through simple (if vigorous) brushing with a stiff horsehair brush. For occasional cleaning and conditioning, Taffel prescribes a touch of Saphir Rénovateur.

Aside from its natural gloss and hard-wearing nature, shell cordovan may be best known for its signature hue: a deep, dark aubergine known as “color 8.” While not the only game in town—you may spot black, “cigar” or “whisky” now and then—the lion’s share is color 8, which with time and sun exposure fades to something resembling oxblood or burgundy.

Shell requires less polishing thanks to its natural qualities, but Taffel says wearers who wish to preserve its color can apply Saphir’s cordovan crème from time to time. For more intensive care, such as removing small scratches or smoothing out the creases it is prone to, Taffel recommends a most unusual tool: deer bone. It might sound witchy, but the tiny animal bones contain oils that will leave shell cordovan looking pristine when applied to its surface.

Taffel suggests Alden as a cordovan starter shoe and though he identifies the maker’s Norwegian split toe, longwing and chukka as being among a “core group” of shell cordovan classics, he points to Alden’s plain toe blucher as an ideal introduction to the material.

“It’s one single piece of cordovan and you can really appreciate the beauty of the skin itself,” he says. And who knows—you may even feel inspired to pick up a deer bone from time to time.