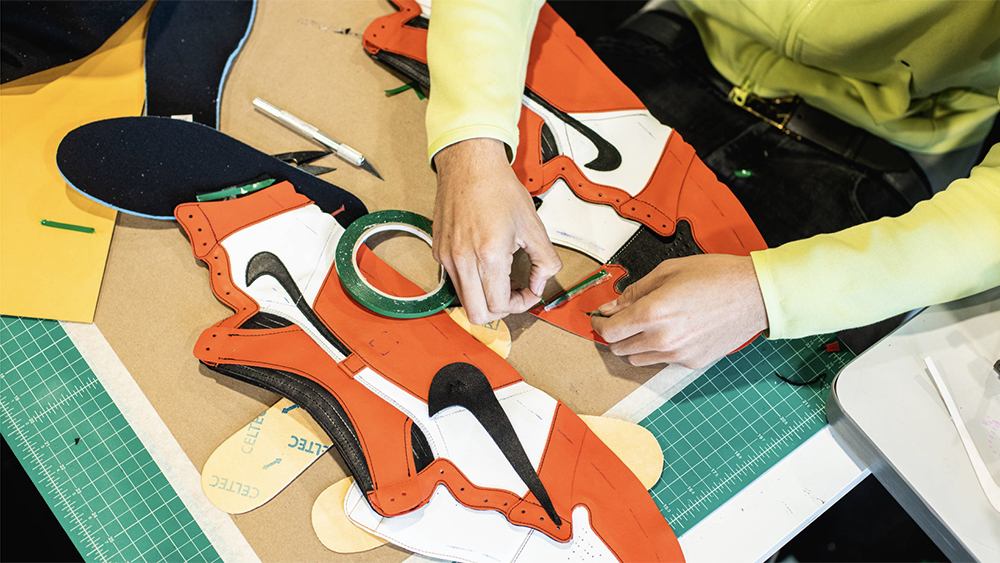 Visiting the sneaker-making classes at The Shoe Surgeon headquarters in downtown Los Angeles, you instantly get the sense that students here leave with much more than a pair of custom sneakers or even the knowledge of how to make them. Although the building is entirely nondescript outside—like much of Los Angeles, you’d have to know something was there—inside, it’s an inspiring hive, buzzing with the sound of industry and invention.

Michaels, this is not. There are no wobbly folding tables or empty coffee cans full of shared scissors. In fact, the 16,000-square foot warehouse in which the custom sneaker-making classes are held has a foosball table, ping pong set, video games, comfy work booths, surround sound audio—even a private bar. A wall in the back of the classroom, which also happens to double as a basketball court when class isn’t in session, is painted with the mantra, “Never Stop Creating.” The vibe here is one of an adult summer camp held in a really cool club. 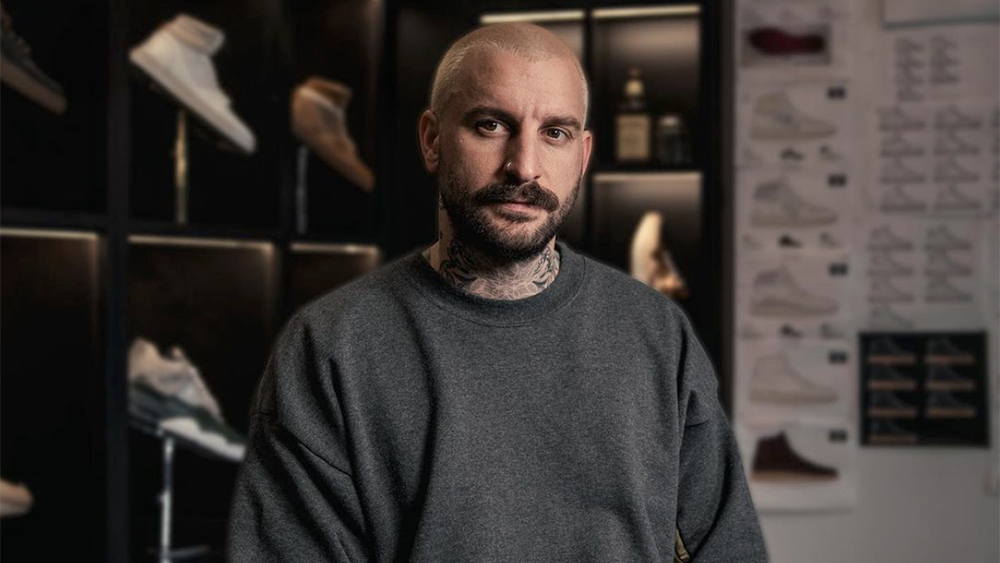 That the school is so expansive is even more remarkable given that it was started just five years ago, although this particular space has only been open since March of 2020. Founded by Dominic “The Shoe Surgeon” Ciambrone, the Surgeon Creators’ Academy offers online and in-person classes in the deconstruction and reconstruction of classics like Air Jordans, Stan Smiths, Yeezys and other popular sneakers. A typical session of four days of eight-hour classes runs about $5,000 for Air Jordan 1s ($6,000 if you want to have access to “exotic” skins like shark, croc, python and the like.)

The experience, like the sneakers, is highly customized. Students are given a shoemaking kit, apron and leather tag with their names embossed in gold. With a full range of materials, colors, threads, laces, and even embossed tongue labels from which to choose, students learn to operate professional sewing machines, cut materials and, most importantly, how to put the shoe together. 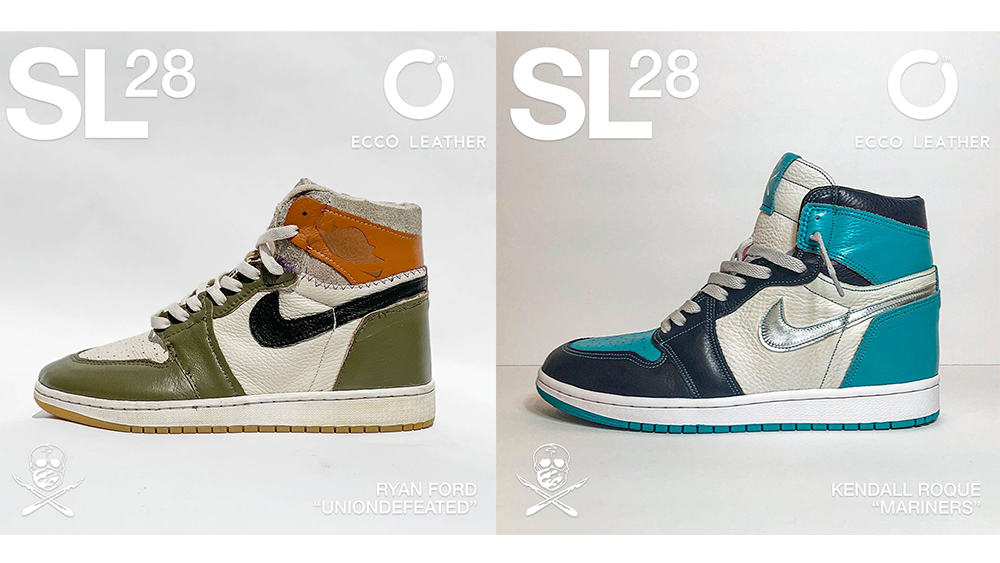 As an example of what a personal experience this is, consider that students are also invited to name their shoes. (The results sound like a roll call of incredibly hip boat names: “Yellow Poison,” “Beauty in the Struggles” and “Suede Sunset.”) Although they are guided through the class by teachers, all of whom are former students, the work is theirs entirely. The only step done by a professional is lasting (the process of pulling the sneakers over a shoe mold, otherwise known as a last.) Shoe Surgeon project manager Tatiana Diaz says the final step, pulling the last out of the sneaker “is like a graduation ceremony.”

Ray Houston, a student from San Antonio, Texas agrees. Explaining that his mother not only made some of his clothing but taught him to sew, Houston says he came here because he always wondered what it would be like to make a shoe, rather than a garment. The class did not disappoint. “It was definitely amazing,” he raves. “Just being in the space makes you feel like you can create anything. It’s all positive vibes, from staff to students.” 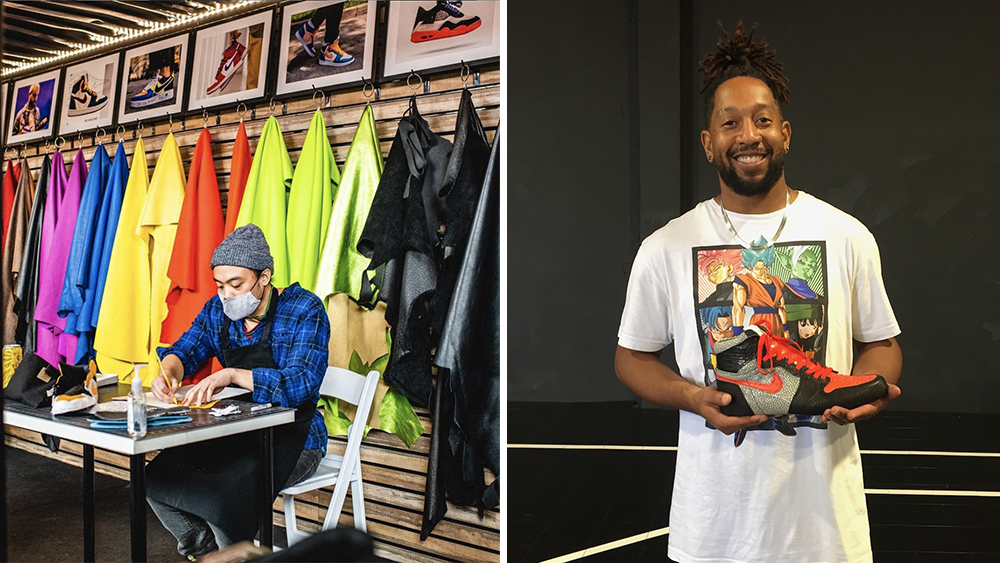 A student at work, and another with his creation.  The Shoe Surgeon, Courtney Lichterman

Ciambrone reports students have ranged from 13-year-olds to 70-year-olds to people who have sold their cars to be able to afford the experience. Although classes, which average 16-20 people, skew male, women aren’t uncommon. Many of the students take the class for fun, but for many, it’s a business investment. In addition to the instruction, there is a networking event with each class.

Behind the basketball court and sewing machine container (much of the vast space is sectioned off into containers), is the bustling retail workshop where Ciambrone and his team make custom sneakers for private clients. The team has worked with Gucci, Nike, eBay, Footlocker and Jack Daniels. In fact, it was the whiskey company that built out the Shoe Surgeon bar.

Originally from the Bay Area, Ciambrone says his creative impulse emerged early in life. “I needed to be making stuff with my hands. I didn’t like traditional schooling, so I knew that if I needed it, other kids or humans, in general, would need that as well,” he recalls. “I think what we’re missing in this world is a creative outlet—actually creating something in your head and then making it physically.” 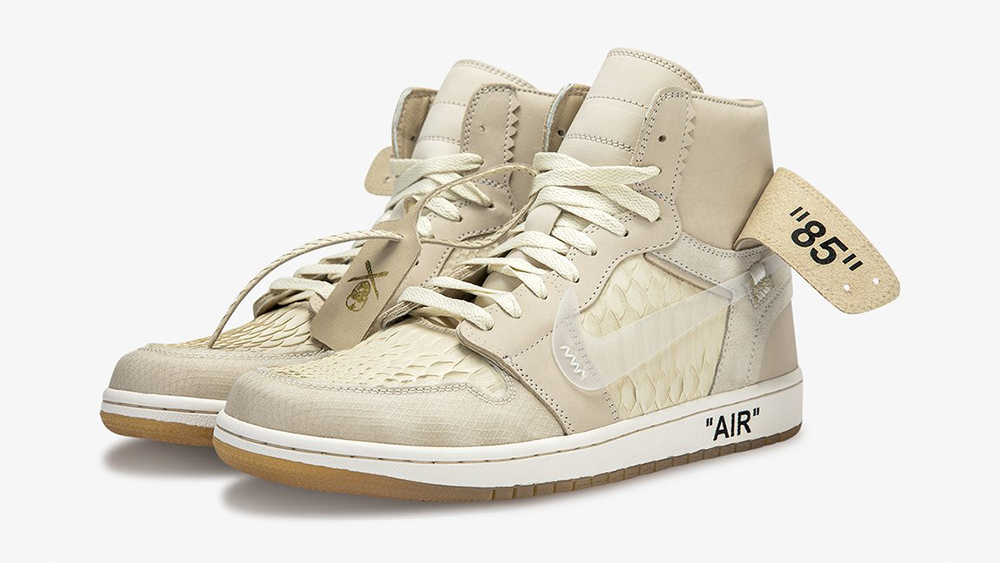 Ciambrone’s custom Air Jordan 1’s ($6,000) are one of the many rare pairs he sells.  The Shoe Surgeon

Ciambrone says it was a Western bootmaker from his hometown who inspired him to pursue sneaker making as a career when he was in his 20s. “Just to see how passionate he was about making these custom boots—that’s what I wanted to translate into sneakers.” Although another mentor taught him the art of shoe repair and he eventually took a class in traditional shoemaking, his sneaker expertise is self-taught.

“I think workshop learning is the future just because I would never be able to sign up for four years of anything. It’s just not how I am,” Ciambrone says, adding that he’d like to see the school grow (he’s already taught on the East Coast and, if all goes well, lessons will be held in New York this fall) and plans to branch out into clothing and even furniture designs. In the meantime, the L.A. space continues to hum with the sound of sewing machines, hammers and modern-day sneaker-cobblers who never stop creating.