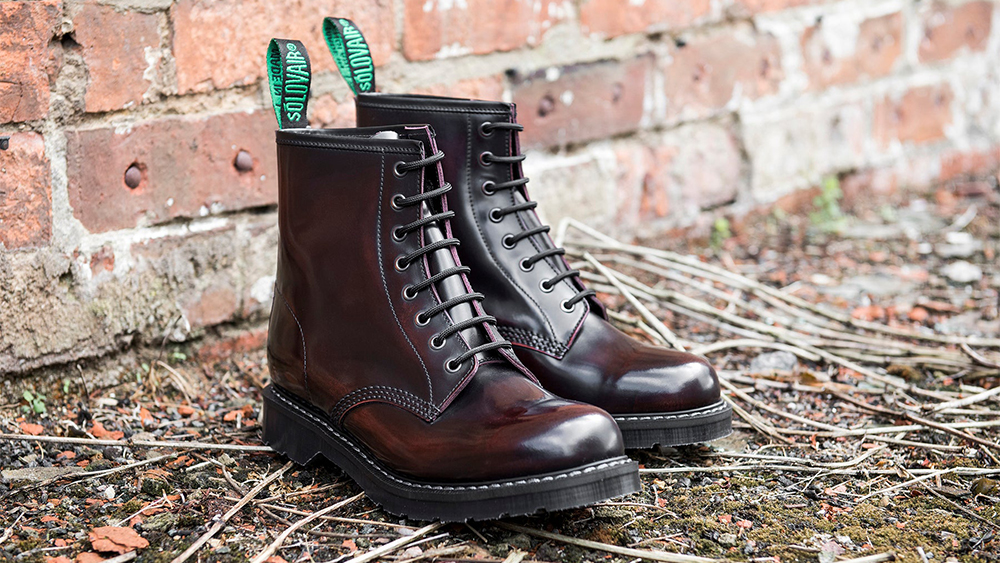 Within a ten-mile radius of England’s East Midlands region, you’ll find a disproportionately large percentage of shoemakers. Among them are all the big British names you know well: Crockett & Jones, Tricker’s, Edward Green, Church’s, Grenson and many more. But among the big brands that have made use of the area’s abundant cattle and fresh water supply for hundreds of years, there’s one that stands out: Solovair. It’s quietly produced its signature hard-wearing designs since 1881, mirroring the quality of more formal-leaning shoemakers while producing rugged work boots engineered to take a beating.

Walking through the nondescript doors of its Victorian red brick factory, where the company has been based since 1899, feels like stepping back a century. Time has stood still here. Sun streams in through the high ceiling’s skylights, illuminating decades-old machinery and rows of shoes at varying stages of finish. Every part of the shoe is assembled in this building, by hand, the old-fashioned way.

On the floor at Solovair’s Northampton factory.  Solovair

It starts with each roll of leather, equal to one whole cow, being meticulously cut into the correct shapes for the shoe’s upper. This satisfying process resembles a game of leather Jenga, tasking the worker with minimizing waste as efficiently as possible. The pattern pieces are then wheeled to the sewing room, where they are carefully stitched together on Puritan machines that are over 120 years old. One is particularly intimidating and stitches three needles at the same time, sounding more like an M60 machine gun than a typical sewing apparatus. On my visit, I resisted the instinctive urge to take cover and watched a shoe’s upper being shaped on a last and then fused onto a bouncy rubber sole by a machine that heats to 1,290 degrees Fahrenheit, operated by a man with no gloves on.

If you thought Solovair’s hardy boots look like Dr. Martens, you’d be right. In fact, Solovair (or rather its parent company, NPS shoes) made the very first pair of Dr. Martens in the 1950s and continued to do so, under license, up until the ‘80s. Dr. Martens eventually decided to move its production overseas, but Solovair stayed put, continuing to manufacture the styles it helped invent. It’s best known for its derby work boots, with their rounded toes, high, 8-eyelet ankles and extremely grippy rubber soles. When fused to the uppers, those soles trap air in-between for a bouncy feel, which is what gave the brand its name: sole-of-air.

While the derby style accounts for 99 percent of Solovair’s sales today, it offers a range of boots. There’s the Astronaut, with its slightly sleeker stance, a quintessential chukka, a chunky-soled Chelsea boot, a speed-laced hiker, as well as derbies, monk-straps and loafers. All have the brand’s signature durable rubber sole, making them ideal for casual wear with denim and off-duty attire, but their practicality ensures they’re equally suitable for the workers in the factory in which they are made.

The Northampton footwear industry is not as thriving as it once was: In 1840, over 1800 shoemakers were estimated to produce in the area; today, there are just over 25. Cheaper, overseas manufacturing nearly wiped it out completely but Solovair stuck out the tough times and is now reaping the rewards. It currently makes around 100,000 pairs a year, which is a fraction of what its biggest rival produces (Dr. Martens made 14.1 million pairs in 2021). The fact that some of fashion’s buzziest streetwear brands, such as Noah and YMC, choose Solovair to make their shoes is a telling compliment, but that’s not what makes its boots stand apart. Solovair has made the same shoes in the same way for generations, and two world wars, a pandemic nor a recession has been able to stop that. The brand is as strong as the boots it creates, and that’s tough.