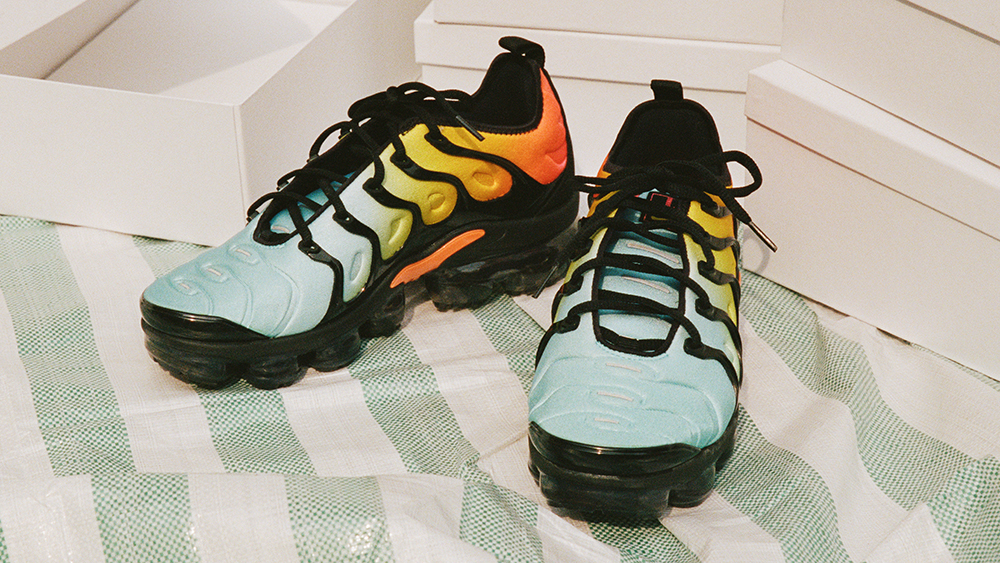 The first thing you have to know about Stadium Goods‘ buzzy new multi-platform partnership with Browns, the London department store, is that it has fully earned its name. The second thing you need to know is, naturally, that name: Sneaker Beast.

From May 15 through the end of the month, Stadium Goods (the downtown New York sneaker marketplace and purveyor of sought-after streetwear) will set up shop at Browns East, the Shoreditch arm of the high-end retailer. There, the two stores will offer customers a group of products that vary so wildly and come from so many sources that it can be kind of hard to wrap your head around.

There will be everything from sneakers that would make even the most discerning collector do a double take (like the Chanel x Pharrell Williams x adidas Originals NMD Hu Trails originally made for the now-closed Paris boutique Colette) to exclusive products from Hatton Labs, a London custom jewelry studio. There’s even a three-way collaboration between Browns, Stadium Goods and the London creative agency Superimpose that doesn’t feature a single shoe. But you will find everything from clothes to lighters to candles in it.

Stadium Goods’ trophy case is traveling all the way from New York for the Sneaker Beast project at Browns East in London.  Olimpia Castellini Baldissera

“One of the things that’s really exciting for us about being part of the Farfetch family is that our products commingle very well with high fashion and lifestyle goods,” said John McPheters, the co-founder and co-CEO of Stadium Goods, referencing his store’s recent acquisition by Farfetch (which also owns Browns). “This is very much our first foray into doing collaborative products, and we wanted to broaden the product mix beyond what we had done to date.”

Still, this is very much about the sneakers, as the project’s name will attest. Stadium Goods is even bringing an edition of its much-hyped Trophy Case to Browns East, which will feature shoes from the fastest-selling sneaker drops of all time. (Virgil Abloh’s work with Nike is represented, as are Louis Vuitton’s collaborations with Supreme and Kanye West.)

For those who aren’t in London, fret not: Stadium Goods is as much a digital marketplace as it is a physical store, which means that while McPheters and the Browns team thought deeply about what would resonate with a London audience, they also know there are products in this offering that will appeal to people beyond Britain’s borders. That might be why McPheters seems relatively unfazed by Brexit.

“I’m forever the optimist,” he said. “I feel like even if it’s a little more difficult to trade in the UK and Europe, there’s still very much a lot of excitement out there… One of the areas where we’ve always excelled is international audience building and fulfillment—providing that service that you need to be able to transact globally.”

So no matter where you are, you can get in on the action of this project. A look at some of the coolest product on offer below.

World-renowned artist Daniel Arsham teamed up with Adidas for this minty green colorway of the Futurecraft 4D with a 3D-printed sole.

Before taking his talents to adidas, Kanye West teamed up with French fashion house Louis Vuitton in 2009 on this rose patchwork low-top sneaker.

Released only at Chanel’s pop-up at colette in Paris, this is Pharrell’s rarest collaboration with adidas yet.

Bags were a staple in the iconic collaboration between Supreme and Louis Vuitton, and this Keepal Bandouliere 45 sports Supreme’s classic red with its logo in white.

This mountain parka featuring a bandana print became an instant classic in the rich history of Supreme x The North Face collaborations.

The products made in celebration of the partnership include tees, hoodies, track pants, a tote bag and candles.