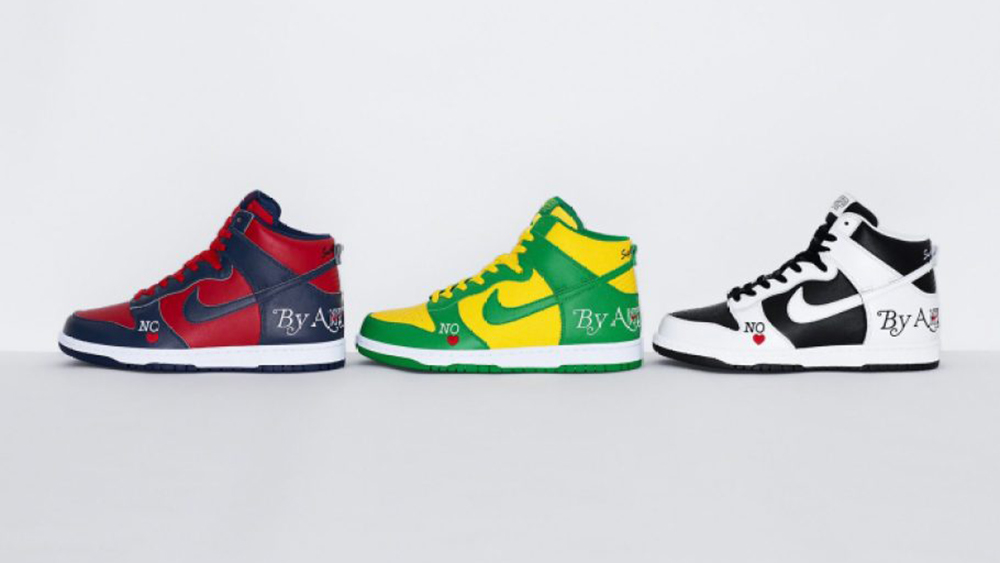 The legendary skatewear brand has announced on Instagram today that it has tapped the sportswear giant to deliver a trio of SB Dunk High styles arriving this week.

According to Supreme, it collaborated with Nike SB on a new version of the acclaimed Dunk High for this project. The shoe is equipped with a leather upper that’s embroidered with various texts throughout the shoe including “By Any Means” on the heel counter while “No” along with a heart logo appear at the forefoot. Adding to the design is co-branding on the tongue tag and footbed, a Zoom Air-cushioned midsole, and a rubber outsole. The sneakers are offered in three colorways including black and white, red and navy, and green and yellow iterations.

The Supreme x Nike SB Dunk High collab will be released this Thursday at Supremenewyork.com and at Supreme stores in New York, Los Angeles, London and Paris. The sneakers are also hitting shelves in Japan this Saturday. At the time of publication, retail pricing for the collab has not yet been announced by the collaborators.

In addition to the SB Dunk Highs, Supreme also previewed via the spring/summer ’22 lookbook that it has a new Nike Shox Ride 2 collab dropping soon. Check out more images, below.