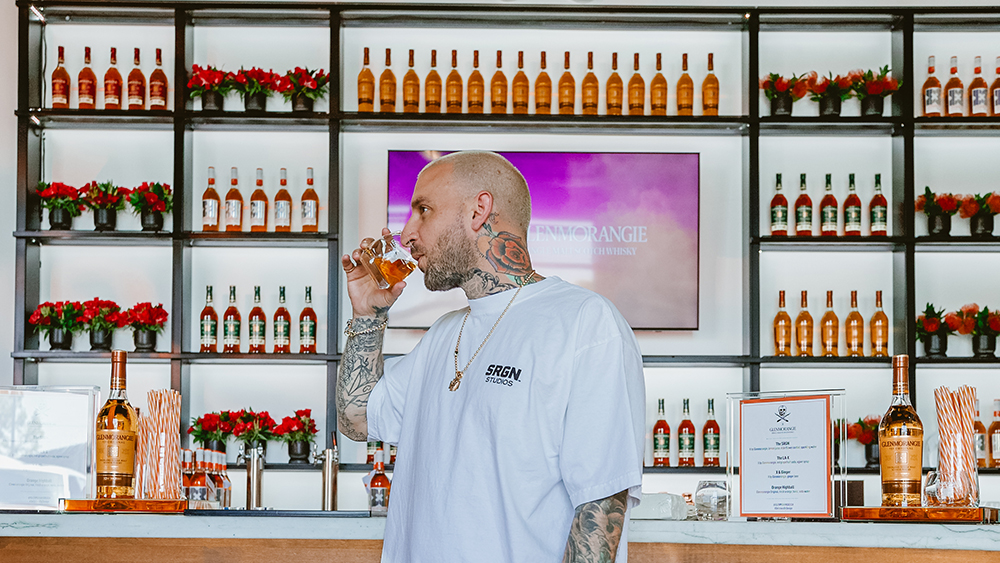 Dominic “The Shoe Surgeon” Ciambrone grew up working the kitchen of his parent’s Italian restaurant in Santa Rosa, California. Always drawing, sewing and screenprinting—he even fashioned his own prom tux—at the time Ciambrone didn’t realize washing dishes and sautéing garlic would translate into a career fashioning real gold leaf crocodile Nike sneakers (with 24 karat gold zippers and hardware) for Lebron James. Yet, they did.

“Looking back now, I learned so much from my father, and that’s where I think all of this came from—my dad being a chef using that food as his canvas, and the shoe just happened to be my canvas,” recalls Ciambrone from the VIP room of his newly opened flagship headquarters. “I come from hospitality, so it was important for me to take care of people, and I’ve always dreamed of doing it through creations and teaching people how to create, through sport and hospitality, through food and drinks. It’s cool to tie it all together here and make it one world in a sense.”

We’re deep in the bowels of the new Surgeon Studios, a shockingly expansive converted warehouse just south of the shimmering towers of downtown LA. To say the space is big is an understatement—it’s almost its own campus, complete with a private sneaker boutique, Glenmorangie bar, customization shop, mahogany-and-sneaker lined cigar lounge and even a wood-floored basketball court surrounded by VIP box seats seemingly plucked straight from Miami’s E11even nightclub. This summer, the latter will serve as a venue for a series of invite-only concerts.

The space’s sprawling basketball court at the opening.  The Shoe Surgeon

Outside this workshop—stocked with luxury fabrics and exotic skins, heel designs, insoles, color swatches, vintage sewing machines and basically everything you’d need to outfit an army with sneakers—a party is brewing to celebrate the opening of the flagship Surgeon Studios. In a couple of hours, multi-platinum stars G-Eazy and 2Chainz will be performing on those basketball courts while young celebs like Jordan L. Jones, Bryson Tiller and Night Tales casually walk about, picking at Tijuana-style tacos and sipping on Glenmorangie whisky cocktails. But for now, Ciambrone enjoys the relative quiet before the storm (with the exception of his young daughter sporadically running in, begging to ride the Ferris wheel waiting all-too-patiently outside.)

“My cousin let me wear her original 1985 Jordan 1s. I didn’t really know the power it had, and I wore those to school and it attracted other people. It helped create a voice for me without actually having to speak,” recalls Ciambrone of his origin story. What mesmerized the 15-year-old was how empowered he felt, how these sneakers opened doors and conversations.

Ciambrone at the new Surgeon Studios; the Glenmorangie bar at the opening event.  The Shoe Surgeon

The epiphany led to a hustle climbing the streetwear ladder, eventually selling custom Shoe Surgeon-branded Vans to LA uber-boutique H. Lorenzo and making sneakers for a season of Law & Order: SVU. But the breakthrough came in 2010 when mentor Javier Laval, owner and designer of Android Homme, commissioned Ciambrone to create bespoke sneakers for Will.i.am.’s VMA performance.

Now superstars like Justin Bieber, Drake and DJ Khaled don Shoe Surgeon leather on their feet. This past fall, Ciambrone caused a hypebeast frenzy with a pair of Darth Vader-black Adidas Yeezy Boost 700s inspired by the spiked Balenciaga jacket Kanye wore to his Donda listening party. And recently, renowned sneakerhead and NBA veteran PJ Tucker wanted to unseat Bron’s $100,000 crocodile kicks as the world’s most expensive, so Ciambrone crafted him a quarter-million-dollar pair festooned with 150 grams of 14k white gold and over 32-carats of diamonds from Jason of Beverly Hills.

PJ Tucker and his opulent Air Jordans.  The Shoe Surgeon

Next up Ciambrone will be traveling to Tain, Scotland this summer to visit his Surgeon Studios partners Glenmorangie to craft a highly exclusive single malt-inspired sneaker. That may sound unorthodox, but for a guy who’s made pizza, candy, junk food and even Ben and Jerry’s-inspired sneakers, Scotch whisky kicks aren’t that far-fetched.

“I’m excited because it comes down to working with your hands, and I think we lost that touch of everything made by hand. Now it’s coming back again and I just think it’s amazing when people are passionate about what they do, and they can show it through their work and get spotlighted.”

He recalls Glenmorangie being his introduction to the world of single malt scotch when a friend visited him nearly a decade ago, and soon after being mesmerized by the clean design and details poured into a bottle of Signet. “Visiting Scotland’s going to be amazing, and I know I’ll pull so much inspiration from the brand and Dr. Bill [Lumsden, Glenmorangie’s director of whisky creation],” he continues, rubbing his closely cropped head. “I love pulling inspiration from other crafts, so I’m already envisioning looking at the bottles, looking at the artwork and turning that into a shoe.”