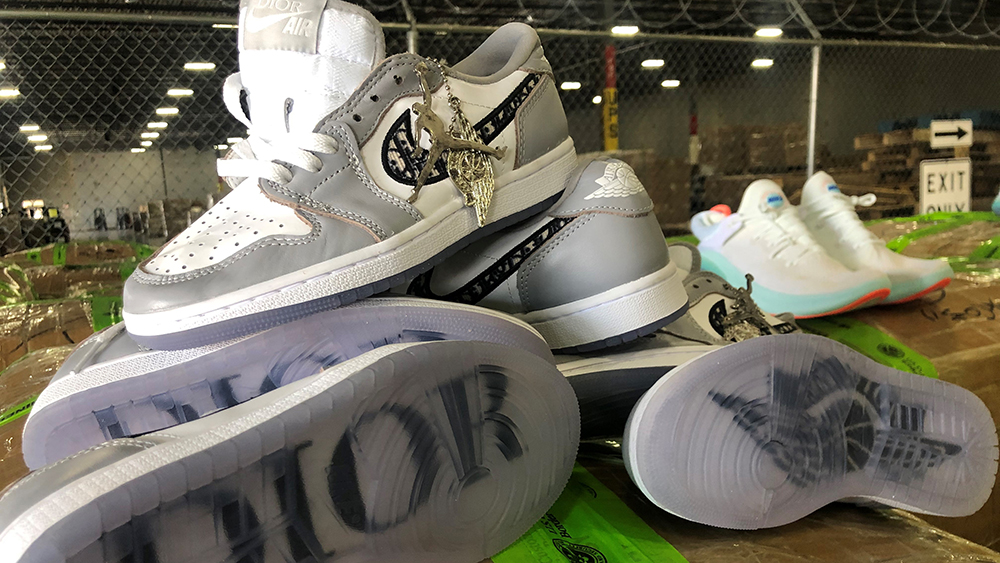 Somebody wasn’t so sneaky with these fake sneakers. US Customs and Border Protection (CBP) just successfully seized a sizeable shipment of counterfeit kicks worth more than $4.3 million.

The government agency reported on Monday that officers stationed at its Dallas/Fort Worth port intercepted the fake sneakers en route to Mexico. The shipment included 1,800 pairs of phony Dior x Air Jordan 1s, which are arguably the most sought-after sneakers of 2020, as well as several other knockoffs bearing Nike and Adidas logos.

According to the report from CBP, the shipment of 60 large boxes originated from Hong Kong and was declared as “Ball Golf” goods. After inspecting the items, officers concluded the footwear was not authentic due to the shoddy workmanship and incorrect packaging. CBP contacted the various brands for merchandise verification, and the shipment’s consignee was given a chance to submit proof of Trademark Licensing before the shipment was seized.

Responding to the incident, CBP Port Director Timothy Lemaux highlighted the harmful effects counterfeited goods can have on the American economy.

“Counterfeiters trafficking in phony merchandise are not concerned about the American consumer or the damage their fake goods can do to our economy,” Lemaux said. “CBP will continue to take every opportunity to intercept illegitimate goods and disrupt transnational criminal enterprises seeking to fund criminal activities with counterfeit or pirated merchandise.”

Unfortunately, it’s a problem that doesn’t appear to be going away anytime soon, especially as the hype around sneakers continues to soar. The aforementioned Jordans, which were originally priced at $2,200 for high-tops and $2,000 for low, sold out in record time and are now popping up on the resale market for between $10,000 and $15,000 apiece. Indeed, there’s money to be made and that makes pedaling a fake all the more enticing.

This isn’t the only time the government has stopped highly hyped knockoffs from getting to market. In fact, just last year, the Department of Homeland Security confiscated a hoard of counterfeit Nike and Louis Vuitton sneakers estimated to be worth an eye-popping $472 million.