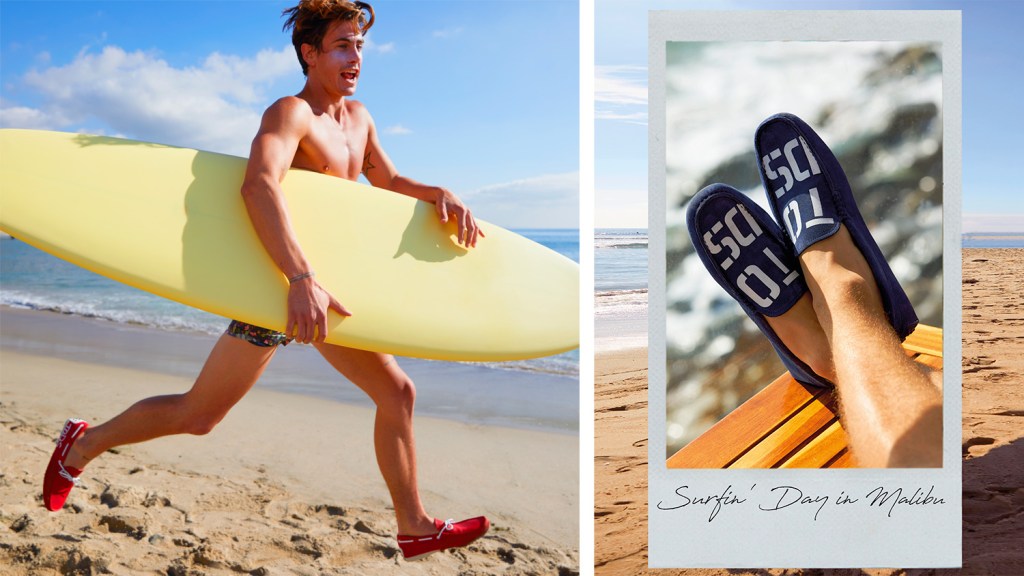 The promise of California—think sun-drenched beaches, laid-back locals, and a slow, spontaneous pace of life—has long proved a treasure trove of inspiration for creatives across industries. This season, fashion has become particularly taken with the Golden State—with designers like Louis Vuitton and Saint Laurent swapping the skate-culture motifs that have reigned supreme for the past few seasons (thanks in part, to the industry’s love affair with streetwear) in favor of sandy, surf-inspired prints and pieces.

The latest brand to catch the California bug is Tod’s, which released a capsule collection of surf-inspired leather goods earlier this month. An effortless mix of the brand’s cosmopolitan Italian aesthetic and casual-cool vibe of old-school California, the collection centers around playful twists on the classic Gommino moccasin.

The iconic style has been rendered in a mix of leather, suede, and scuba-inspired inserts offsetting a graphic take on the Tod’s logo. Though the shoe comes in four colorways ranging from a seafoam gray to sleek black, we’re particularly partial to the Baywatch-red moccasin ($675), which will add a kick of personality to breezy linen outfits and nod to the lifeguard iconography that dots California’s beaches when worn with a funky pair of swim trunks. This amplification of Tod’s typically discreet logo makes its way throughout the rest of the capsule collection—with a stamped, surplus-style version adding a punch of visual interest to buttery tan and navy-blue suede moccasins ($545 each).

Though the leather and suede Gommino styles are all beach-inspired, we wouldn’t suggest actually slipping them on for a long walk along the sand. For a style that can take you from the bar to the beach seamlessly, throw on the denim slip-ons ($575). Also stamped with the surplus logo, the style mixes a dark denim upper (meaning you’ll be able to wear it with almost any pair of jeans) with handmade woven cord accents and a durable rubber sole embossed with the brand’s signature pebbles. Pair the shoes with a vacation-inspired camp-collar shirt to put you in that California state of mind—even if a trip to the coast is off the table.