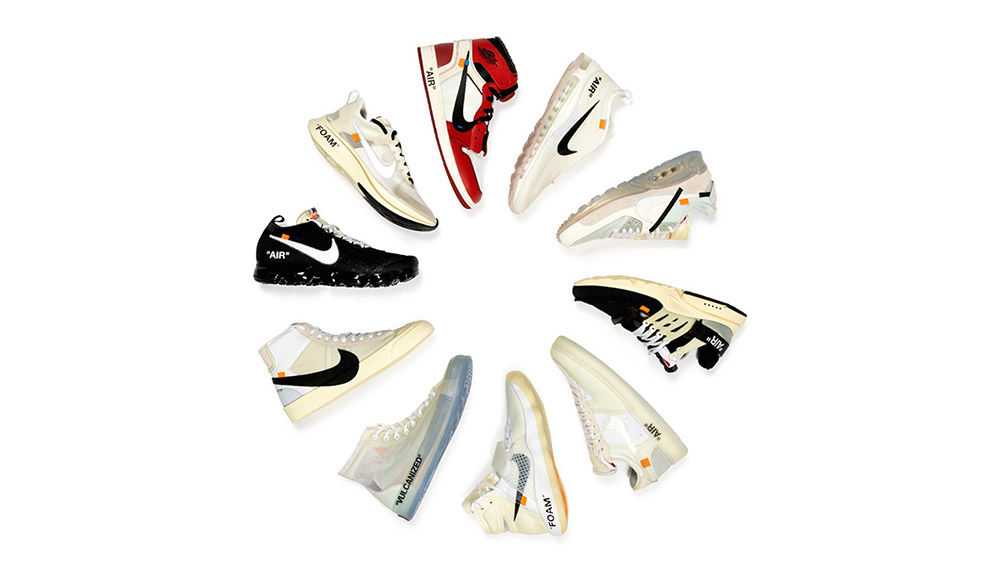 In 2017, the late, great Virgil Abloh released a line of deconstructed Nike icons known as “the Ten” and subsequently changed the sneaker industry forever. Now, the indelible collection is being offered in full at Sotheby’s upcoming Modern Collectibles auction.

Billed as one of Nike’s fastest and most ambitious collaborations, the Ten took about ten months from ideation to release. It was also the first time the legendary Black designer, who died of a rare and aggressive form of cancer last November, worked with the footwear giant under his label Off-White. For the collection, Abloh delivered atypical versions of 10 classic Nike kicks—and this is likely one of the very few complete collections.

The ten are divided into two different categories that relate to the construction and design of each shoe. The “Revealing” five, which includes the Air Jordan 1, Air Max 90, Air Presto, Air VaporMax and Blazer Mid, were designed to look hand-cut and feature text such as “air” and “shoelaces” on the exterior.

As for size, the pairs range from a US 10.5 to a US 11.5. All sneakers are in pristine condition, without any signs of wear, and come housed in the original box. What’s more, Sotheby’s says all sneakers on offer are deadstock, which means the designs are no longer in production.

“Today, ‘the Ten’ serves as a blueprint to understand not just footwear design, but all design and has left a lasting impression on sneaker culture,” the auction house writes on the listing.

The sought-after collection is expected to fetch between $30,000 and $40,000, with bidding wrapping up in 10 days on March 31. The final hammer price could be even more, too, considering one pair of Virgil Abloh’s Louis Vuitton Air Force Ones recently sold for a record $25.3 million at auction.