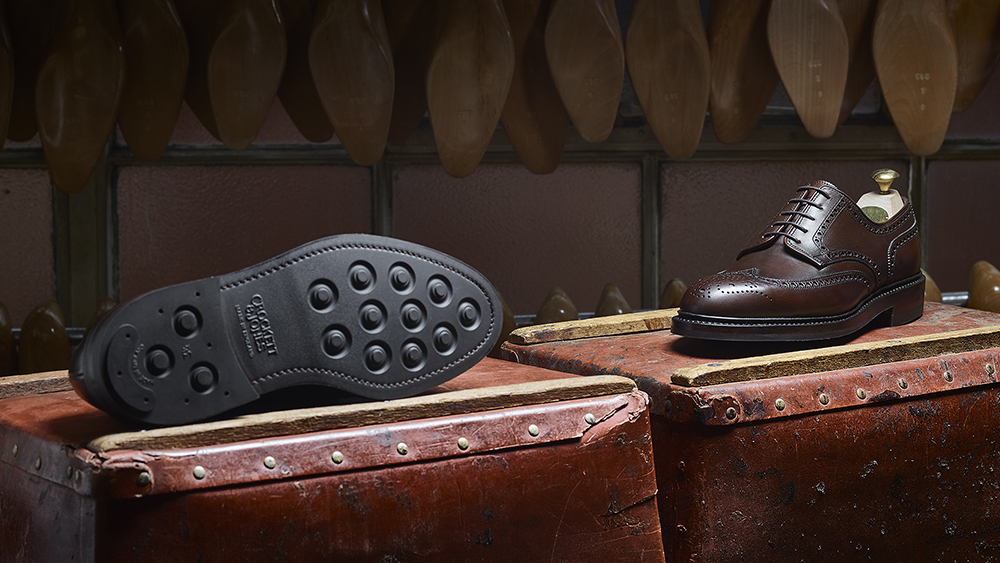 British menswear is synonymous with hearty wools and spongey tweeds, but there is another native-made component that’s just as quintessentially Anglo yet the recipient of far less attention: the Dainite rubber sole.

For roughly a century, the iconic sole—which is easily identified by its studded design—has been produced by Harboro Rubber, founded in 1894. The company is located in Market Harborough, just a brogue’s throw from the English shoemaking capital of Northampton, and it’s no coincidence that makers like Joseph Cheaney & Sons, Loake, Church’s and Crockett & Jones have all utilized the Dainite sole in their designs.

Technically speaking, there is no single “Dainite sole.” Dainite—a portmanteau of “day and night” owing to the rubber mill’s constant output—is the trade name given to a range of soles produced by Harboro Rubber. However, it’s most commonly used to refer to the range’s studded sole.

To learn why the Dainite sole has become so synonymous with English shoemaking, we enlisted the aid of a man uniquely qualified to speak on the subject. Jonathan Jones is the marketing director of Crockett & Jones and is among the fourth generation of his family to work in the company. For Jones, Harboro Rubber is something of a family business, too: It was founded by his great-uncle and today is chaired by one of his cousins.

As Jones explains, the Dainite sole differs from a typical rubber sole in that it is not a “unit sole,” meaning a one-piece molded sole made entirely from rubber. Instead, it is built like a traditional dress sole complete with leather heel lifts and a stitched Goodyear welt. The difference is that it is finished by a rubber “top piece” that provides all the utility of a rubber sole while allowing for a dress-shoe appearance from almost any angle.

“When you see it from the side profile, it’s a lot smarter…most of the rubber soles that you see out there are just pure rubber and a lot more simplistic,” he says.

Furthermore, the existence of the Goodyear welt means that any shoe with a Dainite sole can be resoled, greatly extending its lifetime. Crockett & Jones, which features the studded Dainite sole in styles including its Ashdown derby, Tetbury chukka and Chelsea 11, resoles shoes from customers across the world via a repair service based out of its Northampton factory.

And then there are the studs: The recessed dots provide extra traction on slippery streets but, unlike lugs, won’t pick up dirt or mud that could be tracked into the office later. In other words, an ideal city shoe in inclement weather.

However, should you wish to marry that studded factor to a more polished look, Crockett & Jones produces styles with a “city sole” made exclusively for the brand by Harboro Rubber. The sole, which was introduced in 2016 and designed by the shoemaker, features a trimmer rubber sole marked by more level studs. It appropriately features in smarter styles like the Connaught 2 oxford and Boston penny loafer.

While Jones adds that consumers are increasingly favoring rubber-soled shoes with each passing year, the Dainite sole is not a new development for his company. Crockett & Jones began outfitting its chukka boots with them in the 1980s, a decision made by Jones himself.

And though the use of Dainite soles is not confined to Northampton—it has also been employed by American makers like Allen Edmonds and Oak Street Bootmakers—its distinct provenance remains a key part of its appeal. As Jones says, Dainite’s X-factor “is that it’s unique, and British made.”