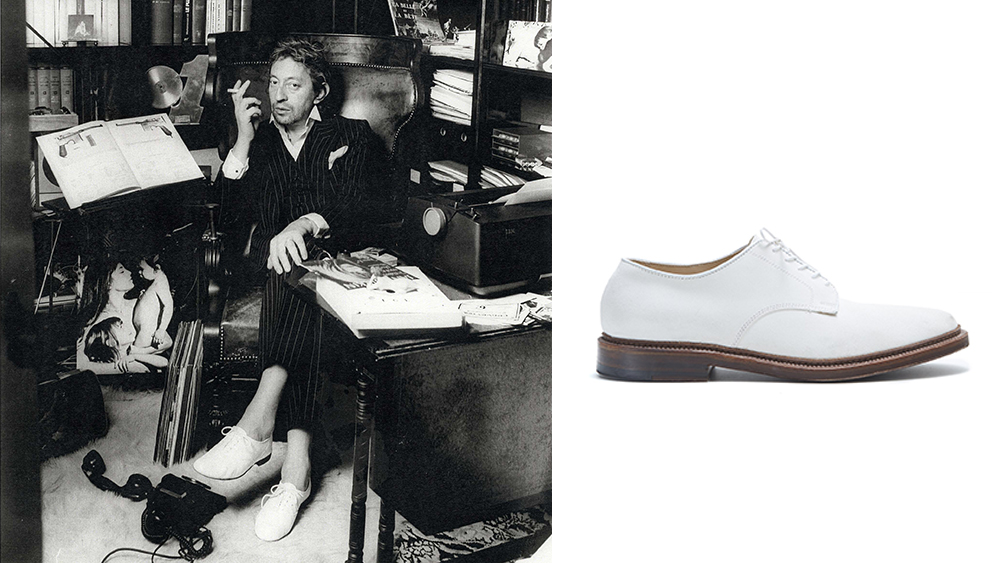 We’re in the thick of preppy this summer, with a plethora of styles—in color, cut and spirit—looking to New England for inspiration. This new age of Ivy Style is a prime time to venture into the wide world of white shoes. And we don’t mean sneakers—real, proper shoes.

If you shy away at the thought, you’re not alone; for some misguided reason, otherwise adventurous guys avoid white shoes as if they’re Mukluks or Crocs. But consider the list of menswear luminaries with a penchant for colorless footwear: Fred Astaire, James Brown, Tom Wolfe, David Bowie, Errol Flynn, the Aga Khan. These great men have proven that white shoes are a sartorial power move. And while it’s easy to imagine yourself coming off whimsical or contrived, know that white shoes have been a part of American fashion for a very, very long time.

Bucks are a recommended gateway into white-shoe territory. Named for their nubuck leather construction—a buffed calfskin that has the velvety texture of suede but the hardiness of standard leather—white bucks were once an Ivy League staple, favored by 1950s college kids and rocked by doo-woppers like Pat Boone (also known as “The Kid in the White Bucks”). In 2020, they’ve shaken the goody-good attitude and go well with everything from selvage denim to seersucker.

Writer David Coggins is such a fan, he put a pair on the cover of his bestselling book Men and Style. It wasn’t always that way, though. As Coggins tells us: “I was originally intimidated by my first pair of white bucks,” but after a few weeks, “I couldn’t imagine my life without them.”

“I think men are understandably reluctant to wear shoes that seem blazingly white,” he adds.“ It takes a sense of fearlessness at first. They look immaculate and impressive, but they truly ascend to white buck heaven when they get dirty and become your own.” Like a waxed Barbour jacket, half the fun of owning white shoes are the beats, blemishes and imperfections, which Coggins calls “sartorial scars.” His own, the Aldens on the cover of Men and Style, “are now destroyed and decidedly gray!”

You can follow Coggins’ lead and buy yours from New England’s Alden, who do a definitive white buck as well as a summery unlined version in collaboration with Todd Snyder. The inimitable Mark McNairy has a handsome brick red-soled version in his spring collection and, for a stronger nod to the clubhouse, Church’s offers a rakish white suede penny loafer—a close cousin of the buck.

It’s also worth considering the white dance shoe this summer. These slim, low-rise oxfords rose in popularity during the dandyish Jazz Age and were favored by Fred Astaire, as the color helped audiences follow the dancer’s footwork. Because of their sleek profile, dance shoes look best when paired with wider cut pants. Like an ultrathin dress watch, the contrast in proportion balances the delicate nature of the shoe and gives them a stronger presence.

“That super minimal aesthetic makes [dance shoes] easy to style across several different looks, too,” says Mark Higgs, brand manager at England’s Crown Northampton, which has an artfully crafted whole-cut pair in its robust ‘Jazz’ collection. “Over the past few decades, the range has gained a loyal fan base, especially in Japan,” where much of the recent Ivy Style revival owes some of its momentum.

For the most pedigreed iteration, look to the Parisian house of Repetto, which has been outfitting actual dancers since 1947. Their white ‘Zizi’ model has long struck a note with rockstars from Mick Jagger to Mark Ronson and, most famously, the Gallic crooner Serge Gainsbourg. When once asked by a French journalist how many pairs of the shoes he owned, Gainsbourg replied: “Repetto à perpète [forever Repetto].”

That’s what the white shoe does. Like the re-discovered Fun Shirt, they’re a playful—yet wearable—style that inspires one to be a bit more open-minded when it comes to matters of dress. As evidenced by the men who love them, white shoes’ secret is simply having the sartorial confidence to put them on. As Coggins says: “I think the first time you wear them you feel self-conscious, the second time you feel better and the third time, it’s your signature shoe…People will recognize you as the man in the white shoes. And that’s a good thing!”