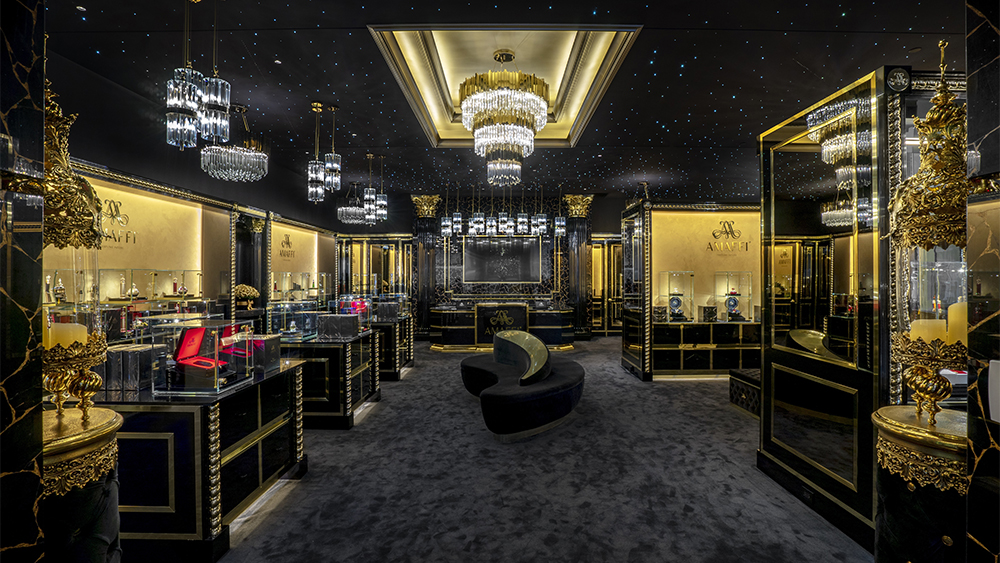 Fragrance is often the gateway drug to luxury. It is the aroma that lures you into a glossy boutique, packaged as meticulously and sold as ceremoniously as the five-figure garments hanging on a rack upstairs. Perfumes offer entrée to this gilded world, usually for a fraction of the cost of anything else on the same salesfloor—a modest amuse-bouche before the real decadence. But what if the perfume was the main course? At Amaffi, fragrance is all that’s on the menu and it’s served like the finest Beluga caviar (with prices to match).

While the past decade has seen a boom in indie fragrance brands, Amaffi takes it to a distinctly headier altitude. Founded in Switzerland six years ago, the “perfume house” operates stores in London and Moscow and, as of April 16, in New York, with a flagship fittingly located on the stretch of 57th Street known as Billionaire’s Row. The soaring space is outfitted like a Faberge egg by way of a Monaco discotheque—all gilt and crystal and black lacquer—and is unlike any perfume shopping experience you’re likely to recall. Mainly, that’s because Amaffi’s elixirs are extravagantly bottled (more gilt, crystal and a smattering of Swarovski) and kept under lock and key behind glass vitrines, spot-lit on plinths like the jewels around the corner at Van Cleef & Arpels.

These fragrances may not be as rare as Van Cleef’s rocks but, as far as perfume goes, they are exceptionally precious. Amaffi adheres to standards that are pretty much unheard of in the industry. The brand exclusively uses natural ingredients—meaning there are no synthetic molecules, which are a mainstay in even the most luxurious fragrance collections. It’s an unpopular choice because it is, by most definitions, prohibitively expensive although it yields particularly rich scents with unrivaled staying power. When you smell a rose scent at Amaffi, for instance, you’re actually smelling several tons of flowers that have been distilled down and bottled. The formulations forgo the use of water, which can also weaken a fragrance’s impact, and average a 20 percent concentration of pure perfume. There are no eaux de toilette, no trial size testers. Everything at Amaffi is full-on.

It harkens back to the early days of perfumery when fragrance could only be made out of natural ingredients and was a luxury reserved for an elite few. Amaffi purports that this is its heritage, though the brand’s backstory is somewhat opaque. The founder and namesake is a woman known only as Madame Amaffi, who, according to a statement, was inspired to launch her own fragrance company after her great-grandmother let her in on an old family secret.

Legend has it that one of Madame Amaffi’s female ancestors was working as a perfumer when Napoleon plucked her to work for him exclusively. She created the emperor’s signature scent but, long story short, he ordered her to be executed and she fled, renouncing perfume forever. If the story sounds too titillating to be true, that may well be the case. Regardless, I’d watch the Netflix original.

Mysterious Madame Amaffi and her brand that seemingly came out of nowhere (with a flagship on one of Manhattan’s most prestigious blocks of real estate, no less) has sparked heated debates among the internet’s fragrance fanatics. Reddit’s perfume lovers have some equally vivid conspiracies about who the real Madame Amaffi is. Research hasn’t provided much clarity on the matter but the appeal of Amaffi’s fragrances is as clear as its crystal flacons.

On a visit to the store ahead of its opening, I was guided through the collection like it was a fitting. Unlike the usual, formulaic drill (“Do you like woody scents? How about citrus?”) the personable salesman asked me for the names of perfumes I’ve worn, drawing on his vast knowledge to pinpoint what I might like best. His first suggestion was “Havana,” a warm, powdery scent that balances notes of tobacco and leather with green davana, cut with a subtle hint of heliotrope’s sweetness. His first guess was spot on—I loved it.

Another standout was “Intrigant,” which combines vetiver and oud in a scent that might be better titled “C.E.O.” It smelled like pure, masculine power—in the very best sense. At $4,300 each, these are both toward the higher end of Amaffi’s range, which starts around $2,800. At the top of the line, “Glory for Men” tempted with a nuanced blend of cedar and amberette for $7,100. In case you were wondering, each of the extravagantly proportioned bottles is sold with a more manageable travel size—Amaffi’s concession to the concerns of everyday life.

All of the scents were impressively powerful. Almost a week later, the test strips that I’d received during my visit were still potent. Whether your definition of luxury includes a four-figure spritz is another, not insignificant matter. But if it does, Amaffi is undoubtedly the place to go.

Introducing ‘Uncommon Scents’: The 5 Best Men’s Fragrances to Wear at the Office

The 7 Best Razors for an Ultra-Close Shave