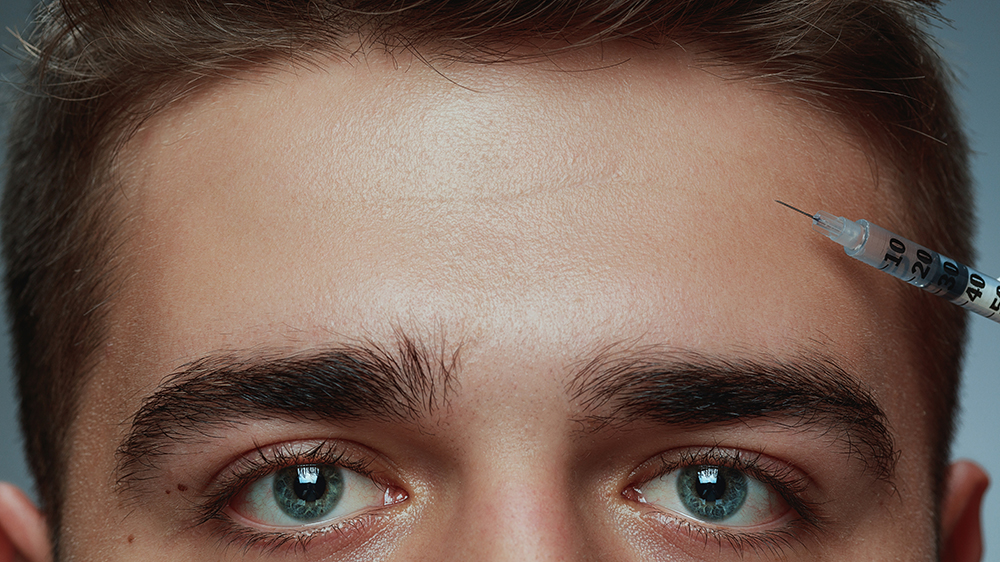 With each passing year, more and more people are injecting Botox beneath their skin. The American Society of Plastic Surgeons now ranks the injections as the most popular minimally invasive cosmetic procedure in the country, with 4.4 million sessions booked in 2020 alone.

And given how much time many of us have spent staring at our own faces on Zoom over the past two years, that’s not a surprise. A number of things contribute to those expression lines across the forehead and at the corners of our eyes. Layer a lifetime of movement and expression over the skin’s natural decrease in collagen and oil production, as well as decreased fat levels in the deep layers of skin tissue, and some wrinkling is inevitable. But if you’ve spent a lot of time in the sun or been exposed to the kinds of environmental toxins that compromise the skin, and the lines may become permanent.

So whether you’re 25 and considering prevention, or 45 and interested in shaving a decade off your brow, you may have wondered whether Botox is worth it. For the uninitiated, there is a trove of questions to ask: How exactly does Botox work, how long does it last and what will regular injections do in the long run? Sure, we’ve all had a laugh at someone who can’t move his or her forehead, but will that person get the last laugh at age 75, when they look 20 years younger than the rest of us?

If you’re on the fence, or if you’d simply like some general Botox 101, then furrow your brow no more: Here’s a primer on Botox from one of the most trusted docs in the business: John Layke, D.O., plastic surgeon and co-founder of Beverly Hills MD.

What Does Botox Actually Do?

The end goal of Botox is to disappear or prevent wrinkles and fine lines. But how exactly does it accomplish that goal? “Simply, Botox blocks acetylcholine receptors from the nerves,” says Layke. In other words: Botox prevents your facial muscles from moving, and thus, from folding and wrinkling the skin. And as a bonus for oily skin types, it can also reduce sweat or oil production in these areas. However, for many patients, and primarily men, the goal might not be to totally inhibit muscle movement

Who Botox Is For, and Where Does It Go?

Most people are good candidates, notes Layke. On the one side, there are people looking to prevent the formation of these fine lines (people in their 20s), while anyone in their 30s upwards would be in the other camp, trying to offset existing lines and prevent further progression. Layke says the assessment is made based on “visual age” however, since two people at the same age may experience wrinkle formation and progression differently, for a variety of reasons.

While Botox has uses beyond wrinkle prevention (like preventing profuse sweating in the armpits), its cosmetic use targets four spots around the face: The crow’s feet at the eyes, the glabella (between and right above the eyebrows), the bunny lines (around the nose), as well as the forehead.

Who Shouldn’t Get Botox?

Certain muscular and nervous conditions preclude Botox, Layke says, such as MS and ALS. He also advises against Botox use on anyone whose brow is “too heavy … Many times, Botox can worsen this, and a brow lift and/or eyelid surgery will be the better solution,” Layke says.

How Long Does Botox Last?

Layke says you should enjoy the full benefits of each dosage for three to four months. After that, your facial muscles will slowly regain mobility. It will take a few days for the Botox to begin working, after which it will peak at one week.

How to Know You Have Good Results (and a Good Doctor)

The results will speak for themselves. “A good job means that no one knows you have Botox in place,” Layke says. “The eyebrows have a gentle arch in females, not an angry or confused look. Males should still have movement. The idea with proper neurotoxin usage is that you will still create lines with animation. However, in repose, the upper third of the face should look smoother and more youthful.”

While Layke notes most people will experience redness and minor discomfort at the injection sites, there are other potential side effects like eyelid lag that some people endure. Similarly, facial asymmetry is one risk you run and may be a primary indicator that you didn’t visit an experienced, reputable doctor. (Better luck next time?)

As it is injected, Botox delivers a tiny pinch, Layke says. It’s not too difficult to endure, though, since it’s only a 33-G needle (which has approximately 0.1mm interior diameter).

How Much Does Botox Cost?

You’ll need to check with your local providers because Layke notes the price shifts dramatically based on demographics and geographics—not to mention your clinic’s reputation. On the low end, he says to expect $350 per session and $1,200 on the upper end.

How Much Botox Should You Get?

“Typical amounts used are 12 to 20 units in the glabella, eight to 24 units in the crow’s feet and 10 to 16 in the forehead,” Layke says. Of course, your doctor will be able to determine how much you need for any and all locations.

Like Kleenex, Xerox and Frisbee, the word Botox is a trademarked term so widely recognized for its purpose that it’s become a catchall for its class of products. These include Xeomin, Dysport and one of the latest, Jeuveau. Your doctor will be able to determine which product is best for you based on their nuances, but Layke has a bias for one in particular: “Most have a shorter duration and efficacy than Jeuveau,” he says. Still, only upon examination will your doctor be able to prescribe the best fit.

Botox and fillers are not the same. “Botox inhibits muscle contraction, and fillers add volume to areas that are deficient,” Layke explains.

The skin at the Botox site will not thin or atrophy over time. “The only thing that would atrophy would be the muscles themselves,” Layke says. And that would be welcome!”

While you may experience a decrease in local sweating and oil production on the forehead, Botox won’t increase perspiration around the body. Yes, the sweat will be excreted one way or the other, but your armpits won’t suddenly turn into a fire hydrant.

Your skin care regimen should not change with Botox. Unless, of course, it was a subpar regimen in the first place; you certainly should prioritize anti-aging measures across the board if you’re also willing to invest in Botox. And because it may decrease your natural oil production, you should counter that with hydrating products.

“Botox is not a poison,” Layke says. “Although it is made using botulinum toxin, it is a purified protein that blocks the neuromuscular receptors.”

So, Is Botox Worth It?

Here is Layke’s fairly direct conclusion on Botox: “It should be considered the best drug we have for anti-aging.” Few products can bring an instant halt to wrinkling. And while a lifetime of retinol, serums, SPF application and sun avoidance can go a long way (and should be practiced regardless), each person has to assess their own variables to decide if Botox is the right solution. Just like you need to weigh the pros and cons of hair retention methods to keep your hair density, no superficial choice is ever entirely obvious. If it was, well, then we’d all have Botox. But as more and more of your friends count themselves among its fans with each passing year—while the crow’s feet gather at the corners of the eyes—that solution starts looking a lot more attractive.

“Botox is a single solution,” Layke says regarding its value as an anti-aging tactic. “But [ongoing] skincare and improvement of the dermis are also necessary [regardless of Botox usage]—like micro-needling and light peels.”