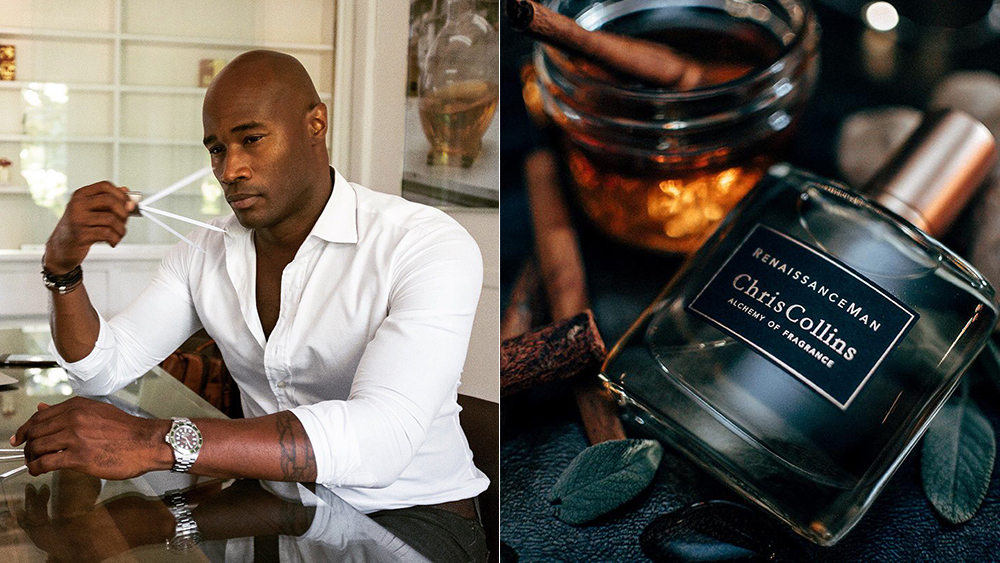 The story of Chris Collins’s eponymous fragrance line starts, as so many of the best tales do, at a restaurant in Paris.

The businessman and former model—who you may recognize from his two-decade-long stint as one of the faces of Ralph Lauren’s menswear—was dining with a friend in the City of Lights when he mentioned a desire to create his own line of scents.

“I remember saying I would love to create perfume the way musicians play music,” Collins tells Robb Report. “My friend responded by explaining how close Grasse was and let me borrow their car to drive there and explore the options. I had no plan, just my ideas.”

But after sifting through the possibilities in Grasse, the idyllic French Riviera commune whose jasmine fields gave birth to Chanel No. 5, Collins struck a deal with the manufacturer Argeville. “[They were] small enough at the time to be open to my ideas,” he said. “They trusted me throughout the entire process and were the first to work with me to produce the Renaissance collection.”

That collection, launched in 2018, was inspired by the Harlem Renaissance, the 1920s and ’30s era which saw the New York City neighborhood Collins calls a home base flourish artistically. It included three sophisticated eaux de parfum: Renaissance Man, Harlem Nights and Danse Sauvage, each inspired by the era’s creativity and spirit.

Since then, Collins has released additional collections, including a line of extraits de parfum. It’s a formulation you don’t often see on the shelves of luxury department stores. (These typically include an oil concentration between 20 and 40 percent, compared with the 15 to 20 percent in eaux de parfum and the two to four percent found in colognes.)

“It wasn’t until I began working with the perfumers in Paris that I realized that parfums have levels,” Collins says. “I wanted all of my fragrances to be intense but not overwhelming. When you use great materials you can go to high levels and balance the sillage.” Of course, this means that these fragrances also cost more than your standard-issue luxury scents: the bottles in this collection will set you back $225, while his eaux de parfum go for $175.

“To me, luxury isn’t a dollar amount. It’s a feeling,” Collins says. “Working with Ralph Lauren taught me a lot directly and indirectly about luxury and branding. Ralph was never trying to sell an item, but more so an experience.”

Collins and Lauren became close during their time working together, and that the designer supported his decision to start his fragrance business. But beyond the blessing of one of the greatest minds in luxury, Collins’s fragrances are also distinct because they’re each deeply personal.

“Every fragrance and collection I’ve created comes from a very personal place for me—they all tell a story,” he says. “For example, Tokyo Blue was named after a jazz song my dad listened to, and the Dark Romance collection is inspired by the dark side in all of us. Most of my fragrances are unisex but generally appeal to those who live with imagination and appreciate a unique perspective. They come from all over the world.”

It’s an approach that’s attracted not only major retailers (Bergdorf Goodman was the first store to pick up his fragrances, followed by Neiman Marcus and Nordstrom), but also a dedicated customer base.

For my part, I’ve been wearing and enjoying Rennaisance Man for over a month now, and its notes of cinnamon and tonka bean resonate with me. From the Dark Romance collection, Tokyo Blue stands out to me as the most distinguished of the four extrait de parfums—it’s key notes of bergamont, violet leaf and orange blossom offer a much lighter scent that balances both sweetness and freshness. The brand’s extrait de parfums will last practically an entire day on your person, while the other collections appear to last a solid six hours before fully airing out.

“I’m creating fragrances for those who love to feel luxurious,” Collins says—and the pandemic hasn’t slowed him down. He’s got a line of home fragrances on the roadmap for this year, and is considering setting up a boutique in New York City.

“I’m very thankful for the upcoming opportunities after the year we struggled through in 2020,” Collins says. “Definitely expect a few more launches this year.”