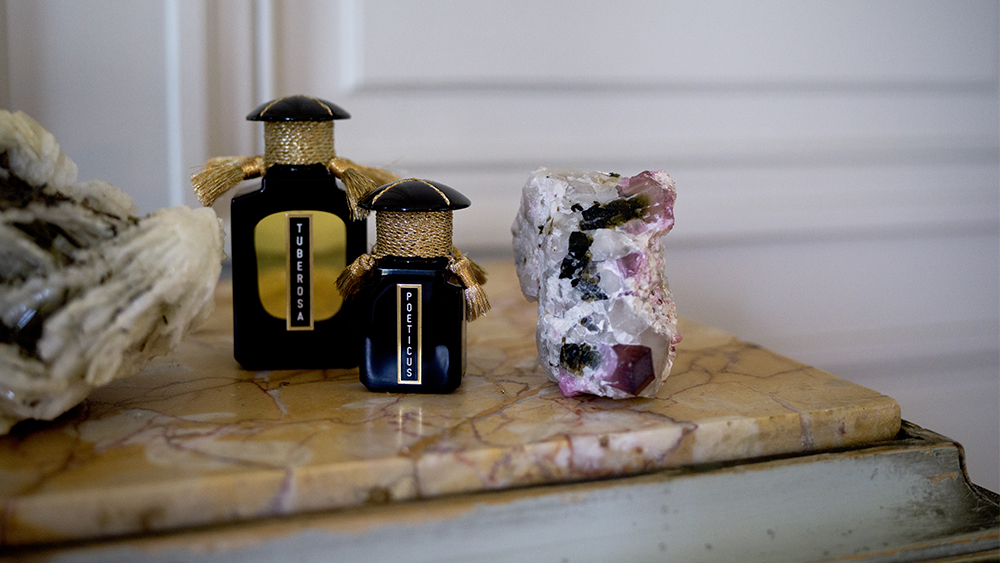 It’s commonly said that scent is personal, but for Holly Tupper, the founder and nose of Cultus Artem, a boutique fragrance house based in San Antonio, TX, that is true in a multitude of ways. In addition to developing the range of rich natural scents, Tupper personally oversees everything from production to packaging.

The entire brand—design studio, salon, lab, production and packaging facility—is vertically integrated and housed in a single building, constructed in 1921 as a telephone exchange. It’s like walking into a laboratory wedged inside an art museum: On one floor, pristine rows of test tubes and instruments; the next is full of paintings and design documents; on another, a library of individual scent ingredients and a nineteenth-century copper bathtub (a gift from the building’s previous occupant, an antiques dealer). Many brands outsource production to third parties, Tupper explains, which makes her one-woman show particularly unique.

Cultus Artem is shaped by Tupper’s background, which includes painting and fashion design, jewelry making and bond trading everywhere from New York and New Orleans to Grasse and Singapore. Her diverse resume provided surprisingly good training for her current venture. Searching for extremely pure pigments as a painter informed how she thinks about blending fragrances; working with individual stonecutters as a jeweler led her to seek out independent family distillation companies. Most simply, the perfumes themselves are inspired by Tupper’s aromatic encounters around the world.

Champaca, for example, has its origins in Tupper’s morning runs in Singapore, where she discovered a distinctive but unfamiliar floral note in the air, emanating from a local cemetery. The olfactory memory stayed with her until a chance encounter with it in a Balinese market, where she learned it was champaca, a fragrant South Asian magnolia sometimes called the yellow jade orchid tree. Hand-harvested wild champaca oil is central to the finished fragrance, which is enriched with ylang-ylang, davana and violet.

Fragrance is as deeply personal to wearers as it is to makers. It lingers on the skin and announces oneself to the world. Tupper laments the blandly pleasing, impersonal products that dominate the market. Her collection is made of strong, distinctive characters. “I wanted to make something for people who have made their minds up about who they are,” she says.

Finding your scent, like finding yourself, is not always straightforward. Tupper points out that the gendering of scents is a recent invention of marketing: Brut, after all, is a wildly popular masculine floral. And in any case, she explains, with natural scents in particular, skin chemistry plays a huge role. A spicy floral, like her Tuberosa, can smell delicate and sweet on one body but sensuous and bold on another.

The collection is packed with emphatic florals such as Amara, heavy with orange blossom, and Alba, drawing on magnolia and rose, but also features some innovative vegetal combinations. Ilex is a tea scent that departs from the familiar black tea-and-wood formula by combining the tannic power of South American mate leaf with smoky jasmine and a glint of neroli. Best of all might be Vetiveria, which stands out amongst the many vetiver scents that shimmer then fade, presenting real Haitian vetiver with a powerful, smoky backdrop of woods and a sharp note of lentisque.

This collection represents fifteen years of perfume development and inspiration, but Tupper shows no sign of slowing down. The morning we spoke, she was launching a luxury skincare range, designed to moisturize the skin while allowing scents to better adhere and project. As with Cultus Artem’s perfumes, it’s made by hand in small batches, packaged and dispatched, all from the San Antonio atelier.

Introducing ‘Uncommon Scents’: The 5 Best Men’s Fragrances to Wear at the Office

The 7 Best Razors for an Ultra-Close Shave