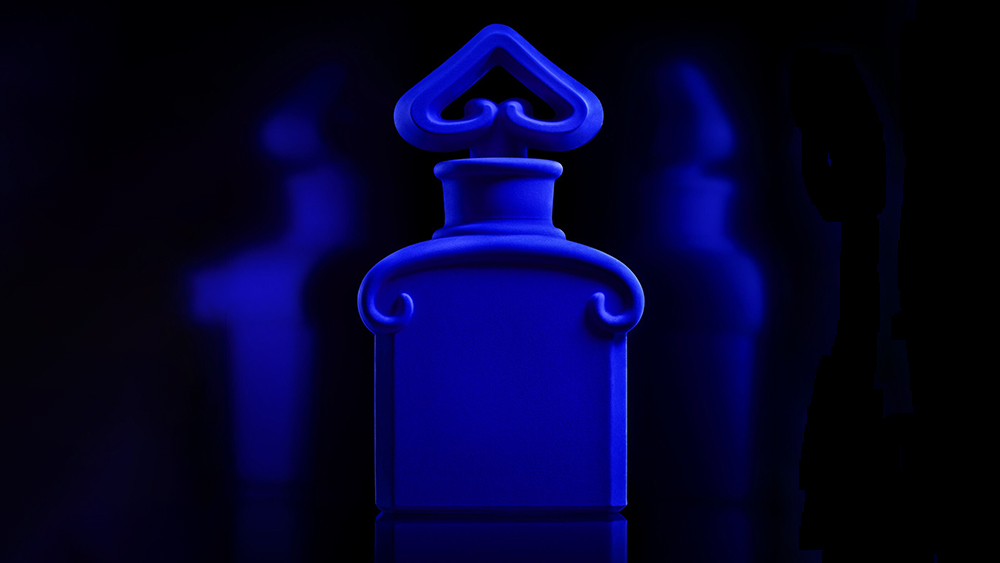 As Guerlain’s L’Heure Bleue fragrance celebrates its 110th orbit, the brand is partnering with the Yves Klein Foundation and releasing 37 limited-edition 1.5-liter bottles of the emblematic eau de parfum—but this time as a high-concentration extrait de parfum.

The partnership connects two singularities. First, there’s that arresting Yves Klein blue—formally known as International Klein Blue, or IKB. The artist described his signature color as possessing no dimensions whatsoever (believing that blue expands beyond the confines of all other colors). Equally unique is L’Heure Bleue, a powdery blend of resinous amber, bergamot and faint florals that debuted the same year that the Titanic sailed the ocean blue. The bottle, topped with an inverted-heart heart stopper, was designed by Raymond Guerlain as a nod to Art Nouveau.

Describing his masterpiece perfume, Jacques Guerlain poetically said: “The sun has set, but night has not yet fallen. It’s the suspended hour.” He famously found inspiration for L’Heure Bleue on an evening walk along Paris’ river Seine in summer 1912. It was, he said, “the hour when one finally finds oneself in renewed harmony with the world and the light.”

Klein, the Nice-native, Nouveau Realismé artist, was born in 1928, producing his signature ultramarine blue 29 years later. He cast the majority of his monochromatic works in this velvety, matte tone and even patented the color in 1960: IKB was officially his. Klein’s body of work is on display in the world’s most prestigious museums, from the Tate to the Met. And now, more than three dozen people will bring his vision into their homes, with these exceptionally large and true-to-the-original bottles. They have been sanctioned by the Yves Klein Foundation to be painted in that multi-dimensional (and yet dimensionless at the same time) International Klein Blue.

As of October 1, each limited-edition bottle will retail for $17,000 on Guerlain.com in the US, or in Guerlain boutiques internationally. Three bottles are available for the American market, and another 34 will be distributed worldwide. As an extrait de parfum, a little spray of this formulation goes a long way, due to the higher concentration of perfume oils present. That means that this work of art, in its size and richness, will serve two purposes for years on end. And even after you run out of the fragrance it houses, you’ve still got the official IKB-painted, Guerlain-designed sculpture to showcase at home. Each bottle is also adorned with a silk thread and wax seal, affixed by specialists at the Guerlain ateliers.

Traditionally, L’Heure Bleue skews feminine. It opens with crisp bergamot and sweet anise, has a bouquet of floral notes at heart (along with spicy clove), and simmers for hours with its powdery-iris, vanilla-gourmand, richly resinous base. But we’d say this is one beauty that can be universally appreciated.