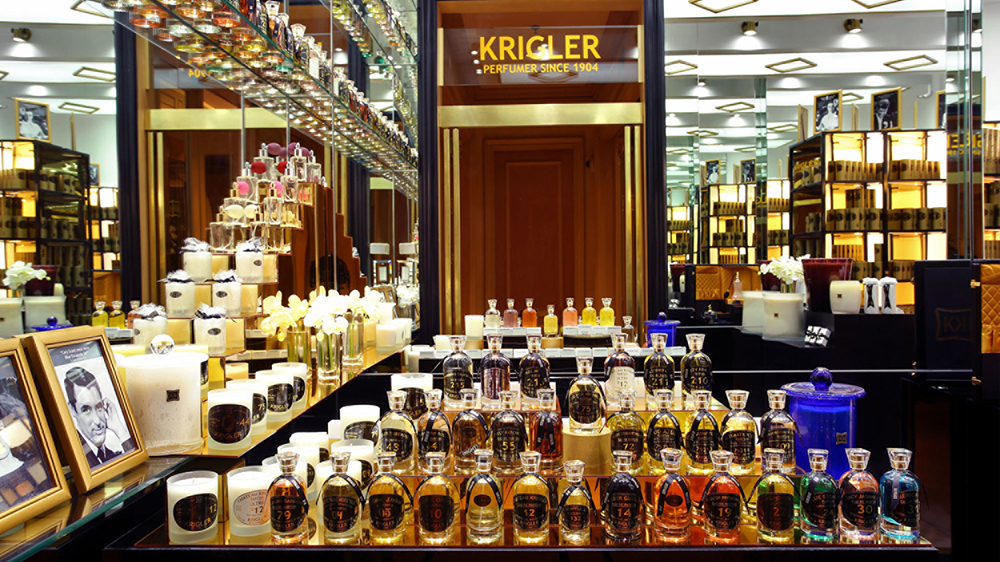 The who’s who of Hamburg flocked to the Fairmont Hotel Vier Jahreszeiten in May for the prestigious property’s quasquicentennial celebration. More than a thousand guests reveled from the basement kitchen to the penthouse suite, commemorating a hospitality legacy 125 years strong. And just inside the lobby, flanking the red carpet, was another German legacy label (well, a German-French-American one, at that): the haute parfumerie Krigler, with its tenth and newest boutique, opened inside Vier Jahreszeiten in time for the celebration.

Krigler is itself 118 years old, and this opening was actually a return to the city, as fifth-generation perfumer Ben Krigler clarifies. “Basically for the past 20 years, my goal has always been to redevelop Krigler as it used to be, during the golden years, and to organically open boutiques where Krigler has a meaning. At this time, we are opening stores where we used to be. Only a few stores in the US are brand new.” One of those properties in the US is another Fairmont-managed staple: NYC’s Plaza Hotel. As for Vier Jahreszeiten, Krigler notes that the hotel is family-owned, much like the fragrance house itself: “It is the perfect marriage.”

The roster of Krigler boutique locations presents an obvious pattern: The perfumery prefers top-tier legacy hotels as home. (In short, it’s lots of Fairmont, Four Seasons, Kempinski, plus a Ritz Carlton and Peninsula for good measure.) “Krigler is known as the Parfumeur of hotel palaces,” Krigler says. “The first boutique in 1905 was opened in the Victoria Hotel in Berlin, and since then, hotels have been part of our history. We are only located in hotels. It has that idea of a very discreet visit, of traveling away from home without traveling away from home.” Plus, as he points out, the Krigler clientele is as international as the brand itself. “They travel the world. They visit our stores and mention that they know us from another city. We are part of their souvenirs, their trip to the city.”

The next boutique will be at Grand-Hotel du Cap-Ferrat in the French Riviera, followed by multiple openings in Florida. The year will tally five new boutiques in total, each of which Krigler, an architect by training, designed.

While each boutique carries the Krigler aesthetic—think black, gold and mirrors—they are also adapted to their specific spaces. The Vier Jahreszeiten’s for example is found directly in the lobby of the hotel itself, an inviting and open-faced corner with a friendly clerk providing sample spritzes while showcasing the fragrances, candles and soaps. Typically, a new fragrance accommodates each opening; Hamburg’s is a yet-announced scent set for late June. This pairing adds to the “collecting” aspect of the label, encouraging loyalists to claim each location’s unique scent as an olfactive souvenir.

If you find yourself at any Krigler boutique—currently, that’s Berlin, Munich, Hamburg, Vienna, New York, Chicago, Beverly Hills, Palm Beach, San Francisco and Houston—be sure to ask the clerk about the Silver Tray collection. This is a peek at the experimental side of the label, wherein certain fragrances are only available in certain locations. They might be slight variations on existing scents, “preview” picks of possible future releases or some limited-edition run that you’re supremely blessed to come across. It’s a sharp contrast to the official, public-facing fragrances as well as the more exclusive bespoke options offered by the label; it’s a more playful alternative, powered by happenstance and every bit as unique.