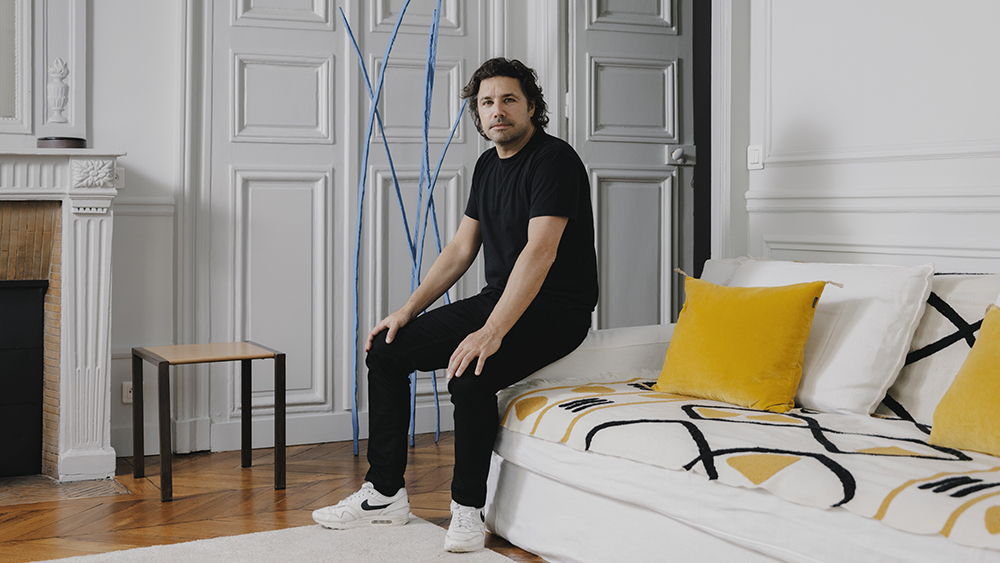 Perfumer Aurélien Guichard divides his time between a Parisian apartment overlooking the Jardin du Luxembourg, where he spends much of the year, and Grasse, in the South of France, where he was born. The latter is commonly regarded as the epicenter of the fragrance universe and is where he now has a farm growing organic roses—along with an atelier he shares with his artist mother. Perfume runs in the family: His father, Jean Guichard, created several famous fragrances, and Aurélien studied at the heralded Givaudan Perfumery School in Paris, subsequently working with brands such as Davidoff, Gucci, John Galliano and Valentino before starting his own line, Matiere Premiere (“raw materials”), which focuses on the use of a single prominent ingredient.

I open my window. I breathe the air of Paris—or wherever I am. And then I smell the perfume I’m working on, on the blotter I’ve put down the night before. Because, you know, you can smell things differently first thing in the morning.

Instagram, for sure. I’m very interested in hearing the opinion of people who aren’t experts, and you can find that on social media.

Do you like to be driven or to drive?

I like to drive—a Piaggio MP3 motorbike in Paris and a classic green Defender 110 with a white roof in the South of France.

Where do you shop for clothes?

I always go to Bon Marché, and I tend to buy the same brands. Acne is one that I like. I love Uniqlo, too—something practical, you know, and simple. For shoes, Church’s, and Nike for sneakers.

I would like to think simple with a sense of sophistication.

A glass of wine, usually. Maybe Cuvée Rosé by Château des Selves near Callian, made by the Christine family from Provence, the taste of my native region. Or a Saint-Pourçain from Bourbonnais. Simple and beautiful—great with friends.

Do you have a guru?

I think, in a way, it’s my father. Not for what he created—of course, I love what he did, but I would be incapable of creating the same thing. More for the philosophy that he had behind his work. I grew up with someone who was truly a poet when it came to creation, and I feel our industry sometimes deserves a bit more poetry—or a bit less industry.

Gin and tonic. The amazing thing is the infinity of combination—no two are ever the same, are they?

I love Il Pellicano. It’s a great hotel by the sea which looks like it hasn’t changed for the past 50 years.

Where do you do your best work?

My farm in the South of France where we grow organic roses is very dear to my heart and my atelier there. I do my perfume, my mother does her art—together, in the same environment—and that’s something that I really love. She could also be my guru because she’s very free-minded. You need courage to create something—to do something on your own.

I love the little bottles that perfumers work with and that I’ve been working with for the past 22 years of my life. So when we were designing [the packaging] for Matiere Premiere, we just made a bigger-sized version of those little bottles.

A lot. You shouldn’t overthink ideas. It’s something that you feel. And I think if I feel it, there will be other people who feel the same way. And as I create for other people, I quite often follow my gut feeling.

What is always in your hand luggage?

I always have blotters, for two reasons. I’m usually working on some trials I need to smell. But also, I always stop in duty-free shops and smell what other people are doing, that’s interesting. And I even write with a blotter—I put a blotter under my hand to write straight.

What kinds of things are you happy to spend money on?

On a gift for my girlfriend. And I’m very happy to spend money on building things—like creating that farm in the South of France—and investing in something that is linked to nature. That really changes your life. Some people buy cars—I buy roses.

What’s luxury for you?

I like luxury that is not too visible, that is well made, that has a sense of uniqueness. I have a jacket, for example: simple, but if you feel the wool, I like that access to good materials. My parents have a house in Scotland near the island of Lewis and Harris, and we’ve been going there since I was a child. To me that feels like luxury, because not many people know it or go there. And not many people know what Harris Tweed feels like.

Do you binge on TV?

I have some friends who work in TV and film, and they just produced a series called Validé, about rap music. It was very interesting—about 20 episodes and I watched them in a day and a half.

A favorite game or sport?

Hockey has played a huge role in my life. Wherever I’ve lived—in America, in England, in France or in Spain—I’ve always met people and made friends through playing hockey.

Some of Guichard’s hockey sticks and sneakers  Laura Stevens

There’s one that I love: when you’re on a boat and it’s morning and you drink a hot coffee—I love that smell of salt in the air and the coffee. But I also have a memory from the farm where my grandfather grew jasmine and roses. At midday the workers came to get paid for the flowers they’d picked. It was very warm outside, and inside there was the smell of flowers, of the clay on the ground, some gasoline from the agricultural equipment. I feel that in beautiful smells, there’s always an element of darkness that can be a bit unpleasant but that drives your curiosity.

What music makes you happy?

All of Daft Punk.