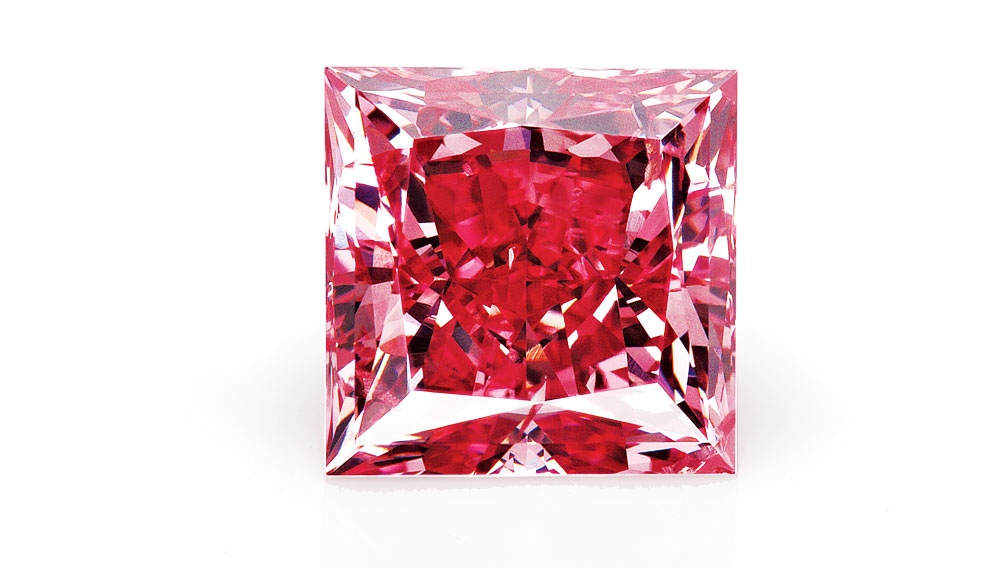 Two exceptional pink diamonds from the legendary Argyle mine in Australia, each weighing more than 2 carats.

A custom jewelry piece featuring the pink diamonds and designed by Kristin Hanson, a New York jeweler who specializes in colored stones.

Pink diamonds are among the rarest stones on Earth. Most of them come from a single source in Australia—the legendary Argyle mine in the country’s remote northwest—where the output amounts to a mere 40 to 50 gem-quality stones a year. The best of them command $100,000 to more than $1.7 million per carat at auction, sums that are 20 to 50 times the price of comparably sized white diamonds.

But this year, two of the Argyle’s most exceptional pink diamonds will not be on the market: L.J. West, one of the world’s preeminent diamond trading firms, is holding them for one fortunate Robb Report reader and offering them through the jewelry retailer Borsheims. The stones are especially collectible, because the Argyle mine is nearing the end of its production and is expected to be entirely depleted by 2020. While that time span might sound fairly robust, output has already slowed, and the stones being produced today are relatively small, with an average weight of less than one carat. Both of the pink diamonds in this gift are particularly large examples: a 2.5-carat vivid purplish-pink radiant-cut, modified square diamond, and a 2.01-carat vivid princess-cut, modified square diamond.

L.J. West has been bidding on the mine’s best stones in an annual closed auction known as a tender for the last 20 years. The firm has witnessed demand and prices rise to record levels. “People are buying the stones today for investors and private collectors,” says Scott West, whose father, Larry, began trading white diamonds 40 years ago and shifted his focus to the elusive pinks in the early 1990s. To put the rarity of these diamonds into perspective, for every million carats of rough diamonds produced at the mine, a mere one polished carat of pink diamond is deemed suitable for sale in one of these tenders. The allure of pink diamonds is further enhanced by the fact that—unlike other colored diamonds, which derive their tints from trace mineral deposits—the origin of the pink color remains something of a mystery. The leading theory is that intense underground pressure places stress on the atomic structure of the stone and thus imparts the hue.

Such remarkable gems demand to be displayed to their best advantage, and the recipient of this gift will meet with the New York jeweler Kristin Hanson, who will create a custom piece using both stones. Hanson understands the nuances of colored diamonds. She serves on the board of the Natural Colored Diamond Association and is an expert at creating settings that enhance the stones’ natural hues. “My inspiration is drawn from the innate and rare color of Argyle pink diamonds,” says Hanson, who envisions a hand-made piece in platinum and rose gold with pavé diamonds, “to accentuate the rich hues.”