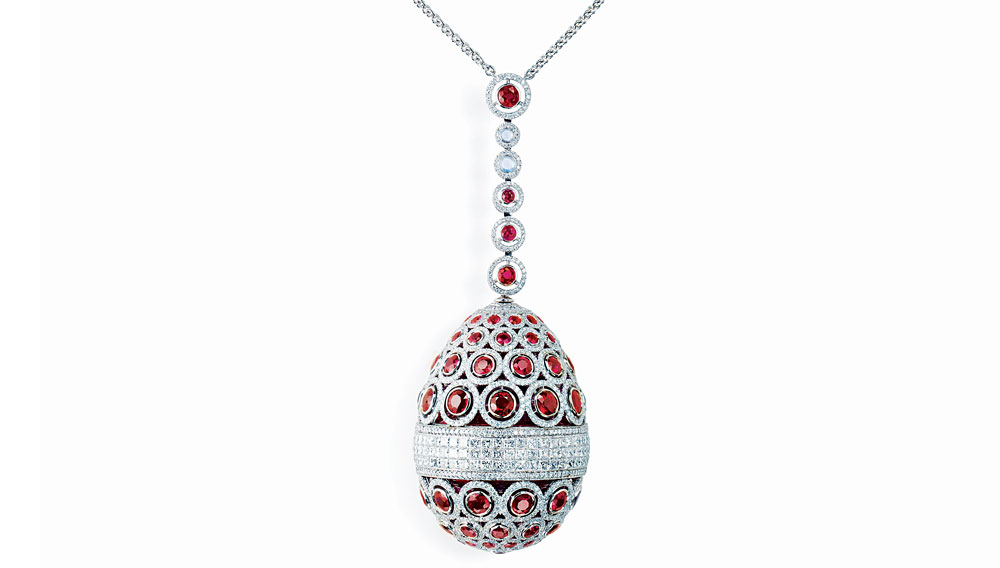 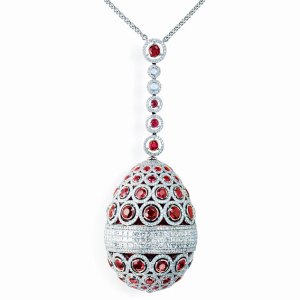 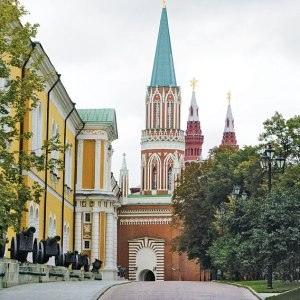 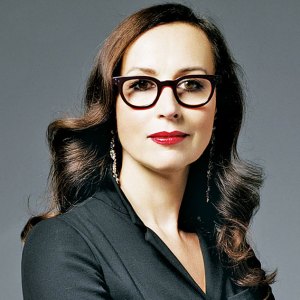 A visit to Moscow with Fabergé creative and managing director Katharina Flohr.

A private tour of the Kremlin’s Fabergé egg collection.

For decades, Peter Carl Fabergé created extravagant jeweled works of art for the Russian royal family—most famously, a series of 50 intricate imperial eggs. Each Fabergé egg was a gift commissioned by a tsar, and each contained some sort of treasure or surprise. The final egg in that series—the Steel Military Egg—was commissioned by Tsar Nicholas II for his wife, Alexandra, in 1916, when World War I was taking a heavy toll on Russia’s military, economy, and citizenry, setting the stage for the revolution that would end his reign the following year. After completing the egg, Fabergé closed his workshop. The Steel Military Egg is set on four artillery shells, and its exterior is austere compared to other eggs’ surfaces. But inside, surrounded by silk and velvet, is a miniature painting by Vassily Zuiev that depicts the tsar and his son, Alexei, at the warfront, in conversation with military leaders. Today, it is one of 10 imperial eggs on display at the Kremlin’s armory in Moscow, where the contrast between the egg’s exterior and its interior, with its hidden artwork, seems to encapsulate an entire moment in history.

This gift allows one Robb Report reader to commission a bespoke Fabergé jeweled egg pendant with its own hidden treasure—and perhaps a veiled message. Last year the jewelry house introduced a series of lavish one-of-a-kind egg pendants inspired by the imperial eggs, but this is the first time it is accepting a commission for a bespoke, high-jewelry egg pendant.

The gift begins with a three-day visit to Moscow with Katharina Flohr, Fabergé’s creative and managing director. The recipient and a guest will fly first-class, stay in a suite at the Park Hyatt Moscow, and dine at Café Pushkin. Accompanied by Flohr, the recipient and guest will take a privately guided tour of the Kremlin’s imperial egg collection and other relics from the Romanov era, including crowns, jewels, and scepters. Once the recipient understands the period in which Fabergé lived and worked, “We will explore the colors, jewels, and designs they love,” says Flohr. “I want to explore all the possibilities with them and then fulfill their dreams.”

Following the trip to Moscow, Flohr will return to Fabergé’s London headquarters and consult with her creative team, who will create a series of sketches for the recipient to review and modify. Next, the recipient will select the gemstones to be included in the design, and then the pendant will be made at an atelier in Paris.

As for the surprise inside the egg, that too will be determined by the gift recipient. “The surprise might be a good-luck charm, an animal figure, or perhaps a wedding band, but it should be something personal,” Flohr says. “[Peter Carl] Fabergé was extremely quirky and had a great sense of humor. We want to re-create that spirit, and there are no limitations to what we can do.”

The pendant will take about six months to complete, depending on the complexity of the design. The recipient will also be given a watercolor gouache painting of the pendant and a leather-bound book detailing the piece’s creation, including the initial sketches and the images of the completed egg. “We want to fulfill someone’s fantasy,” says Flohr, “as Fabergé once did for the tsar.”