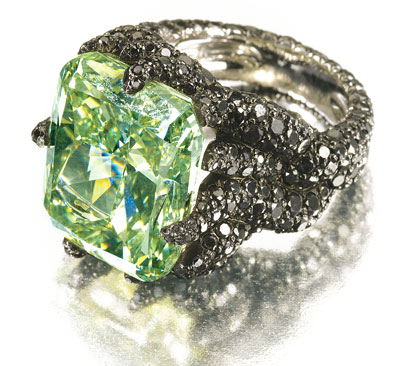 An extremely rare, 25-carat green diamond, one of the largest of its kind.

The cushion-cut stone is set in a gold ring by Swiss jewelry house de Grisogono that features an additional seven carats of black diamonds.

Colored diamonds are rare, and green diamonds are rarer still, but one of this size and of this delicate shade of green comes along once in a lifetime. “Looking at this stone is like looking into the sea,” says Fawaz Gruosi, owner of this 25-carat gem. “It’s an unusual green that is sparkling, alive, and sexy.”

Gruosi, the founder of the Swiss jewelry house de Grisogono, had the diamond cut from a rough, 100-carat stone that he acquired eight years ago from a diamond dealer whom he prefers not to identify. The diamond, which came from South Africa, gained its hue naturally millions of years ago when it was exposed to an unknown source of radiation. Gruosi sacrificed three-quarters of the weight to transform the stone into a nearly flawless, cushion-cut green diamond. He describes the gem as the finest modern specimen of a green diamond, eclipsed only by the 40.70-carat Dresden Green, which dates to at least the early 18th century. (See “Big Green,” below.) Other jewelers might frame a diamond this large and rare in a classical jewelry design, but Gruosi fashioned an unconventional, striking ring in which 382 black diamonds surround the gem. “I tried to make something very expensive not so obvious; nobody expects to see green and black diamonds,” he says.

The diamond has had a low profile while in Gruosi’s possession; he has shown it to fewer than a dozen people in the last eight years. “I’m not anxious to part with this stone,” he says, adding that he may never again own another like it. “I need to find the right person, someone who understands the gemological importance of this diamond. It’s like a piece of rare art that can never be repeated.”

the 40.70-carat Dresden Green is the largest and finest natural green diamond ever discovered. The earliest mention of the stone appears in an obscure 1722 London news sheet article that recounted diamond merchant Marcus Moses’ meeting with King George I. According to the article, the king viewed the gem and was “very much pleased with the sight thereof. It is said there never was seen the like in Europe before, being free from any defect in the world . . . .” However, Moses evidently did not close the deal with the British monarch, because 20 years later, Frederick Augustus II, the king of Saxony, purchased the diamond from the merchant. (The stone takes its name from Dresden, the city that was the capital of Saxony, which is now a region of Germany.)

The impressive stone later became the centerpiece of an agrafe, or hat brim ornament, in 1768. The agrafe remains a highlight of the Green Vault, a collection of treasures that the kings of Saxony accumulated. For years, the stone was exhibited in Dresden’s Albertinum museum because the original display site, the Royal Palace, had been damaged in World War II bombing raids. The diamond was returned to the palace in September of this year following the renovation of the building.