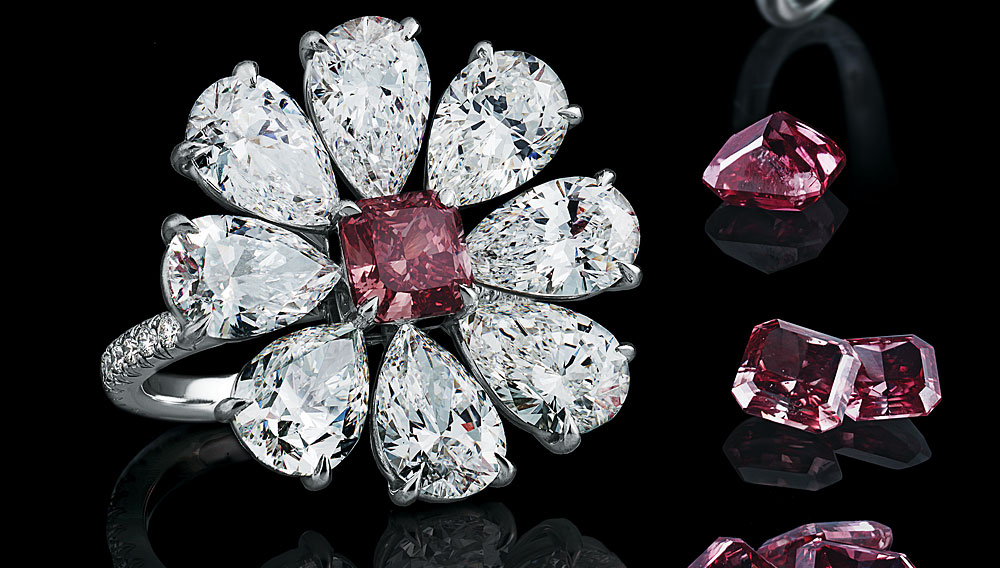 A collection of 13 natural red diamonds—among the rarest gems in the world—and two rings, each featuring one of the red diamonds and almost 15 carats of exceptional-quality white diamonds.

A private consultation with Leviev’s chief jewelry designer, who will travel to meet the client Internationally (or the buyer will be flown round-trip, first-class to one of Leviev’s salons).

Starting at $15 million, depending on the complexity of the jewelry designs.

A single red diamond is an extraordinary discovery. A collection of 13 red diamonds? “Mind-boggling,” says David Klein, executive director of Leviev, the exclusive international diamond house with salons in New York, London, Moscow, Dubai, and Singapore. Over the past eight years, Klein has slowly amassed his cache from mines on four continents, tucking the diamonds away in the company’s safe. Now the jeweler is offering a Robb Report reader this unrivaled collection and the chance to create extraordinary jewelry with the help of Leviev’s chief designer.

Red diamonds, says John King, chief quality officer for the Gemological Institute of America laboratory in New York, are “a very unusual occurrence in nature that remains somewhat of a mystery.” Most diamonds take on a hue when an impurity is present in the stone—boron creates blue, for example, and nitrogen makes yellow. Scientists are uncertain what causes a very few diamonds to be red, though King says that it may be a structural distortion that changes the way the stone absorbs light. Natural red diamonds are elusive and typically fairly small.

The Leviev gems range in size from 0.46 to 1.16 carats and have a total weight of just over 10 carats. They were graded and classified by the Gemological Institute as either pure red or purplish red, and they have a fire like no other stone: What distinguishes red diamonds from rubies or garnets is their inherent sparkle. Found in Angola, Namibia, Australia, and Russia, the Leviev red diamonds were cut in the company’s New York workshop. Master diamond cutters spent weeks to months assessing each stone, then cut 12 of them in a round radiant to “provide the greatest intensity of color saturation,” says Klein. Because of its structure, one red diamond was best enhanced with an emerald cut.

Now all of the gems await the recipient of this gift, who will design original settings and display them to the world for the first time. “People often buy important collectibles as an investment, and they’re hidden away, but these stones are discreet enough to be worn by their owners and enjoyed,” Klein says. Leviev is also offering the recipient the option of resetting the cocktail rings’ red and D-flawless white diamonds in other pieces; or the recipient can simply hold on to the stones until it is time to display this incomparable treasure.

“Since this is such a significant acquisition,” Klein says, “we want the buyer to enjoy the process of creating the jewelry, whether it is one elaborate design with numerous stones or a series of heirloom pieces.”