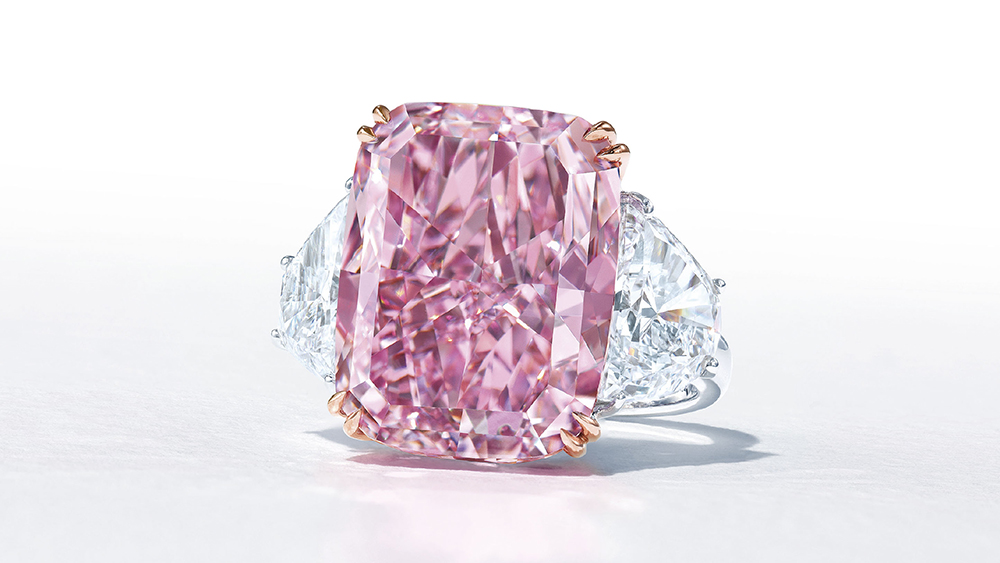 The largest purple-pink flawless diamond to ever appear at auction could realize up to $38 million when it goes under the gavel next week.

The sizable stone, known as the Sakura, takes its name from the Japanese word for cherry blossom on account of its comparable hue. A unique freak of nature, it tips the scale at nearly 16 carats and is set on a platinum ring alongside two gleaming half-moon diamonds. The one-of-a-kind bling will lead Christie’s upcoming Magnificent Jewels auction in Hong Kong on May 23.

In the rarefied world of pink diamonds, large stones are near impossible to find and cut. In fact, Christie’s claims that fewer than 10 percent of pink diamonds weigh more than one-fifth of a carat. The Sakura’s is nearly 80 times that at an unprecedented 15.81 carats. Yep, be prepared for it to weigh down your finger.

If the Sakura reaches $33 million, it will become the most expensive purple-pink diamond to sell at auction.  Christie's

The Sakura is also almost one whole carat heavier than The Spirit of the Rose. This 14.8-carat stone fetched almost $27 million at Sotheby’s last year to become the most expensive purple-pink diamond to sell at auction. Should the Sakura achieve its high estimate of $38 million, it will comfortably eclipse The Spirit of the Rose and take that title.

Aside from its significant size, the Sakura is also coveted for its color and clarity. Graded as internally flawless, the stone’s blemishes can only be spotted under close magnification. Furthermore, it boasts extraordinary optical transparency whereas the majority of pink diamonds are graded slightly included and present hazy.

The Sakura has also been classed as “fancy vivid” due to its strong saturation and intense color. According to Christie’s, only 4 percent of pink diamonds carry this classification. The gem showcases remarkable pink and purple hues that emulate those found within cherry blossoms. In other words, it’s not just big but resplendent, too.

The Sakura will lead Christie’s upcoming Magnificent Jewels auction in Hong Kong on May 23.  Christie's

“This exceptionally rare and magnificent wonder of nature represents a unique expression of identity and mesmerizing beauty through its enthralling purple-pink hue, that will undoubtedly capture the hearts of discerning connoisseurs and collectors worldwide,” Vickie Sek, chairman of jewelry at Christie’s Asia Pacific, said in a statement.

Just like cherry blossoms, which bloom for a very short time at the beginning of spring, the Sakura will be available to collectors only fleetingly. Consider this your official notice.