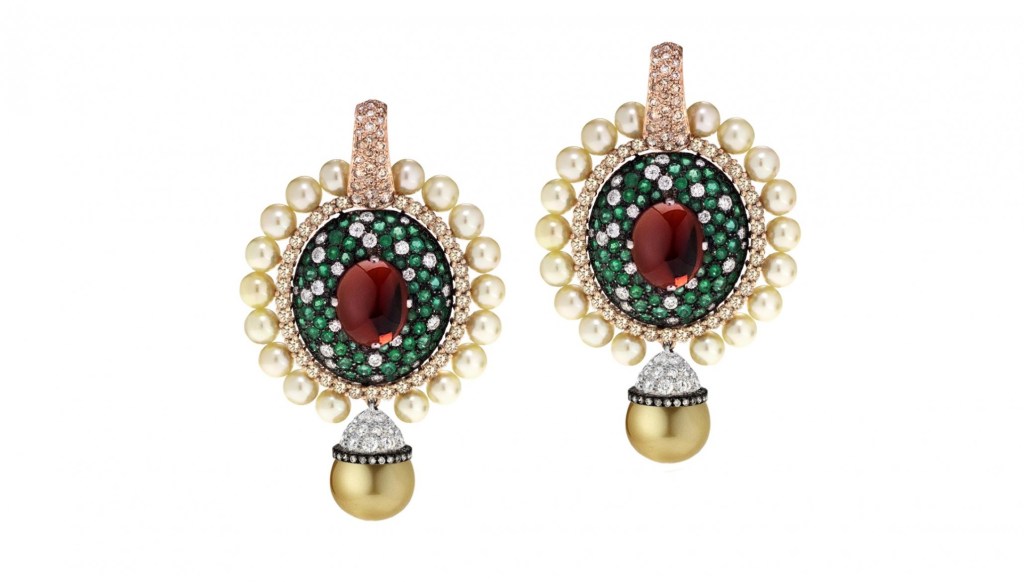 Abellán New York is honored to announce the firm’s hand crafted magnificent jewels are showcased in the exclusive on line Boutique at Moda Operandi.

Abellán New York creates dazzling one-of-a-kind jewelry. The designs for these unique jewels spring from Abellán’s mind and heart influenced by her travels around the world. The Artist designs each piece of art with its own story and by choosing high quality and distinctly special gemstones used in unusual combinations.

The Sultan’s Treasure Ear Pendants, inspired by Abellán’s visit to Topkapi Palace in Istanbul Turkey, are one of the curated objets d’art available at the Boutique on Moda Operandi created by Abellán New York.

The Topkapi Palace an enormous palace complex created by the Ottoman sultans from the 15th-17th centuries, is rife with ornate and exotic architecture as well as priceless objects of precious materials and gemstones. Many colorful stories are attached to this famous structure featuring sultans, courtiers and concubines who lived and worked there when it was the court of the Ottoman Empire.

Today it is a world-famous museum, with a treasury room that contains many objects made of gold and other precious materials, often encrusted with precious stones including the Topkapı Dagger, a golden hilt ornamented with three large emeralds and mounted a golden watch with an emerald lid. Its golden sheath is covered with diamonds and enamel. This dagger gained more fame as the object of the heist depicted in the film Topkapi.

Upon visiting this magnificent repository an Ottoman Empire’s head ornament which bears a large emerald framed by a row of diamonds and pearls, also set with a ruby, took Abellan’s breath away.

After her visit to Topkapi, in particular the Emerald Room of the Treasure section of the palace, she was inspired to create these magnificent ear pendants which blend African diamonds and emeralds as well as pearls of different colors. They evoke the opulence of the Ottoman sultans’ lifestyles in their lush use of stones and their antique forms. These one-of-a-kind drop ear pendants would make any wearer feel like the wife of a sultan.

The jewels feature the use of White and Cognac Diamonds, Emeralds. These stones are paired with exotic Mozambique Garnets, Golden Akoya Pearls and a South Sea Pearl as a signature element of the Artist¹s creation gracefully adding to the appeal of this masterpiece.

Abellán signs each of her original creations, which are crafted in New York City.

Abellán New York is an art jewelry maison, offering one-of-a-kind creations crafted in New York City. Each piece of art is a singular expression of the Artist’s creative spirit, conceived with its own story and source of inspiration. Abellán infuses each piece with sophistication and sensuality. For more information, visit www.abellannewyork.com.