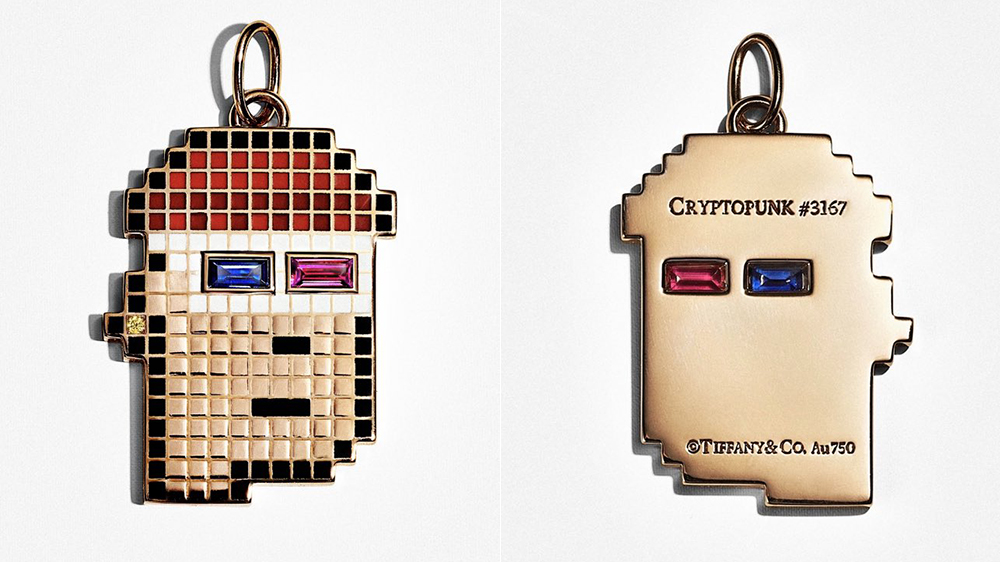 Spend a little time on social media and you’re almost sure to see a profile picture showcasing an NFT instead of a picture of the account’s owner. But one crypto-collector and luxury executive has taken things a step further and turned his NFT into a piece of jewelry.

In a one-off release, Tiffany & Co. has transformed a CryptoPunks NFT (#3167) into a rose gold-and-enamel pedant for its owner, the brand’s vice president Alexandre Arnault. The piece mirrors the CryptoPunk in the 29-year-old’s Twitter profile picture. Its 3-D glasses are rendered with a baguette-cut sapphire and Mozambique ruby, and a yellow diamond takes the place of its earring. Both the Tiffany & Co. name and the NFT’s number are engraved on the reverse.

When punks go wild at @TiffanyAndCo

Alexandre Arnault made headlines in February for making the avatar, titled Punk 3167, his profile picture across social platforms. Just a few days earlier, his father, LVMH CEO Bernard Arnault expressed concerns about venturing into the metaverse “bubble.” As the company’s majority shareholder since 1989, the elder Arnault knows a thing or two about investing in new platforms and marketplaces. “It can undoubtedly have a positive impact—if it is well done—on the activity of the brands, but it is not our objective to sell virtual sneakers at €10,” the tycoon told Vogue Business. “We are not interested in that.”

However, in the past year, a number of the French conglomerate’s brands have entered the metaverse. Louis Vuitton, for example, launched “Louis the Game” last August in which players could collect NFTs in celebration of the brand’s 200th birthday. Dior’s clients can create and customize avatars in Ready Player Me, a platform that connects to over 300 games and applications. And it’s clear that Alexandre is interested in what the space has to offer. Vogue Business reports that his Punk 3167 NFT was purchased for ETH 160, which is about $416,000.

Whether or not we can expect to see a collection of Tiffany & Co. NFTs anytime soon is the real question here. Guess we’ll just have to wait and see.