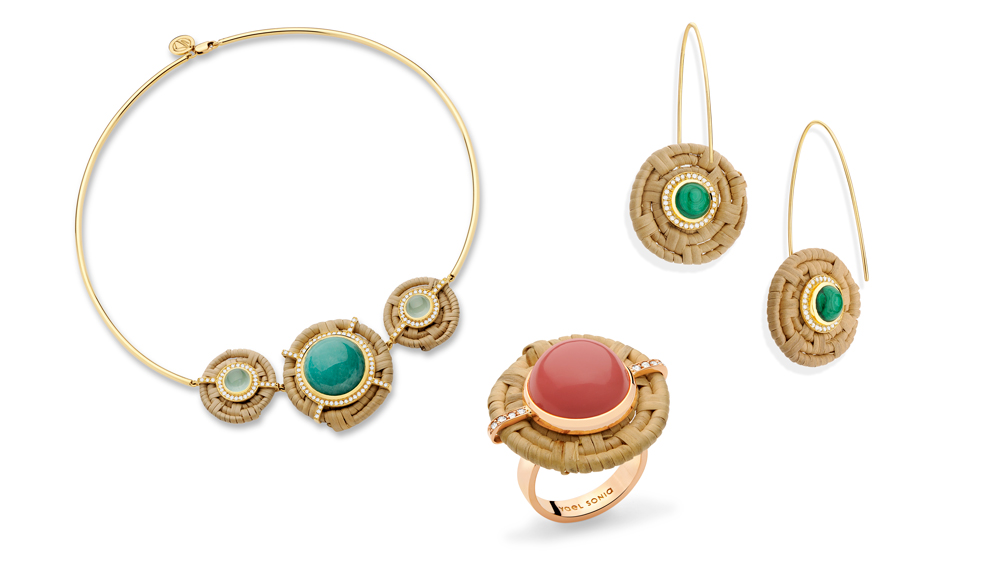 Growing up in New York, Paris, and São Paulo, jewelry designer Yael Sonia was introduced to a tapestry of dynamic cultures and contemporary art, each of which influenced her kinetic designs. Her time in Brazil proved especially formative; it was there that she discovered the beauty of gemstones, established her eponymous brand in 1998, and worked with Brazilian stonecutters and goldsmiths to develop new stonecutting and metalworking techniques.

This fall, Sonia is going back to her roots by partnering with Casa do Rio Tupana (an organization that works to create sustainability in the Amazon and women’s equality in Brazil) on a limited-edition capsule collection called Yael Sonia x Teçume.

Created in conjunction with craftswomen from the Amazon who have been trained by Teçume (a female-focused social brand run by Casa do Rio Tupana), each piece displays indigenous Amazonian straw-weaving techniques. “The technique is a traditional coil-basket-weaving technique where an inner core is coiled and then is wrapped with an outer coil of vine stripped to a thin, straw-like strip,” says Sonia. “The women made the woven portions of each piece in the collection, which I then used in creating the pieces.”

The six-piece collection is made up of a necklace, rings, and earrings. Sonia paired gold silhouettes with aquamarine, guava quartz, amazonite, malachite, and diamonds for a colorful, sophisticated end result. “The colors of the Amazon, the reflections of the trees, sky, and sunset in the water were so inspiring to me and really helped in the development of the color palette used in this collection,” she says.

The collection ($2,700–$12,000) will be available exclusively at Yael Sonia’s New York and São Paulo showrooms beginning in September and October, respectively. All of the proceeds from the collection will go toward Casa do Rio Tupana’s mission of empowering and aiding the women of the Careiro region.