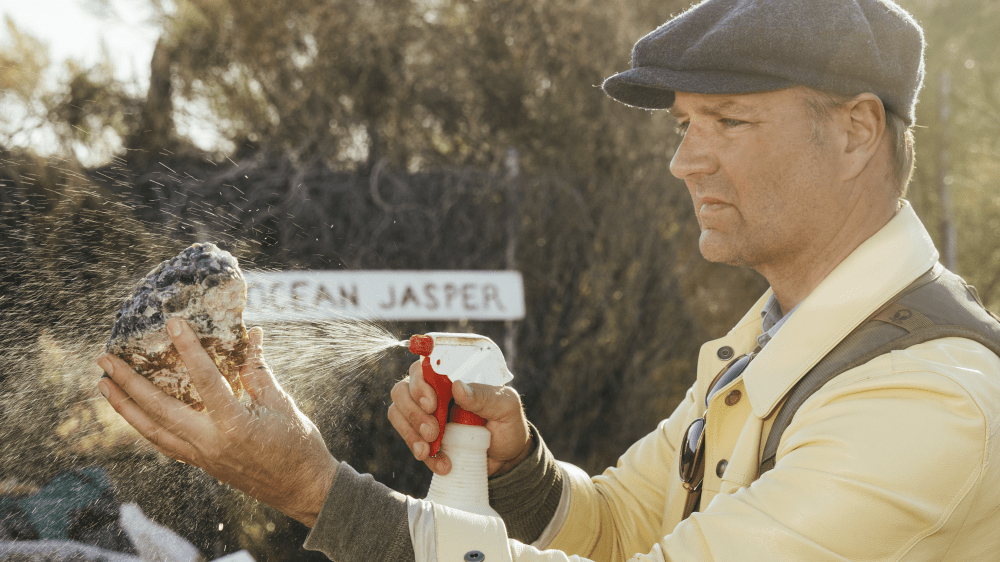 Walking down the hallway of a dingy roadside motel in Tucson, the scent of patchouli and incense wafting through the air, I catch a glimpse inside a guest room. There, a middle-aged man is handing over a small white envelope, neatly folded to protect its contents, in exchange for a wad of cash. It isn’t drugs but something just as mesmerizing: an exceptionally rare, 8-carat padparadscha sapphire. Welcome to the Tucson Gem and Mineral Show.

Here, in this desert town, thousands of gemstone miners, dealers and designers from across the globe make the pilgrimage every January and February, like the pioneers before them, to sift through rocks and hunt for treasure. “It’s got that nefarious cowboy mentality that this whole area was once known for,” says New York designer Nicholas Varney, who has been attending the show for 25 years. Indeed, in the middle of our breakfast at the Hotel Congress, where John Dillinger was captured in 1934, an unassuming blonde woman enters the restaurant wearing a pink pashmina scarf around her neck and a Glock 19 pistol on her hip. Is it protection for whatever dazzling gems she has hidden away? Or is she just a local, out for her morning joe?

The Tucson Gem and Mineral Show began in 1955 as a platform for local miners to sell their inventories. Over the past 60-plus years it has evolved into the world’s most prolific gem trade fair, which not only takes over the local convention center but sprawls out across the sleepy city. While getting a booth at a more formal trade fair is prohibitively expensive for most miners, Tucson is democratic: Book a motel room, lay out your goods, and you’re in business. As a result, it offers an unparalleled diversity of material and direct access to the people who dug these things out of the ground in Ethiopia, Thailand, Colombia, Madagascar and beyond. It’s like a shoppable Smithsonian with cut and polished gems, oil barrels of rough stones, fossils, meteorites, opals, pearls and on and on. Its reputation as a prolific source for hard-to-find stones has spread, and today it draws buyers from the likes of Cartier and Bulgari, as well as free spirits looking to stock up on chakra-balancing crystals. Like Burning Man for rock hounds, everyone is united by the currency of gems.

“You can be looking at a $1.4 million Vietnamese spinel next to a brontosaurus bone,” says Stephen Webster, a London-based designer who’s been coming to Tucson since 1983. It’s such unexpected discoveries that push designers like Webster to take chances and color outside the lines. Over the course of a few days trailing designers to see how they shop and sort through this vast array of stones, I spotted Coomi Bhasin, of Coomi, lusting after a 226-carat blue tourmaline, and Sylva Yepremian, of Sylva & Cie, scouring for gem-quality pieces of agatized dinosaur bone—vastly different materials that, in the right hands, will yield equally covetable jewels. It’s an exercise in creativity, with inspiration and ideas striking in real time.

But those heady creations are worlds away from Tucson. This is ground zero for jewelers. More than carat weight or clarity, provenance or pedigree, Tucson is for hunting unexpected treasures like a rare color-changing alexandrite. It’s the promise of that next big score that keeps luring the gem-crazed back to this Western town, throwing caution to the desert winds, and into another motel room.