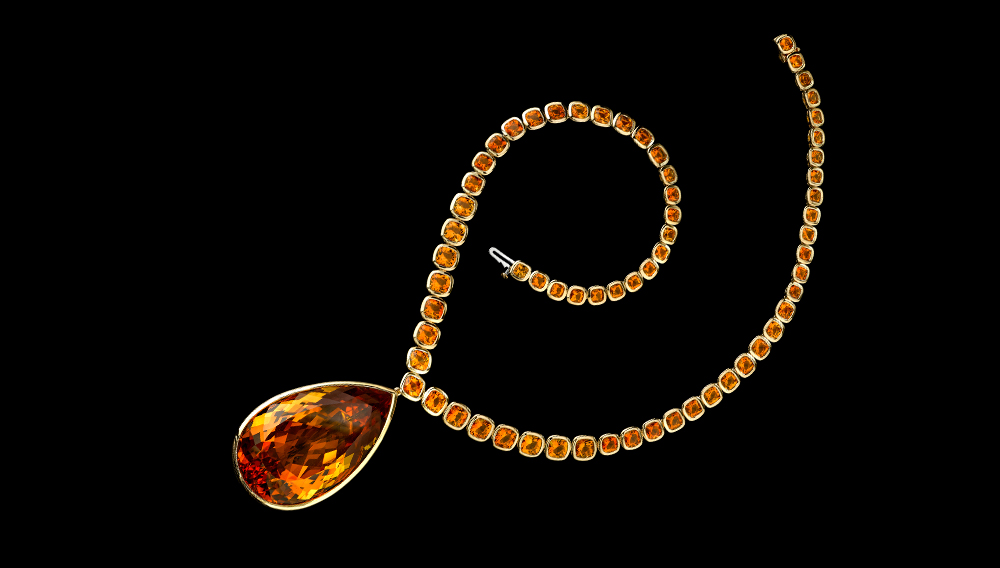 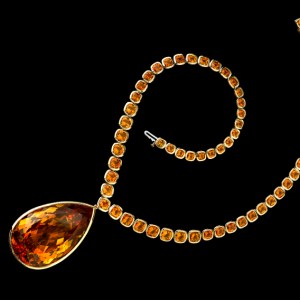 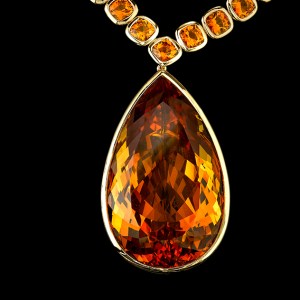 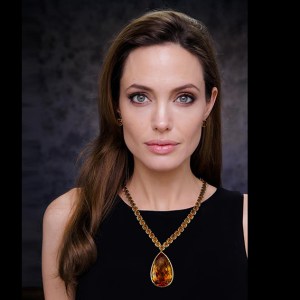 Film actress and humanitarian Angelina Jolie Pitt has made a gift of an extraordinary citrine necklace to the Smithsonian’s National Gem Collection. The piece is from the Style of Jolie jewelry collection, a collaboration between Jolie Pitt and distinguished American jewelry designer, Robert Procop. The 18-karat yellow gold necklace features 64 graduated bezel-set cushion cut citrine gems highlighted by a 177.11-carat pear-shaped citrine drop. The new piece, named the Jolie Citrine Necklace, will be displayed in the Janet Annenberg Hall of Geology, Gems and Minerals Dec. 11 and remain on view indefinitely.

The Jolie Citrine Necklace is a spectacular addition to the National Gem Collection. “We are thrilled to receive this important piece for the Smithsonian,” said Jeffrey Post, curator of the National Gem Collection. “It is the first piece of citrine jewelry in the collection. The fact that it was personally designed by Angelina Jolie Pitt and Robert Procop makes it all the more significant.”

“Robert and I are honored to have this great institution feature one of our jeweled creations,” said Jolie Pitt. “As the Smithsonian has educated so many of us, this jewel is a symbol of our efforts to help educate underprivileged children in conflict areas of the world.”

Renowned for the display of rare pieces such as the Hope Diamond, the National Gem Collection in the Janet Annenberg Hall of Geology, Gems and Minerals is one of the most visited exhibitions at the Smithsonian. The mineral and gem collection consists of approximately 350,000 mineral specimens and 10,000 gems, making it one of the largest of its kind in the world. It is used for scientific research, education programs, and public exhibitions. Every year hundreds of specimens are loaned to scientists around the world for research in geology, materials science, health, chemistry, physics and other fields.

“I am honored and also humbled to have our citrine necklace placed among the great jewels of the permanent collection of the Smithsonian Institution,” said Procop. “From one endeavor, Angelina’s creative vision draws two equally impressive outcomes: to transform the finest gems into works of art, and ultimately, improve the lives of many that are in need.”

Citrine isa unique variety of quartz. One of the most abundant minerals in the Earth’s crust, quartz is composed of the elements silicon and oxygen. In its pure state it is colorless and known as rock crystal quartz. However, small amounts of various impurity atoms can yield a wide range of colors. Citrine is the golden-yellow to orange variety of quartz, colored by traces of iron. The name comes from the French citron, meaning “lemon,” in reference to its color.

The Smithsonian’s National Museum of Natural History is the most visited natural history museum in the world. Opened in 1910, the museum is dedicated to maintaining and preserving the world’s most extensive collection of natural history specimens and human artifacts. The museum is located on the National Mall at 10th Street and Constitution Avenue N.W., Washington, D.C. and is open every day except Dec. 25 from 10 a.m. to 5:30 p.m. Learn more at www.mnh.si.eduor.