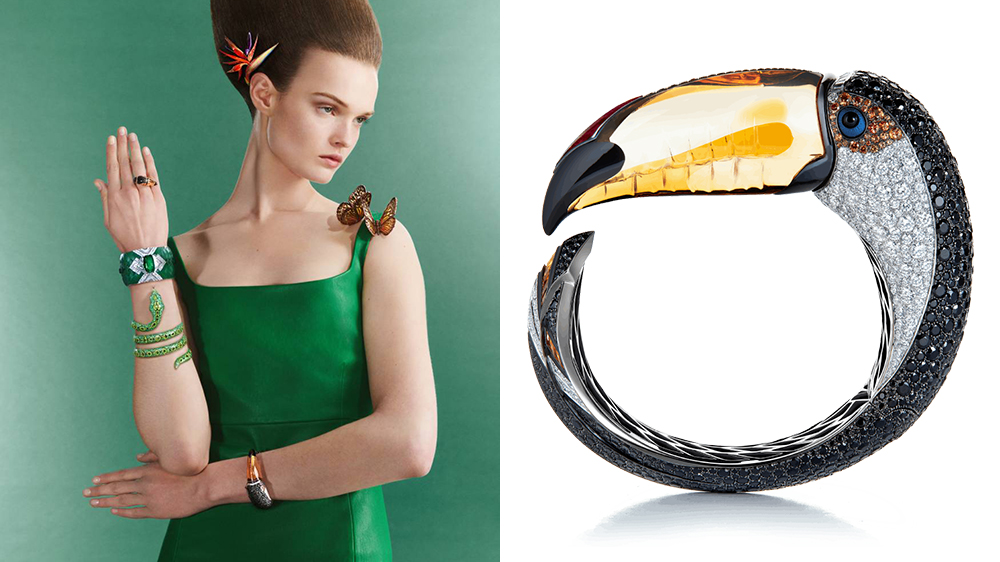 In January 2021, when guest curator Marion Fasel learned that her forthcoming “Beautiful Creatures” exhibition of animal-themed jewelry, due to open at the American Museum of Natural History in New York, was facing yet another pandemic-induced postponement, she found herself in a one-sided conversation with the jewels.

“It was the third time the exhibition was delayed,” the author and jewelry historian tells Robb Report. “We had a lot of jewelry and I was in the safe room with the registrar and I started saying, ‘You all look great. We have a delay. But you’re all together and you’re going to love each other.’

“And the registrar said, ‘Excuse me, did you say something?’” Fasel adds. “I was just talking to the jewelry. Did I ever talk to jewelry before? No, I’ve never talked to my bracelets. I think it’s because when animal jewelry is done beautifully, there’s so much personality to it. And they all have faces.”

Fasel was not the first person to be charmed by a menagerie of bejeweled animals, and she certainly won’t be the last. Although the category has been around for as long as jewelry itself, some years see more animal-themed jewels than others. This year happens to be one of them.

At 1stDibs, the online luxury collectibles marketplace, sales of animal-themed jewelry grew by a whopping 300 percent from June 2021 to May 2022 vs. the same period the prior year, says Anthony Barzilay Freund, the site’s editorial director and director of fine art.

The pandemic, Fasel suspects, has played a key role in our ramped-up fascination with jewels that place animals—winged, webbed, feline, lupine, ursine or serpentine—on gem-set pedestals.

“We’ve been on a years-long upward swing of people looking for talismans in jewelry that are a little bit literal, from the love of birthstones to the horoscope symbols to lucky charms of whatever stripe to the animals,” she says.

There’s also the undeniable fact that “animal jewelry is fun,” says Barzilay Freund. “It’s lighthearted and celebratory, and we’re in a moment where people are traveling and throwing parties and getting dressed up again. Animal jewelry feels just right for this moment.”

The proliferation of zodiac jewelry, not to mention the enduring fascination with iconic vintage animal jewels — panthers at Cartier, serpents at Bulgari and butterflies at Van Cleef & Arpels, for example—has also added to the vast array of gem-set beasts in our midst.

“There is a rich tradition of animal jewelry among major jewelry houses, from Cartier to Van Cleef & Arpels, to modern masters like David Webb and JAR,” Barzilay Freund says. “Elizabeth Taylor famously wore a Bulgari Serpenti bracelet on the set of Cleopatra in 1962 and, more recently, Odell Beckham Jr. wore a Jean Schlumberger Bird on Rock brooch walking into the stadium before playing in the Super Bowl this year (though not, of course, on the field).”

While jewelers have immortalized living things as quirky as the mandrill, the jellyfish and the magpie, Fasel, whose Beautiful Creatures exhibition finally opened in June 2021 for a spectacular three-month run, noted some recurring themes in the animal jewelry oeuvre.

“The two animals that are the most constant in the history of jewelry are butterflies and snakes,” Fasel says. “And butterflies really surge in popularity when there is a desire for freedom, rebirth and transformation. And today there are butterflies galore.”

Below, we offer a sampling of our favorite new animal-inspired designs. Go wild!

During the Couture shows in Paris earlier this month, the French maison presented the “Ailleurs” collection, whose name translates to “elsewhere” in English. In order to execute her vision of a mythical “elsewhere,” where nature exists in a raw, Platonic state, creative director Claire Choisne incorporated a mix of precious and technological materials to create a motley crew of animals—including a toucan, a wolf, a gazelle, a magpie and a magnificent pair of butterfly jewels made with specially treated Lideopsis Vulgaris butterfly wings—that “celebrate the poetry of nature,” according to Boucheron.

The Gazelle ring features a 2.15-carat diamond on the creature’s forehead, baguette-cut diamonds on its majestic horns, and onyx eyes. The butterfly single earring features a pear-shaped diamond that surrounds the earlobe. And the Toucan bracelet features onyx eyes, three blocks of citrine (used to sculpt the beak) and blue titanium on a background of white diamonds and black spinels. Prices on request, Boucheron.com

In creating her Slow Collection, designer Brent Neal Winston wanted to capture the notion that good things take time. The large Snail pendant, seen here in 18k yellow gold with carved carnelian and multicolored sapphires, was the perfect way to convey the message “that it’s okay to take your time,” says Winston. “Eventually you will get there.” $6,450, Brentneale.com

One of the earliest known Zodiacs, depicted in the Osiris chapel in Egypt, inspired designer Darius Khonsary to add a Dendera scorpion ring set with antique diamonds to her collection of 18k gold jewels, most of which pay homage to the myths of her Persian ancestry. $24,000, Dariusjewels.com

During the 1960s and ’70s, designer David Webb parlayed his fascination with animals—he collected children’s books about wild beasts—into the tactile equivalent of a bestiary populated by leopards, zebras, frogs and more. In this 18k yellow gold Taurus cuff bracelet from 1979, the earthy bull gets its glamorous due. $37,620, 1stDibs.com

At the recent Couture jewelry show in Las Vegas, Lauren Harwell Godfrey debuted Menagerie, a capsule collection of one-of-a-kind animal jewels inspired by her visit to the Beautiful Creatures exhibition. “I applied my design language to animals,” says Harwell Godfrey, whose owl cuff, in 18k yellow gold with white diamonds, black diamonds and colored sapphires, is meant to represent wisdom and vision. Price on request, Harwellgodfrey.com

The British designer has a special love for animals who live in the deep, having long featured crabs, puffer fish and other ocean-dwelling beings in his work. From Webster’s No Regrets collection, a celebration of his most elaborate and expressive designs, comes this Stingray brooch in grey titanium and 18k white gold set with grey spinels, white diamonds, and a tsavorite eye. $35,000, Stephenwebster.com