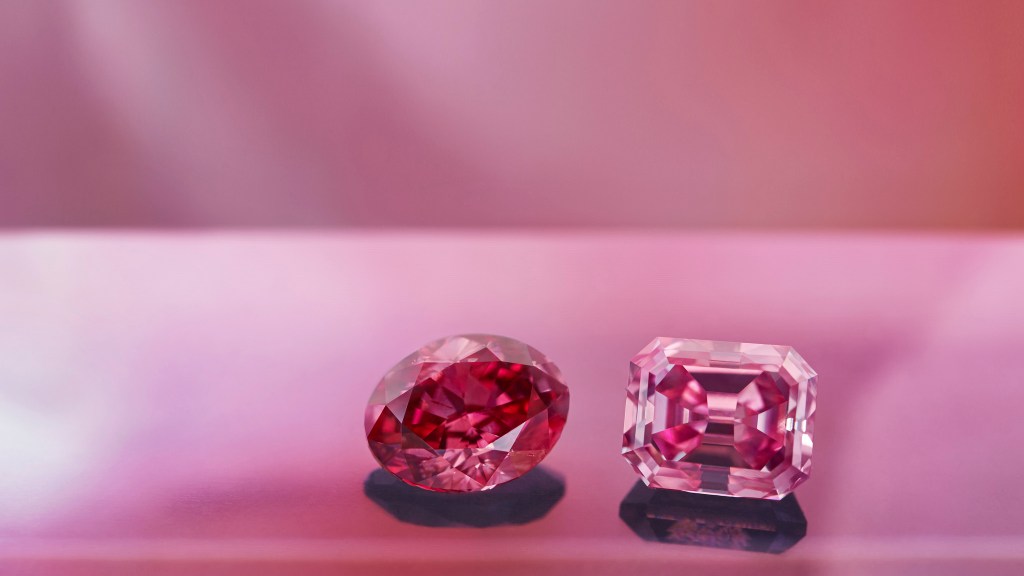 This week in Sydney, the London-based mining company Rio Tinto unveiled the largest vivid pink diamond on record. The gem is part of the company’s 2018 Argyle Pink Diamonds Tender, which is composed of 63 diamonds that, in total, weigh in at more than 51 carats. The tender is an annual sale of the finest pink, purple, red, and violet diamonds found at the Argyle mine in Western Australia. The mine has nearly depleted its supply of colored diamonds and is slated to close by the end of 2021—making these examples all the more precious.

Over the next several months, the gems will be shown around the globe to a select group of elite buyers (typically large jewelry design houses, diamantaires, and collectors) and will eventually be sold to the highest bidder. Other standout diamonds in this year’s tender include five fancy red diamonds, two purplish red diamonds, and three violet diamonds.

The record-breaking vivid pink is called the Argyle Alpha. It clocks in at 3.14 carats, and is fashioned in an emerald cut. Interest in rare pink diamonds has stayed strong in recent years, and if the latest sales of pink diamonds are any indication, the Alpha promises to grab a stunning final price. Last year, Sotheby’s sold the 59-carat Pink Star diamond for $72.1 million, the highest price ever paid for a diamond or jewel at auction. Months later, Sotheby’s dropped the hammer for a 33.63-carat fancy light pink diamond for $12.8 million, setting a new world record for a fancy light pink diamond sold at auction—calculating out to about $2.6 million per carat. And last November, Christie’s sold a 14.93-carat Fancy Vivid VVS1 pink diamond (dubbed the Pink Promise) for $31,861,000—approximately $2.13 million per carat.

The Alpha is accompanied by the Argyle Muse, a 2.28-carat polished oval diamond, which is the largest purplish red diamond ever offered at tender. It was cut from a massive 7.39-carat rough that also produced a second purplish red diamond for Rio Tinto’s 2018 collection. Experts believe that there are fewer than 20 purplish-red diamonds over two carats known on earth, boosting the potential price for the Muse into the double-digit millions.

“I am delighted to unveil this stunning Argyle Alpha diamond, the largest Vivid Pink diamond presented since the Argyle Pink Diamonds Tender began in 1984,” said Rio Tinto chief executive Jean-Sébastien Jacques in a statement. “Rio Tinto’s Argyle mine is the world’s only source of these highly coveted pink, red, and violet diamonds, and we expect considerable interest in this year’s collection. The combination of strong demand and extremely limited world supply continues to support significant value appreciation for Argyle pink diamonds.”

After leaving Sydney, Rio Tinto’s assemblage will be shown in Hong Kong and New York. Bids for the diamonds will close on October 10, and winners will be notified shortly thereafter.