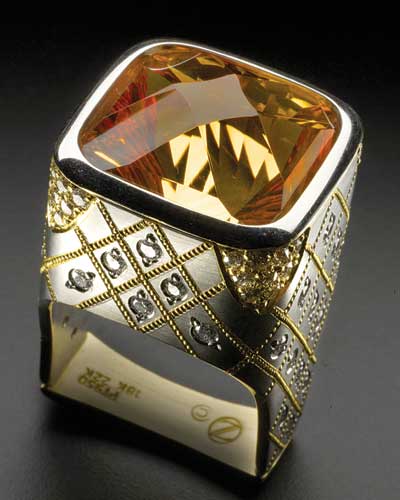 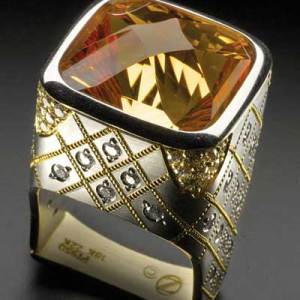 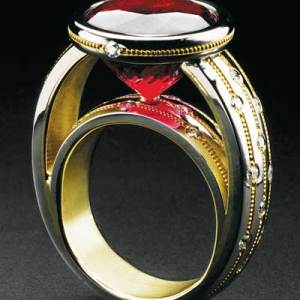 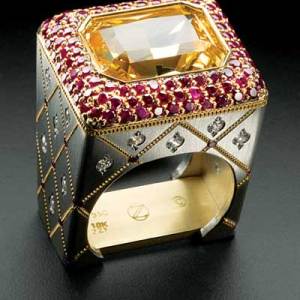 Zoltan David frequently offers a piece of advice to his clients: “If you want the best from an artist, set him free.” For the 53-year-old metalsmith, freedom means spending as many as 70 hours hand-forging one ring rather than casting his designs in multiples. David’s specialty is the laborious “cold-forged” technique that involves using hand tools to compress and shape cold metal, which is then softened with heat and allowed to harden. The heating and cooling process is repeated numerous times, which, he says, results in metal that is 40 percent harder and denser than cast metal. “Hand-forged metal is weighty, tactile, and features a subtle grain that can’t be achieved with casting,” explains David, whose worn hands bear testimony to the grueling nature of the work.

David’s signature design is a finely detailed inlaid pattern typically set with tiny diamonds, rubies, or emeralds. He spent more than two years refining this technique, for which he was awarded a U.S. patent last year.

After launching his career in Vancouver, where for eight years he served as an apprentice to a goldsmith, David spent several years designing for retailers and private clients before opening his Zoltan David Jewelry Gallery in Austin, Texas, in 1994.

“I tend to have a sophisticated collector who is not concerned with fashion or trends, but likes my designs for their engineering, unique style, and feel,” he explains. One Southern California client, for example, called David two years ago and said, “I’m in the mood for something green; make me something cool.” A few months later, David presented her with a ring set with a 12-carat green tourmaline suspended above an inner circle, a design that has since become a favorite in his collection. Says David of the client’s request and the ring that resulted from it: “She set me free.”