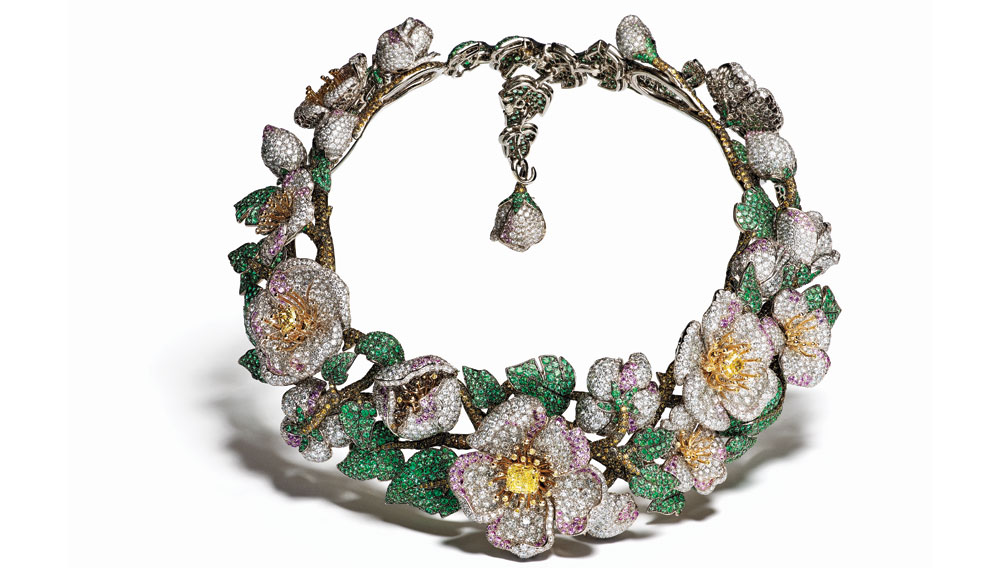 Bodino’s fondness for colored gemstones is expressed in the Primavera necklace with sapphires, emeralds, and diamonds.
View Gallery — 7   Photos 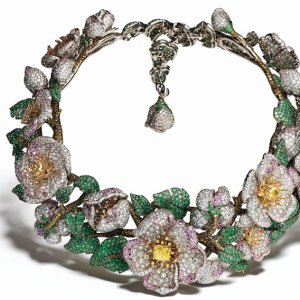 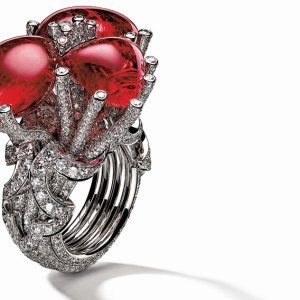 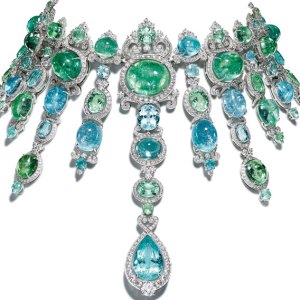 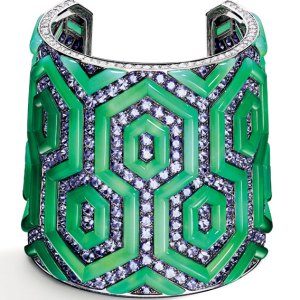 Giampiero Bodino’s daring jewelry is quite at home in Milan’s Villa Mozart.

Beyond Villa Mozart’s imposing wrought-iron gates, a path leads through a verdant garden to the elegantly fanned front steps of the historic residence. With its classical lines and lush setting, this Milanese landmark, which the renowned architect Piero Portaluppi designed in the 1930s, now serves as a fitting home for Giampiero Bodino’s remarkable jewelry. The dwelling’s recently restored floral-frescoed ceilings, marble columns, and sculptures by Eugenio Baroni and Antonio Maraini make perfect complements to Bodino’s masterfully bold designs, which are rich in references to Italian culture and heritage.

This unusual venue reflects the designer’s vision of contemporary luxury: His jewelry must be one-of-a-kind, personal, and not accessible to everyone. Toward this end, he sees his existing and potential clients only by appointment at the villa, where he can renew personal relationships and forge new ones with those seeking to purchase one of his creations or commission a bespoke piece. “This environment is essential, because when you buy something this special, you don’t just buy the object; you also buy the memory of a place and an experience,” says the artist, who enhances such memories by displaying his large-scale figurative paintings, some of which were recently the subject of an exhibition at the Fabbrica Eos gallery in Milan.

Although he began his career in Turin working for the renowned automobile designer Giorgetto Giugiaro, Bodino has since helped to shape the aesthetics of such brands as Bulgari, Van Cleef & Arpels, Piaget, and Cartier. During the past decade, he served as the artistic director for Richemont’s portfolio of jewelry and watch companies, but he has only recently introduced the first collection to bear his own name. His champion in this endeavor was the Richemont Group’s chairman, Johann Rupert, a longtime admirer of Bodino’s talent, who not only strongly encouraged the designer to develop his own collection but also helped finance the project.

Bodino’s experience working with historic jewelry houses informs the style of his pieces, which he says have “a lot of energy and spirit.” The designs are large and arrestingly bold in color yet remain comfortable to wear thanks to Bodino’s technical skill. A wide pink-sapphire-and-spinel choker, for instance, is malleable in its construction and drapes gracefully on the wearer’s neck. “I like a lot of different things in art and design, not just one style,” says Bodino. His diverse collection includes signed 19th-century carved cameos set in outsize diamond rings and necklaces as well as a pair of huge mosaic cuffs decorated with matte-green chrysoprases, violet sapphires, and diamonds arranged in intricate patterns.

“Everyone is obsessed with what’s new, but new is an empty word,” Bodino says. “I’m playing with classical elements and making them contemporary. It is easy to do something different, but it still has to be classical and wearable.”

His tenure at Richemont has enabled the designer to gain exclusive access not only to exceptional stones but also to specialized artisans in Paris and Geneva, whose capabilities allow him to experiment with new design and production concepts and, as he notes, to render his own dreams rather than adhere to the dictates of a particular brand. He finds the design process at once liberating and exciting, but his personal connection to his clients remains his greatest reward. “Seeing the look of satisfaction on their faces when they put on a piece of jewelry,” Bodino says, “is fantastic”—which explains why this privilege is extended only to those who make an appointment at Villa Mozart.