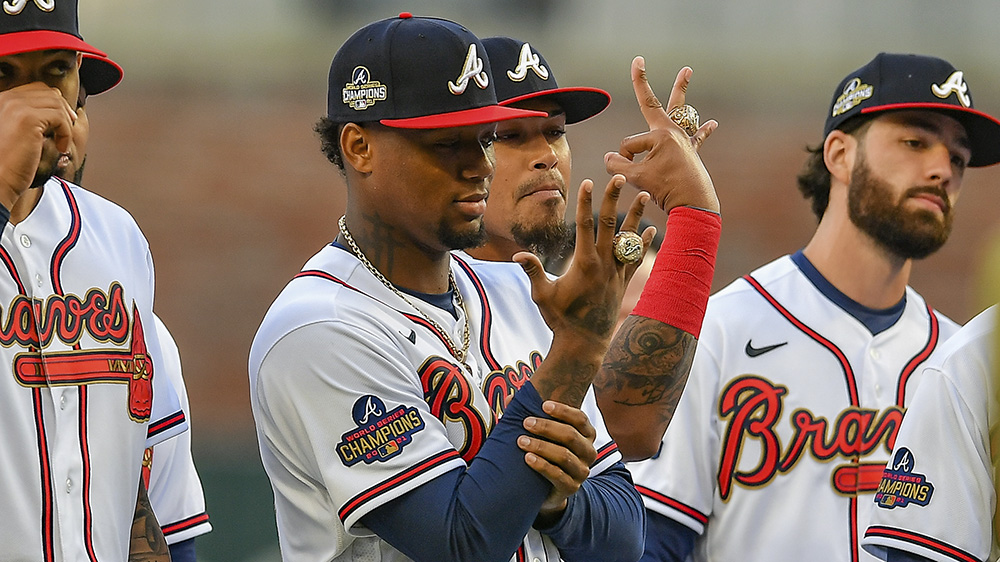 Baseball isn’t about to let the NBA and NFL steal all the championship jewelry glory.

The Atlanta Braves received their 2021 World Series rings on Saturday night before the third game of their opening weekend series against the Cincinnati Reds. And, as with the best championship baubles, the details are what make this piece of jewelry shine: The ring showcases loads of diamonds, a genuine pearl and a miniature recreation of the team’s stadium with working lights. And that’s just for starters.

Although Atlanta is one of the more successful Major League franchises of the last few decades, the Braves know exactly how hard it is to win the World Series. Last year’s triumph was only the fourth title since the club was founded in 1871 and its first since 1999 (their only championship of the decade despite making five trips to the Fall Classic). Because of that the team and official ring partner Jostens made a point to design a celebratory token that is equally rare.

The ring is made from 14-karat yellow gold and is encrusted with 755 diamonds, one for each homerun club legend Hank Aaron, who died last year, hit during his Hall of Fame career. The top of the ring features the club’s logo in 18.71-karat white gold, to signify its inception, and 150 diamonds to represent its age as of last season. There are also four custom-cut rubies that make up the team’s trademark Tomahawk, as well as four princess-cut rubies to represent each of its World Series titles and a genuine white pearl, honoring mid-season addition Joc Pederson and his pearl necklace. Additionally, the rings all feature last season’s “For the A” slogan and are engraved with “7.30.21” to mark the trade deadline, when several key players, including Pederson, were added. They also showcase the series results from each round of the playoffs (3-1, 4-2 and 4-2) and each individual player’s signature.

The biggest highlight, though, isn’t immediately visible. That’s because you have to flip up the ring’s top to find a miniature recreation of the club’s homefield, Truist Park. The tiny stadium’s outfield has 11 round rubies marking where each Braves homerun during the World Series landed. Two micro LEDs, meanwhile, illuminate the park every time you open up the ring. Chris Poitras, Jostens’s vice president, told The Atlanta Journal-Constitution he is unaware of any championship ring featuring lights. He should know, too—Jostens has designed 19 of the last 20 World Series rings.

Braves Country, we are proud to introduce you to…

“It’s an engineering marvel,” he told the paper.

As per usual, it’s unclear how much the Braves’s championship rings cost. But we do know that the club commissioned 1,000 of them, one for each full-time employee. We imagine no Braves employee lucky enough to wear one will forget this title anytime soon.