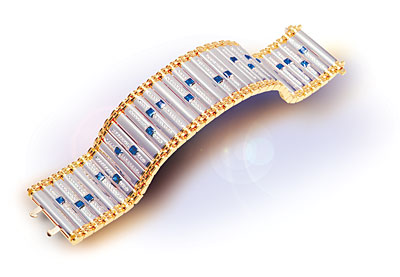 The jewelry designers featured in this issue’s “Artful Hands” story—Michael Zobel, Scott Gauthier, and Zoltan David—are masters of their craft, possessing superior metalworking skills and enough patience to spend years gathering rare and beautiful gemstones. Two longtime leaders in the field, Henry Dunay and Michael Bondanza, who were profiled in “Designers Extraordinaire” in our November 1996 issue, built and have sustained their reputations, in part, on these same fundamental traits. Like the trio of artisan jewelers in this issue, both continue to create limited numbers of high-quality artistic pieces, shunning mass-market production and fleeting fashion trends.

Moonstones have captured Dunay’s attention of late (see “Moonstruck”), but before that, he had fallen under the spell of coral. His interest in gemstones and precious natural materials derives from a desire to add color to his pieces and to give his clients what they want before they realize that they want it. “Finding something new is key,” Dunay says. “Always give them something else to look at, want, and eventually buy.”

More than just the centerpieces of his jewelry, the stones have a rejuvenating quality for Dunay; they rekindle his creative spark. “After Christmas, I go to Europe to see the stone and diamond dealers and visit Paris,” he says. “When I’m in Europe, I’m so blasé and burned out because of Christmas. By the time I’m on the plane home, I’m on fire again, because I’ve found [intriguing] stones. When I see them, I know what to do.”

Bondanza remains motivated by the challenges of constructing the designs he envisions. He expressed interest in math and art when he was younger, and, ultimately, he discovered that jewelry-making satisfied his craving for projects that provide strenuous mental workouts. That others are eager to pay handsomely for the products of his intellectual exercises is a bonus. “I don’t really have a particular customer in mind,” says Bondanza. “I pretty much draw what I like, and if I like it, others will like it.”

His problem-solving inclinations predisposed Bondanza to working with platinum, a tricky and unforgiving metal. “When I looked at the history of jewelry, the most incredible pieces were made from platinum,” he says. “But when I started 30 years ago, few people were making big pieces in platinum. I had to learn to do it myself.”

Bondanza’s trial and error proved costly—he estimates that he ruined tens of thousands of dollars’ worth of metal—but his persistence eventually yielded dividends. His pieces were distinctive and instantly recognizable, qualities that helped establish him in his field. However, he has no interest in trading on that fame by producing on a large scale.

Nor does Dunay, who demonstrated his aversion to the mass market last year when he opened Gallerie Dunay, a salon in Midtown Manhattan where he displays his latest jewelry items and objets d’art and meets privately with clients. The space is convenient to his workshop, which is located in the same building, on the same floor. “Gallerie Dunay gives me an opportunity to sit and talk to the customer at a level that I enjoy,” he says. “Standing in a store behind a showcase puts a barrier between the customer and me. [The salon] allows me to take lunch and drinks with them. Some of them say [visiting me in Gallerie Dunay] is like coming to Henry Dunay’s candy store.”

Bondanza does not seek the intimacy with clients that a private salon provides, but like Dunay, he has given thought to the less pleasant realities of the marketplace. In his case, the solution has been acceptance. Bondanza recognizes that the sales of conventional items, such as wedding rings, allow him to create the limited edition platinum pieces that provide him with the greatest satisfaction but not the greatest profit margins. “I have to do what I want to do,” Bondanza says. “When I see a design on the drawing board, I want to see it finished. That’s the fun of it. Hopefully, people will like it, and I can be proud of it. And occasionally, I can make one or two things that are extraordinary.”