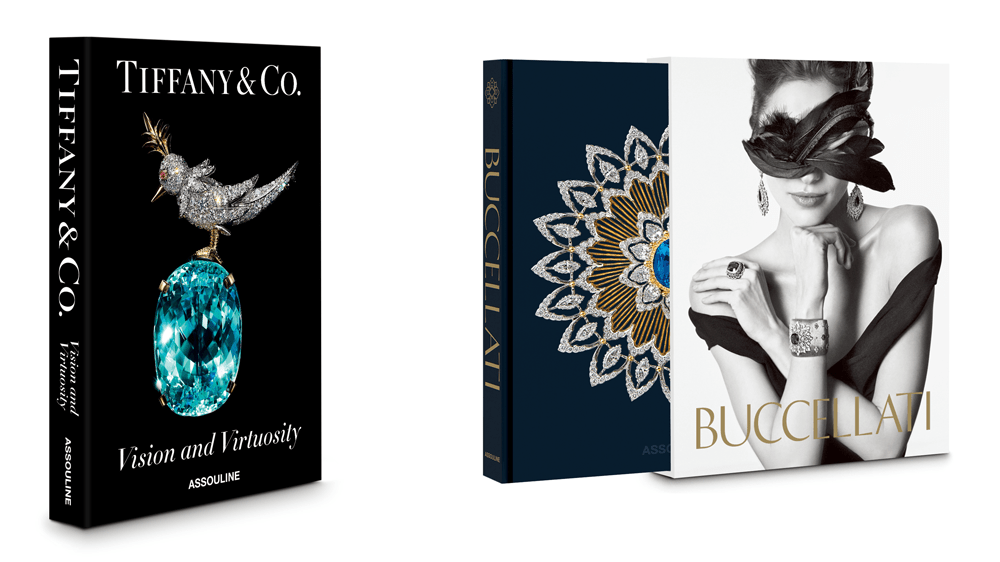 Every holiday season, a slate of weighty new coffee table books devoted to jewelry hit the shelves. And this year is no different. Of the six tomes highlighted below, three are brand-centric and three cross brand lines, but all are distinguished by gorgeous imagery, scintillating stories and a shared message: You can never go wrong with the gift of jewelry (even in book form).

B Is For Bulgari: Celebrating 50 Years in America

Organized in a charming alphabetical format (A is for Andy Warhol, M is for Monete, S is for Serpenti…), B Is For Bulgari tells the history of the famed Roman jeweler through the lens of its five decades in America. Using never-before-shared anecdotes and spectacular images by legendary photographers including Richard Avedon, Gian Paolo Barbieri and Francesco Scavullo, co-authors Fasel and Yaeger delve deep into Bulgari’s influence on the American jewelry scene. “It’s the story of three brothers who expanded their brand into an international name,” Fasel tells Robb Report. “The first place they went outside of Italy was New York City. It’s always been an overlooked story.”

Buccellati: A Century of Timeless Beauty By Alba Cappellieri

Laced with anecdotes and black-and-white photographs that trace the history of Buccellati, from its founding in Milan in 1919 to the present day, this elegant book, published by Assouline, is for lovers of Italian style, Milanese craftsmanship and the story of a family of jewelers bound through generations. Featuring contributions by Buccellati scion Andrea Buccellati, journalist Vivienne Becker and Italian cultural authority Franco Cologni, the volume will make you wish you could teleport to the Bucellatti boutique on Milan’s Via Monte Napoleone and indulge in the brand’s singular creations.

Jewelry’s starring role in hip-hop culture gets the deluxe treatment in this photographic history by Vikki Tobak, a journalist from Detroit who grew up enthralled by the music and culture of early hip-hop. From diamond-encrusted grills to oversized “truck” style chains, iced-out jewels helped shape the identities of some of hip-hop’s biggest stars, many of whom contributed their words and images to the tome.

“Slick Rick wrote the foreword to the book—he is the don of hip-hop jewelry,” Tobak recently said on The Jewelry District podcast. “LL Cool J contributed an essay about a trip he took to the Ivory Coast in 1988, talking about the African link—no pun intended—to hip-hop jewelry. And ASAP Ferg, who represents the contemporary hip-hop world, and was the first hip-hop ambassador to Tiffany—he, too, contributed. They were all really excited. The jewelry has been a part of this culture for so long, everyone said, ‘Of course, there has to be a book on it.’”

Jay’s sumptuous new coffee table centerpiece, published by Roli Books, explores how the world’s most influential design houses have looked to Indian culture, craft and history to inform their own creations. The country’s fabled jewelry tradition is at the heart of the book (the necklace on the cover is a “Tutti Frutti” style made by Cartier for Daisy Fellowes in 1936), but lovers of fashion, textiles and Indian artisanry will be enchanted by its thoughtfully researched take on India’s influential—and quintessential—style.

Due out in January, this guide to the fine jewelry universe is worthy of the “ultimate” boast in its title. It includes an introduction to jewelry basics (such as the four Cs), insider info for jewelry enthusiasts (a hit list of the best museum collections to visit around the world), an essential glossary, recommendations for designers to follow and a buyer’s guide to investing in antique and vintage pieces. And it’s chock full of essential jewelry stories, from the Hope Diamond to Elizabeth Taylor’s La Peregrina pearl.

What began as a catalog to accompany the exhibition “Vision and Virtuosity” at the Saatchi Gallery in London, Tiffany & Co. Vision and Virtuosity, published by Assouline in both Icon and Ultimate editions, is now a full-blown coffee table book that tells the story of the American jeweler from every conceivable angle. Memorable advertisements, eye-catching window displays, signature diamond settings, the classic film Breakfast at Tiffany’s and the fabulous yellow Tiffany Diamond all get top billing in these pages. But as the striking cover image—of Jean Schlumberger’s famed Bird on a Rock brooch—shows, the heart and soul of the book is Tiffany’s extraordinary jewelry.