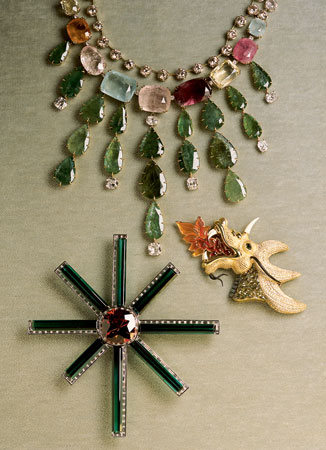 Chanel’s Transition necklace denotes the progression of day into evening

through an ombré of sapphires ranging in color from pale sky blue to deep violet. The captivating design reflects Mlle. Chanel’s fascination with the planets, stars, and night sky—themes she often expressed in her original diamond jewelry from the 1930s that depicted stars and comets.

It took more than a year to acquire the gems and then assemble the Transition necklace in Chanel’s Parisian workshops. Twenty-four pear-shaped sapphires weighing more than 130 carats in total are gently suspended around the neck like large raindrops; accenting them is a singular 7-carat pear-shaped diamond centerpiece. The 18-karat white gold piece is also pavéed with 912 sapphires in varying shades of blue and 55 diamonds.

H. Stern displays irreverence to the rarity and value of the 18 large emeralds in this necklace by setting them in a decidedly casual manner with citrines, pink tourmalines, beryls, rubies, and 61 diamonds.

Ricardo Bastaspent more than a year crafting this fire-breathing dragon brooch appointed with Mexican fire opals flowing from the mouth, ivory teeth and tusk, a vivid demantoid garnet eye, green sapphires, and 584 diamonds that embellish the back of the neck.