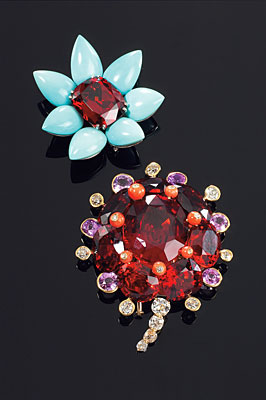 James de Givenchy enjoys presenting clients with designs that include stones they never before have seen, rarities such as fiery orange mandarin garnets or scintillating green tsavorite. “I simply love the unexpected in a gemstone,” says the 43-year-old designer, who sells his Taffin collection at his by-appointment salon on Fifth Avenue in Manhattan. Such extraordinary colored gems are the focal points of de Givenchy’s imaginative, artistic creations, which have earned him comparisons to Jean Schlumberger and Verdura.

De Givenchy habitually removes his gems from his safe and handles them as though they were touch stones, waiting for a design revelation. Sometimes a concept comes instantly; other times he may spend months gazing, holding, and sketching before he determines the ideal treatment for a particular stone. His museum-quality specimens include a 66-carat African mandarin garnet, which he placed at the center of a $200,000 floral brooch and surrounded with seven additional mandarin garnets, weighing a total of 137 carats, plus pink sapphires and old mine-cut diamonds. “Garnets of this size and quality are rarer than an exceptional diamond,” says de Givenchy, who acquires his gems through his acquaintance with a network of dealers located throughout the world.

Recently, a Burmese dealer arrived at his salon offering an intriguing 15-carat, cushion-cut, color-change sapphire that de Givenchy snapped up on the spot. “This has to be set in a ring,” he declares, “because the wearer will want to gaze at this amazing stone when it turns from blue to purple in different light. It’s the ultimate mood ring.”