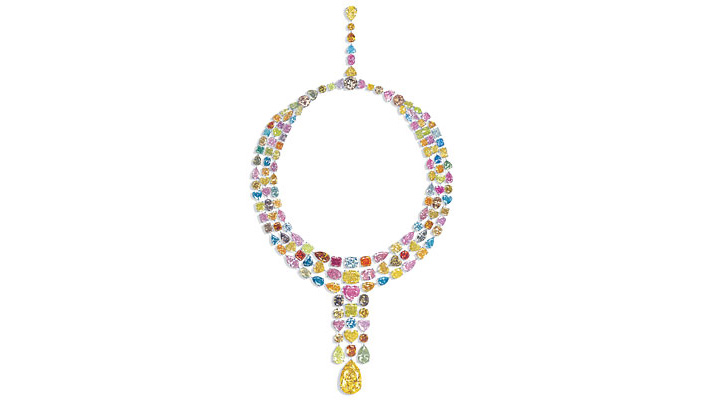 Using only magnifying loupes and their intuition, diamond mogul Laurence Graff and his top gemologists spent two hours assessing the value of a newly discovered 603-carat rough diamond last October in Antwerp. Graff was one of 10 prominent diamond dealers who came to Belgium to evaluate and bid on the stone, the 15th-largest diamond ever unearthed. He claimed the gem with an offer of $12.4 million, a sum that is reportedly one of the highest prices ever paid for a rough stone.

“We were lucky,” says 69-year-old Graff, who christened his trophy the Lesotho Promise, for the African kingdom where it originated. Graff’s coup, however, can be attributed to more than luck. His bold buying style and determination to acquire the finest gems have earned him the moniker King of Diamonds, a title previously held by Harry Winston. Graff, whose personal fortune was recently valued at $2.55 billion by London’s Sunday Times, has built an international business with annual sales exceeding $300 million while amassing what might be the world’s largest collection of exceptional diamonds.

Last fall, Graff unveiled the Graff Vivid Yellow, a 100.09-carat fancy diamond priced at $25 million. When he first saw the gem in its rough state, as a 190.72-carat stone, in January 2006, he was unsure whether its fiery orange color was natural. Once the stone was authenticated as a genuine, untreated diamond, he says, “I had to have it.” Graff entrusted the prize to his best New York diamond cutter, Nino Bianco, who spent nearly a year cutting the rough stone into a cushion-cut gem. “We can assess what a diamond might reveal, but the heart-stopping moment is when it is finally cut and polished after months of pressure and decision making,” says Graff.

This past spring, Graff began overseeing the several-months-long process of cutting the Lesotho Promise, which is expected to yield five exceptional D-flawless diamonds ranging in size from 25 to 80 carats. “Buying stones on this level is a huge financial gamble. We’re talking about serious amounts of money, and you never really know what the rough is going to yield,” asserts Henri Barguirdjian, Graff’s U.S. president and CEO.

In addition to his recently acquired museum-quality specimens, Graff presented an exceptionally rare rainbow-colored diamond necklace late last year. The design comprises 142 diamonds in shades of blue, red, purple, orange, and green, with a 37-carat fancy intense yellow pear-shaped diamond drop. “I could have made several pieces of jewelry with these rare diamonds,” says Graff, “but I decided to make this stupendous necklace.”

Such boldness has characterized Graff’s entire career. At age 15, he entered a jewelry-making apprenticeship in Hatton Garden, London’s jewelry manufacturing district, and after only two years of training, he opened his own workshop. Shortly after that, he began trading small diamonds and eventually larger, higher-quality stones. With the opening of his first London shop in the early 1960s, he crossed over into retailing while continuing to operate as a diamond trader. Today, he has 18 boutiques and employs more than 700 people worldwide. His largest diamond-cutting and -polishing factory is located in Johannesburg, South Africa, but he also owns manufacturing operations in Antwerp, New York, and Mauritius. At Graff’s London headquarters, which is situated in a grand townhouse in the city’s fashionable Mayfair district, more than 80 craftspeople produce thousands of pieces of jewelry annually.

After trading diamonds for more than half a century, Graff is still captivated by the chase for a premium stone. He often flies from continent to continent on his private jet to explore potential acquisitions. In his travels, he seeks out diamonds as well as contemporary art, his other obsession. His competitive spirit also has prevailed in that realm, enabling him to assemble a world-renowned collection that features works by Francis Bacon, Andy Warhol, and Picasso.