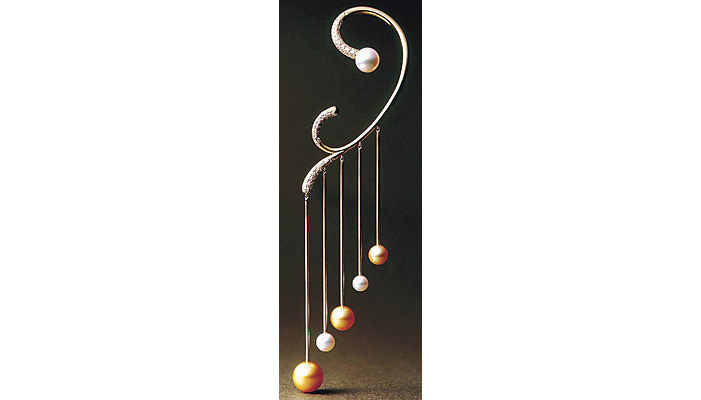 Golden South Sea pearls are prized for their extreme rarity; no more than 2 percent of the pearls produced by gold-lipped oysters near Indonesia and the Philippines exhibit the rich yellow color classified as golden. Mikimoto—whose founder, Kokichi Mikimoto, introduced pearl cultivation in 1905—spent two years amassing the 173 golden South Sea pearls for its new Mikimoto Couleur Soleil (888.701.2323, www.mikimotoamerica.com) collection. The line comprises 23 designs, and each piece, including a $330,000 golden pearl choker accented with 31 carats of yellow and white diamonds, was designed to enhance the yellow tones of the pearls. The old-guard pearl house also presented such inventive creations as a curvaceous earpiece with a series of dangling golden pearl drops. —Jill Newman

While a round pearl is judged by its luster, smoothness, and perfectly spherical shape, exotic pearl varieties are desired for their imperfect, asymmetrical forms. For its one-of-a-kind designs, Lotus Arts de Vivre (available at Betteridge at Greenleaf & Crosby, 561.655.5850, www.lotusartsdevivre.com), a family-owned jewelry and accessories company based in Thailand, prefers irregularly shaped South Sea baroque, freshwater, and Basra pearls, which were discovered a century ago off the coast of modern Iraq. Lotus’ jewelry makers embedded one ebony cuff with a mélange of pearls in various shapes, sizes, and colors, and they selected a fossilized shell closure for a necklace made with multiple strands of gray freshwater pearls. “We try to maximize the beauty of the pearl by minimizing our human interference with the natural form of the pearls,” says owner Rolf von Bueren. —Jill Newman