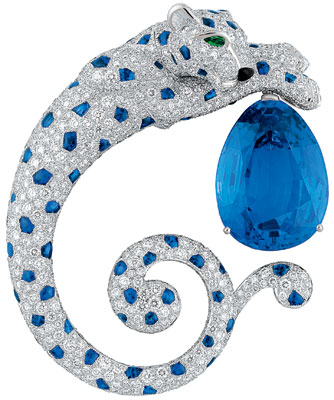 When Cartier created its first jeweled panther brooch in 1923, the Parisian jeweler had no idea that the sleek cat would evolve into an enduring icon. Over the ensuing decades, the Duchess of Windsor, Barbara Hutton, and other fashionable figures adorned themselves with Cartier’s signature feline, making it a symbol of lavish and seductive style.

This year, Cartier returned to its roots to develop the high-jewelry Collection Panthère de Cartier, which reinterprets the original panther designs to make them relevant for today.

“The symbolic panther is the heart and soul of our brand,” says Stanislas de Quercize, Cartier’s president and CEO. “It’s a celebration of women—their strength, their charm, their seduction, and their power.”

While Cartier has continued to create a range of panther designs over the years, the new collection makes a definitive statement with an array of noteworthy brooches, necklaces, and bangles. One extraordinary brooch, priced at approximately $850,000, depicts a graceful diamond-and-sapphire spotted cat resting its paws on a 65-carat blue sapphire.

Each piece starts with an artist’s sketch of a statuesque panther in one of a variety of poses. Then a series of artisans spends more than a year sculpting the gold or platinum animal form and hand-setting each gemstone. This painstaking attention to detail culminates with the placement of two emeralds for the eyes, an enchanting finishing touch that makes these cats even more beguiling.

When Vivid opens its first boutique on Madison Avenue later this year, it promises to rock the diamond landscape. Until now, the diamond trade has been dominated by a handful of industry veterans who operate in an insular world largely controlled by De Beers. However, all that is changing now that Russian Lev Leviev, one of Vivid’s owners, is taking a leadership role in the diamond supply chain. Aside from his interest in Vivid, Leviev’s company, Lev Leviev Group, is the largest producer of polished diamonds and the second largest diamond mining company in the world after De Beers.

Through his resources, Leviev has supplied Vivid with an unrivaled selection of extraordinary stones, including a 1.73-carat fancy red diamond worth more than $3 million and a 4.69-carat fancy deep green diamond valued at over $4 million. For those in the market for D-flawless stones of 5 carats and larger, Vivid currently has about 100 in stock, along with more than 50 rare, colored diamonds.

The New York–based Vivid is currently selling its rare selection of stones to private clients and a few select jewelers while it waits for its retail space on Madison Avenue to be finished.

Last year, Tiffany & Co. acquired what it believes is the world’s finest collection of conch pearls. These exceedingly rare pinkish pearls are gathered from the queen conch, a creature that lives in the tropical waters of the Caribbean and Gulf of Mexico. Threatened by overfishing and environmental pollution, queen conchs are primarily harvested for their meat. Unlike other pearls, conch pearls cannot be cultivated, which makes them highly prized collectibles; it is estimated that a gem-quality conch pearl is found in only one of every 10,000 queen conchs.

Tiffany’s cache of 30 gem-quality conch pearls was obtained from a marine archaeologist who collected them over several years. The jeweler spent nearly a year developing 15 designs—some inspired by the company’s original Edwardian-era conch pearl pieces—that capture the beauty of these gems. Tiffany will display the collection (priced from $11,000 to $165,000) in select stores this summer.

Stonecutter Bernd Munsteiner, renowned for his revolutionary and artistic techniques, is celebrating his 60th birthday with a retrospective exhibit and accompanying book, Reflections in Stone (by Christianne Weber and Wilhelm Lindemann, Arnoldsche Art Publishers, 2004). The show will be at the Rheinische Landesmuseum in Trier, Germany, through October, and will feature more than 150 pieces of his work. The exhibit will then travel to other museums in Germany, London, and Paris.

Munsteiner was born into a family of stonecutters in Idar-Oberstein, Germany, the global center for gemcutting for the past 500 years. Early on, he forged his own avant-garde style with free-form cuts that reflect the light from many angles. “Bernd paved the way for an entirely new direction in stonecutting,” says Patricia Faber, co-owner of the Aaron Faber Gallery in New York City, where Munsteiner’s collection is available. “As a result of his work, people view stonecutting as an art form in and of itself.”

This year, his work takes a new direction with what he calls “wall ornaments,” or artworks using colored gemstones as the medium. In this series, Munsteiner combines rutilated quartz, citrine, amethyst, aquamarine, and other stones set in geometric patterns. To satisfy his following of international fans, the artist has also created a series of smaller grids that can be worn as pendants.