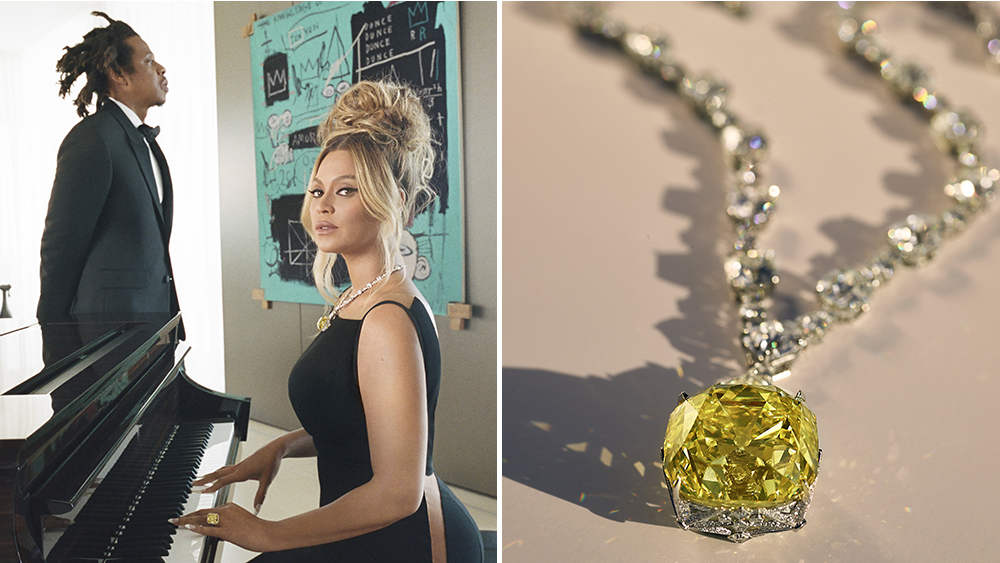 Beyoncé and Jay-Z’s much-anticipated campaign for Tiffany & Co. has arrived—and it features a few notable firsts.

On Monday, the American jeweler revealed its fall 2021 campaign, called “About Love,” which stars the music industry power couple. Photographed by Mason Poole, the images are the first time they’ve appeared in a campaign together. It’s also the first time the Tiffany blue Jean-Michel Basquiat painting in the background, entitled Equals Pi (1982), has been seen publicly. In the images, Beyoncé wears the iconic Tiffany Diamond—marking the first time the jewel has been featured in an advertising campaign. (She’s the first Black woman to wear the diamond, and the fourth person to wear it in Tiffany’s history.)

The yellow diamond weighs 128.54 carats and boasts 82 facets. It was discovered in South Africa’s Kimberley Mines in 1877; Tiffany’s founder, Charles Lewis Tiffany, purchased the rough diamond the following year. It’s been considered an important gemological discovery ever since, and today hangs from a platinum necklace set with 16 cushion-cut diamonds and 46 round brilliant diamonds. Altogether, the white diamonds alone weigh over 95 carats. Jay-Z, meanwhile, wears a pair of one-off cufflinks inspired by jewelry designer Jean Schlumberger’s Bird on a Rock brooch. A number of recent creations from the brand’s T Collection are also spotted throughout the campaign.

Beyoncé and Jay-Z in the new “About Love” campaign for Tiffany & Co.  Mason Poole

The images will be joined by a short film director Emmanuel Adjei created, which will feature a musical performance of the song “Moon River,” written for the 1961 Audrey Hepburn movie Breakfast at Tiffany’s. In Adjei’s film, Beyoncé sings the song and plays piano while Jay-Z records her on a Super8 camera.

“Beyoncé and Jay-Z are the epitome of the modern love story,” said Alexandre Arnault, Tiffany’s executive vice president of product and communications, in a statement about the campaign. “As a brand that has always stood for love, strength and self-expression, we could not think of a more iconic couple that better represents Tiffany’s values. We are honored to have the Carters as a part of the Tiffany family.”

As part of its partnership with Beyoncé and Jay-Z, Tiffany is underscoring its support of underrepresented communities by pledging $2 million toward scholarships and internship programs for students of historically Black colleges and universities.

The “About Love” campaign will launch globally on September 2, and the short film will debut on September 15 on Tiffany.com.