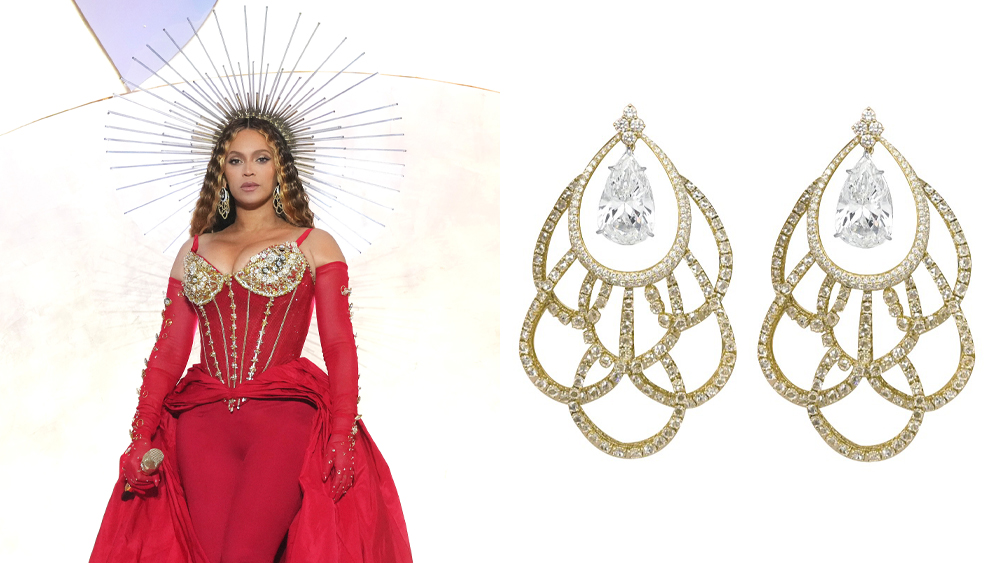 The acclaimed singer-songwriter performed at the grand opening of Atlantis The Royal in Dubai on Saturday wearing $7.5 million worth of bling by Lorraine Schwartz. The flashy new luxury resort reportedly paid Bey $24 million to headline the private event that was attended by 1,500 A-listers, journalists and influencers. Kendall Jenner, Liam Payne and Ronan Keating were just a few of the celebs in the crowd, according to Bloomberg.

The 90-minute set, which started with a cover of Etta James’s “At Last” and finished with a rendition of “Drunk in Love,” included no less than three wardrobe changes. To open the show, the 41-year-old star wore a yellow feathered gown with a pair of Lorraine Schwartz earrings featuring two 100-carat emeralds surrounded by 60 carats of white diamonds and a 30-carat yellow-diamond ring. Mrs. Carter then donned a bedazzled red jumpsuit and a pair of the jeweler’s gold lace earrings with 50-carat pear-shaped diamonds in the center. For her final act, she wore a sparkly pink mini dress with diamond pyramid earrings totaling more than 60 carats.

The 19-song extravaganza, which culminated with an epic fireworks display, gives some indication as to what travelers can expect at the billion-dollar destination. Located just a short stroll away from the original Atlantis on a private beach, the 43-story resort includes 795 rooms and suites, a 295-foot-long infinity pool, a water fountain that “breathes fire” and the largest jellyfish aquarium in the world.

Beyoncé’s performance at the hotel, which marks her first full concert in more than four years, has caused a little controversy, though. Homosexuality is illegal in the United Arab Emirates; as a result, many fans are questioning Beyoncé’s decision to perform there as she is considered an ally by the LGBTQ+ community. The singer’s highly acclaimed 2022 album Renaissance references queer artists, people of color and other marginalized groups, although she reportedly did not perform any songs from that record.

“No beef but I’m struggling to understand why Beyoncé, who has half a billion dollars, would accept $20 million to make her debut performance of the Renaissance album, a record which lifts heavily from queer culture, in Dubai, a country where LGBT rights aren’t recognized,” one Twitter user wrote.

Whether or not you agree with Bey doing the gig, there’s no denying that her Lorraine Schwartz ice was on point.