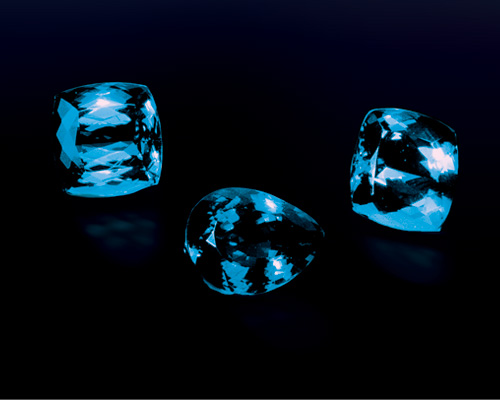 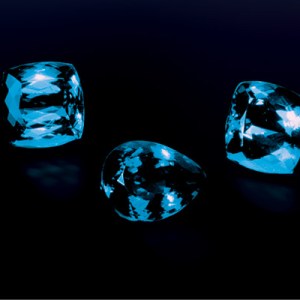 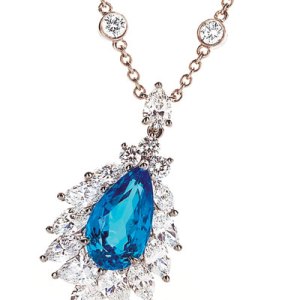 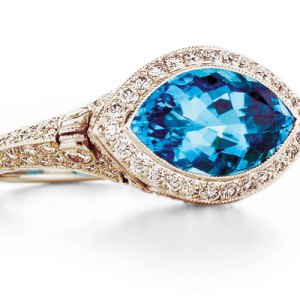 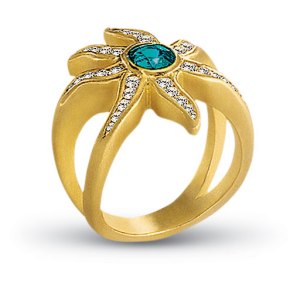 During what was supposed to be a routine gem deal in Brazil in 1989, miner Heitor Barbosa emptied the contents of his bag onto the table in front of gem dealer Marcelo Bernardes and spread out about 6.5 pounds of bright blue mineral crystals. The reserved and savvy Bernardes was impressed by the stones’ electric blue color, but he was also skeptical. He had never seen tourmalines like these before, and he is an expert, after all, having grown up in the family gem business. The discovery of a new gemstone is hardly an everyday occurrence.

As he recalls the meeting, Bernardes, speaking in impeccable English, sounds like an old fisherman relaying a tale of one that got away. Traveling by bus in the northeastern Brazilian state of Paraíba along 10 miles of rugged dirt roads, he is accompanied by a small contingent of fellow gem dealers, gemologists, and journalists who have been invited to tour the Paraíba Tourmaline Corp. mine. The destination is the remote town of São José da Batalha. The route passes fields of cactuslike plants, dirt soccer fields, impoverished villages, and groups of children, who stare, point, and wave at the bus as it approaches the source of Brazil’s most expensive colored gemstone, set in the ground under one of the country’s poorest regions.

“We had never paid such a price for tourmalines before,” Bernardes says, continuing his story about his first encounter with Paraíba tourmaline and recalling how he balked at the price requested. Barbosa responded by comparing his stones to priceless works of art by van Gogh, paintings that, unlike the tourmaline, are reproducible to some degree. “ ‘Look at the beauty of these stones,’ he said to me,” says Bernardes. “ ‘They took millions of years to form and then they had to be found. Why are they not worth that [price]? I think they should be worth more.’ ”

Barbosa’s deft salesmanship did not sway Bernardes. Although the color was brilliant, the size of the stones did not impress him. They averaged about a gram each, which would yield a gem of about one carat. Bernardes insisted on testing a sample, which demonstrated that the Paraíba tourmaline’s color is attributed to its high copper content. In fact, Paraíba tourmaline is the first known gemstone with copper dioxide (in combination with manganese) as its color source. “It’s a unique geological situation that is very difficult to repeat anywhere else,” explains Bernardes, noting that the color of a similar tourmaline, which was subsequently discovered in Nigeria, pales in comparison to its Brazilian counterpart and, accordingly, sells for a tenth of the price. After confirming that the stones were natural and authentic, Bernardes offered to buy the entire lot. Barbosa refused but promised to return every month with a few grams for Bernardes, a commitment he honored for many years.

While Bernardes missed the opportunity to corner the market in Paraíba tourmaline, his connection to the source enabled him to introduce the stone in 1990 at the annual gem fair in Tucson, Ariz., where it immediately became a hot commodity. During the four-day show, wholesale prices skyrocketed from a few hundred dollars a carat to more than $2,000. “It’s astonishing—no other gemstone has experienced such a price hike and demand,” says Bernardes. “Of course, rubies, sapphires, and emeralds can sell for $10,000 per carat, but those are stones with a 2,000-year history.  This stone reached those prices in only a few years, and it never came down.”

Soccer, samba, and sex may be Brazil’s best-known cultural passions, but the country is also one of the world’s most abundant sources of colored gemstones. Throughout the state of Minas Gerais, which translates to “general mines,” the earth is fertile with crystal bounties: emerald, aquamarine, imperial topaz, tourmaline, and the list goes on. Paraíba tourmaline, however, is unique because it is found in only one tiny, remote region of the country. Rarity aside, what impresses people most is its vivid blue hue—some liken it to the color of Windex.

“You don’t find many materials in nature that have that color,” says Brazilian jewelry designer Antonio Bernardo, who has a boutique in South Miami, Fla. “Using Paraíba makes sense for me because it is a stone that was discovered in Brazil, and it shows the maximum color that our country can produce. Like our music, it is very intense and powerful.”

Such intensity makes Paraíba the perfect gemological symbol for Brazil, says Lucas Amelung, the director of acquisitions at Molina Fine Jewelers in Phoenix, Ariz., who is as passionate about the country as he is about gems. “More than any other stone to come out of Brazil,” he says, “Paraíba tourmaline truly represents the essence of the country, with its electrifying quality and intense blue color that evokes the ocean and sky.”

Indeed, the stone’s striking hue stops clients in their tracks at Tiffany & Co., one of the few American jewelers that stocks Paraíba tourmaline pieces, though its supply is limited. “Our connoisseur customers are looking for something very special,” explains Melvin Kirtley, group vice president. “When they see this stone, people have an immediate reaction to it—they fall in love with it. Then, when they find out how rare it is, they just want to have it.”

Fulfilling those wishes presents a challenge. Kirtley says that Tiffany gem buyers are constantly on the lookout for top-quality Paraíba stones, but they are not readily available. Because the gems are so difficult to come by, when Tiffany does acquire Paraíba tourmalines, it designs jewelry around the stones. Among its inventory is one loose stone of about 8 carats and a mere handful of finished pieces, including a ring set with an oval 17.05-carat stone and diamonds that is priced at about $578,000. Another ring with a cushion-cut Paraíba tourmaline weighing 8.26 carats carries a price tag of about $203,500. But before the stones were cut, polished, and set into these jewelry pieces, they had to be dug out of the earth by hand thousands of miles away in dusty São José da Batalha.

Because the stones are so valuable and found only in such a small geographical area, the history of Paraíba tourmaline is checkered. During most of the 1990s, Barbosa’s original mine was embroiled in highly contentious ownership disputes that brought mining of Paraíba tourmaline to a near standstill from 1992 through 1996. The meteoric rise in value of Paraíba tourmaline drew many contenders, including politicians, into a bitter fight for the mining rights. Barbosa was able to retain about 80 percent of his original claim, and the remaining 20 percent was assumed by João and Edna Silvestre Henrique de Souza, who established the Paraíba Tourmaline Corp.

Security measures are conspicuous at the Paraíba tourmaline mine. A guardhouse stands at the entrance to the compound, and a wired fence winds around the entire property. One gem-producing hill is clearly marked by a white fence running down its side, dividing the aboveground holdings of the de Souza family from those of Barbosa. Underground boundaries, however, are far less obvious.

The mine’s narrow, dusty tunnels call to mind the inner passages of an Egyptian pyramid. Walking stooped through the meandering passageways, Bernardes jokes that being small is a prerequisite for employment. He and the rest of the group are careful to avoid the holes scattered in a seemingly random pattern in the floor—aborted mining attempts marked by flimsy yellow tape. The tourmaline’s soft, white kaolin host material is fairly easy to work with a pickax—you can even scratch it with your fingernails. Its composition, however, makes the tunnels vulnerable to collapse during rainy periods, which are rare, with the exception of the past two years.

The primary challenge is finding the elusive pockets of gem-producing deposits, because faults and other geological factors cause the narrow veins to appear and disappear haphazardly. Consequently, the mine has come to resemble Swiss cheese as attempts to locate the deposits are started, abandoned, and initiated elsewhere.

“The method used to mine Paraíba tourmaline automatically keeps production low,” says International Colored Gemstone Association (ICA) President Joe Menzie, an affable and burly New York gem dealer who is among the group touring the mine. “It doesn’t present in continuous veins with large gem-producing pockets. Instead it’s in little pockets here and there, so there is no large-scale production.”

Mine-owner de Souza, a bespectacled, soft-spoken attorney by trade, explains that there is currently no high-tech alternative to extracting the stones from the earth. “Because the work is so slow, I believe this area has the potential to be productive for many generations,” he says, estimating that only 10 percent of the area has been thoroughly mined. “It is a rare stone, but it’s here. It’s just a matter of working hard.”

Just how hard is mind-boggling. Considering the staggering statistics, Barbosa’s comparison of the tourmaline to the works of van Gogh seems like an understatement. In an average month, the de Souzas’ mine will wash about 1,800 tons of earthen material to yield only about 40 grams (which translates to about 40 carats) of Paraíba tourmaline, of which only 10 grams are premium quality.

“That is how rare the material is and why it commands a high price,” explains Bernardes. “The geological coincidence for the crystals to form and to get the desired color saturation, for which you need high copper content—it all has to come together. It’s like finding a needle in a haystack—even worse, because in the haystack, you know the needle is there somewhere and you will find it one day, but here you’re never sure.”

Six months can pass without producing a single piece, he notes. Then a pillar containing two or three pockets might be discovered. “It’s so erratic,” Bernardes adds. “It’s just impossible to know where the stones are.”

Consequently, on the rare occasion when an important discovery is made, de Souza can hardly contain his enthusiasm, while his wife, an elegant woman who grew up in the gem business, is more restrained. Like a proud papa, de Souza ushers his guests into a back room to show off the company’s latest treasure, a large, deep blue crystal that is radiant even in rough form.

The supply of Paraíba stones of such significant size has virtually dried up. “The demand is huge,” says the ICA’s Menzie, noting that most of the available stones are about only 1 carat in size. “There are buy orders in with high-end retailers to act as soon as anything special comes up. I have a couple of pieces, but nothing bigger than 4 carats of good quality, and there’s nothing above 5 carats—it’s just not out there.”

Perhaps, but if such stones do exist, Amelung, Molina’s acquisitions director, intends to find one. A collector of museum-quality gems has commissioned him to locate a fine-quality, neon blue, 30- to 40-carat Paraíba stone. Such a specimen would easily fetch well over $1 million. “It takes a lot of time and patience,” says Amelung, “but that only makes it even more special when you finally find it.”