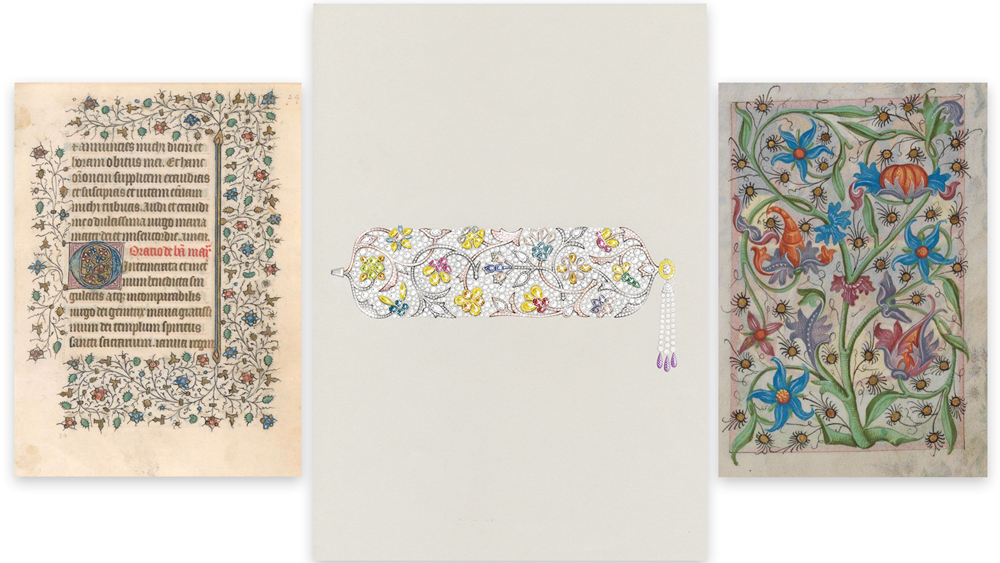 A stunning bracelet inspired by a 15th-century manuscript and conceived by Geneva-based jewelry house Boghossian’s CEO, Albert Boghossian, has sold for $4.5 million at Christie’s Magnificent Jewels auction in Hong Kong—more than $1 million above its highest estimate. The Manuscript colored diamond bracelet now holds the record for the most expensive colored diamond bracelet ever sold.

“I started to buy these colored diamonds with no clear idea in mind. I just knew I wanted to build something,” Boghossian told the Financial Times earlier this spring. The inspiration to set his collection of gems into a dazzling bracelet came after Boghossian encountered the Waldburg Prayerbook, a German artifact that dates back to 1486; it is presently housed in the State Library of Württembergische in Stuttgart, Germany.

The bracelet showcases what Boghossian has become legendary for: exceptional stone-setting. In this piece a motif called Les Merveille was used, which allows gems to appear weightless, without hardly any visible metal settings. Chin and the Boghossian team searched for seven years to find appropriately sized seed pearls and rare green, blue, and violet colored diamonds that would fit the nearly one-inch-wide bracelet’s elaborate floral motif.

Once all the gems were in order, the bracelet took 18 months to assemble—it reportedly had to be fully dismantled several times throughout the process. “It required multiple gem setters and artisans working in rotation on the piece to be able to complete this sublime and intricate bracelet,” says Boghossian. The final design is composed of 442 diminutive cabochon pearls and more than 2,000 diamonds.

In a release from the auction house, François Curiel, Christie’s chairman in Europe and Asia, calls the piece “ethereal, feminine, contemporary, sophisticated, and secretive”—the latter descriptor referring to the bracelet’s exquisite diamond backing, something only the wearer (and now the owner) can enjoy.