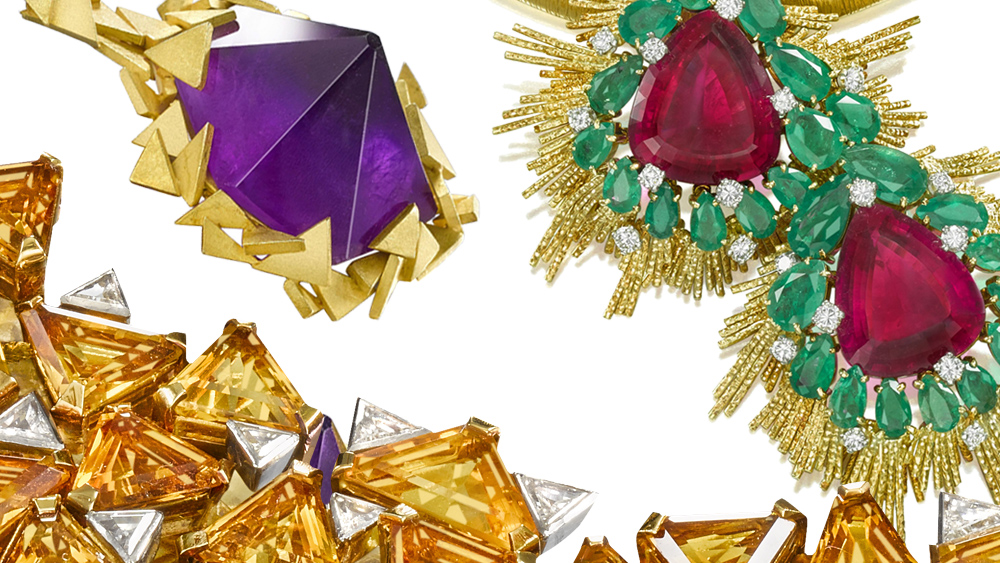 If you don’t know the name Andrew Grima, you probably should. While not quite as recognizable as Louis-Francois Cartier or Louis Comfort Tiffany, the Italian-born artist’s highly imaginative modern designs have left a unique, indelible mark on the jewelry world. Devoted collectors of Grima’s pieces are enamored of their vibrant configurations, exciting colors, and unusual materials—think radiant citrine, deep-purple amethyst, mesmerizing slices of agate, carved jade, seashells, South Sea pearls, and rough-edged Australian opals. These gems became part of Grima’s wearable works—all of them a far cry from the more traditional, diamond-driven adornments Grima’s counterparts were making when he first began sketching jewelry designs in London in the 1960s.

Now, a decade after the designer’s death, a landmark auction aims the spotlight back on Grima’s pioneering, boundary-pushing creations. On September 20 in London, Bonhams will auction 55 of Grima’s designs in a collection that they say is the largest ever brought to auction.

Here, with insight from Susan Abeles, director of U.S. Jewelry at the auction house, we touch on some essential features of Grima’s style and why his designs continue to resonate with collectors today.

Grima’s design talents are even more remarkable in light of his unusual path to the jewelry trade. After attending school for mechanical engineering at the University of Nottingham and serving in Burma during World War II, Grima returned to London in the late 1940s and began working at his soon-to-be father-in-law’s jewelry store, H.J. Company Ltd.

Though he received no formal jewelry training, Grima had an eye for unusual forms and exceptional gems. At the age of 27, in a moment that would prove fateful, Grima convinced his father-in-law to purchase a suitcase full of large Brazilian stones—tourmalines, amethysts, citrines, and aquamarines—being offered by a pair of gem dealers. The stones were unlike anything in the windows on London’s high street, and their divinely unfettered beauty would eventually inspire some of his most stunning designs. 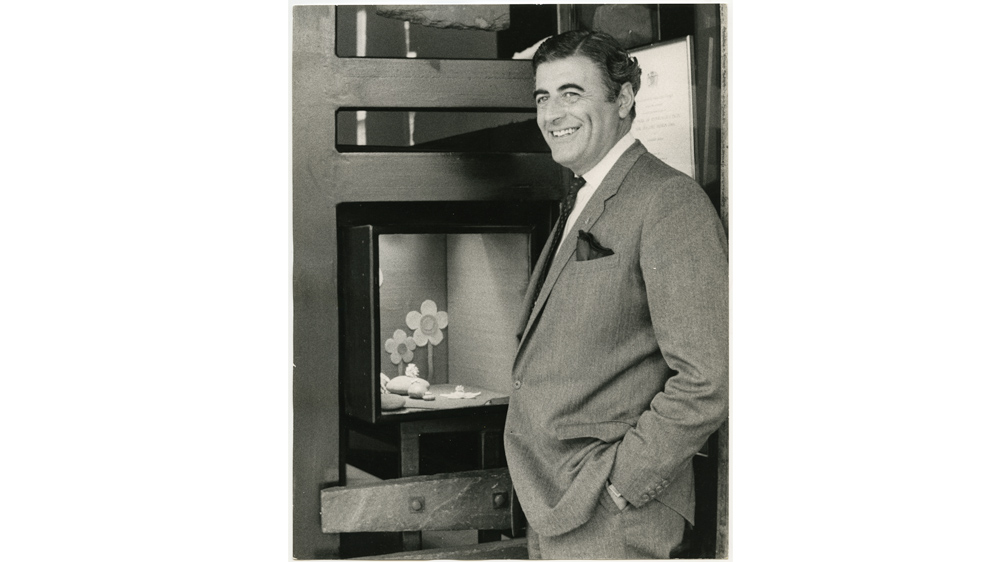 In the early 1960s—years after taking over his father-in-law’s business and acquiring that valise of stones—Grima finally began experimenting with gems in earnest. “He was not a jeweler; he was a designer,” clarifies Susan Abeles, director of U.S. Jewelry at Bonhams. “I think that he was very much taken by what he saw out in life—whether it was nature or architecture—and how it translated into a wearable piece of sculpture. His designs were radical, both for his choice of color and his choice of gemstones.”

In addition to his fascination with less expected gems like Australian opals, citrines, watermelon tourmalines, topaz, and golden South Sea pearls, Grima was enthralled with textured metal. He investigated white-gold alloys, cobbled together gold wire for pieces that rippled with the wearer’s movements, and made gold casts of holly, bay, and geranium leaves as well as delicate lichen (a commission from Princess Margaret, wife of Lord Snowden). Grima’s designs are as naturalistic as they are vividly sculptural. “There’s a rhythm that you feel when you look at his work,” says Abeles. “There’s a vibration, a pattern, a movement. I think it’s interesting that you can take something as still as a piece of gold and a gemstone and create that.”

Though Grima’s work shied away from a more traditional, overt focus on precious gems, he often added subtle glimmer to his designs through petite, precisely placed diamonds—as shown in an opal pendant featured in this month’s auction, which boasts sparkling diamonds set amidst craggy curves. “His designs look amazing on,” says Abeles. “I think art jewelry is not always easy or comfortable to wear, but [Grima’s] are. He was also in tune to the importance of balance and color in each piece.” 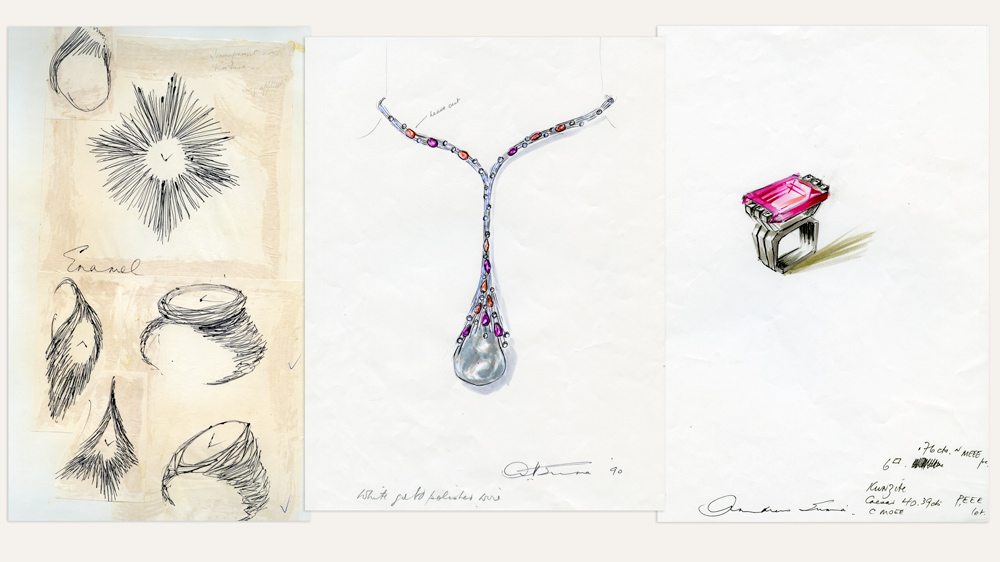 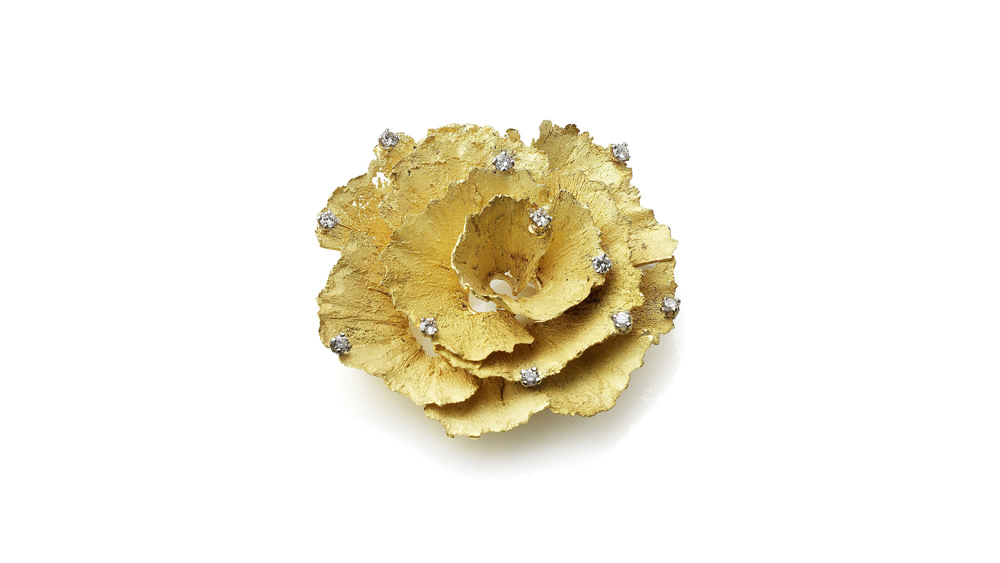 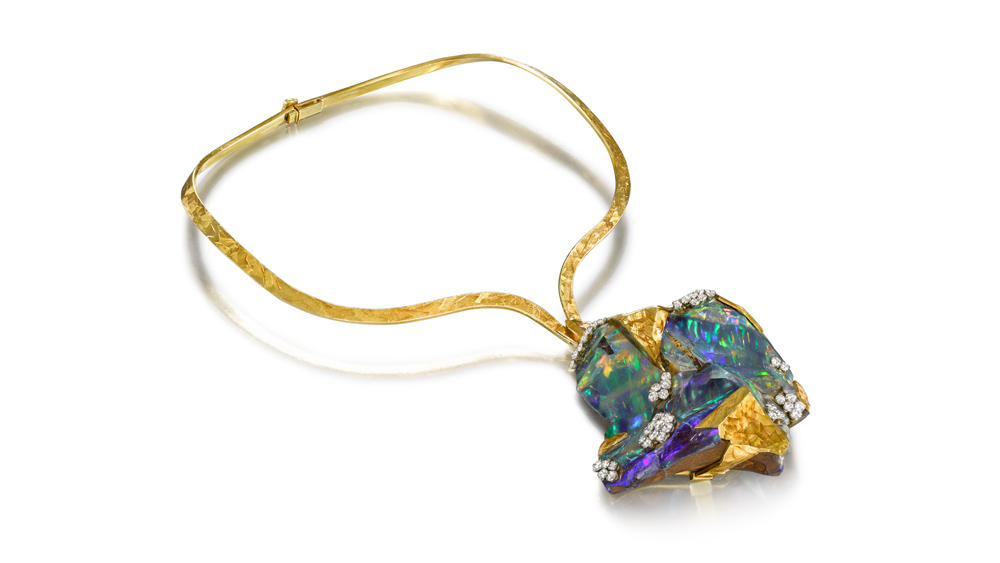 By 1966, Grima’s fan base had grown. In addition to celebrities like Jackie Kennedy Onassis and Ursula Andress, Grima’s London shop was visited by Prince Phillip, who purchased a ruby and yellow-gold brooch for Queen Elizabeth II—she wears it to public events to this day. Soon after, Grima was awarded a Royal Warrant, and he crafted numerous pieces of jewelry for the royals to gift to visiting dignitaries.

In 1969, Swiss watchmaker Omega approached Grima and commissioned an exclusive timepiece collection called About Time. The resulting designs remain some of Grima’s most iconic avant-garde work and consist of about 60 watches and 20 matching accessories. Several pieces from this collaboration will cross the block in this month’s Bonhams auction, including “Greenland,” a jagged-edged yellow-gold bangle topped with a rose-quartz watch face shaped like the rugged northern country ($26,00-$39,000), and “Cerini,” which is composed of a veritable nest of gold bits inspired by tiny wax-coated matches (cerini) used in bars throughout Italy ($19,000-$26,500). 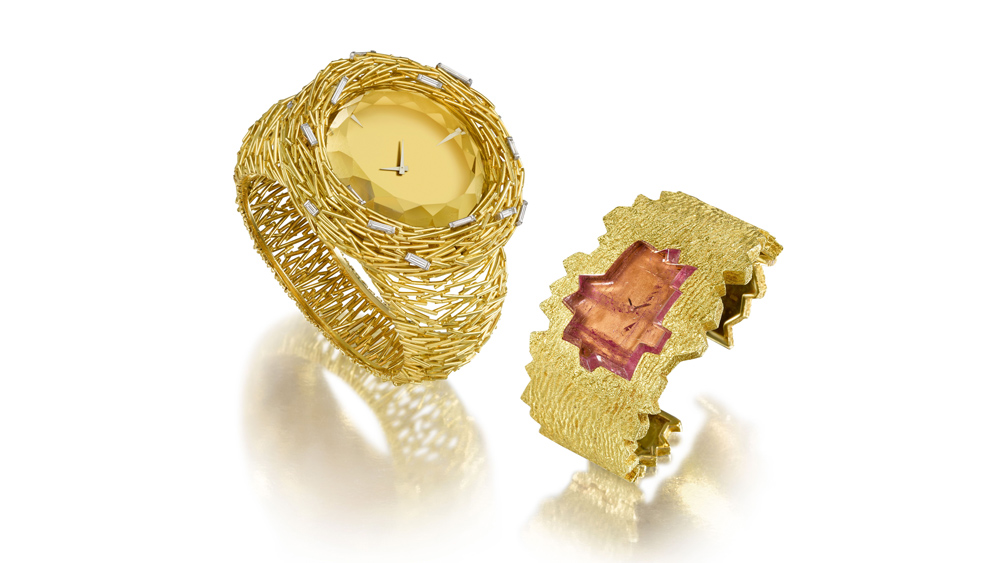 Abeles notes that the next generation of diehard Grima collectors will likely be transfixed by the jewelry for the same reasons royals and screen stars had been decades ago. “People that really collected his stuff don’t have just one piece,” says Abeles. The 55-piece collection coming to auction later this month is from the vault of one private collector. “If you liked his stuff, clicked with his idea, and understood his approach, you had to have more than one piece.”

Grima’s magnetic personality also played a role in his collectors’ devotion. “He had a persona that matched his jewelry”—energetic, charming, fascinating—“He was very invested in his designs, but also he had great relationships with his clients. So many of the people that have these large collections all knew him. I think that speaks to us about the type of person he was.” 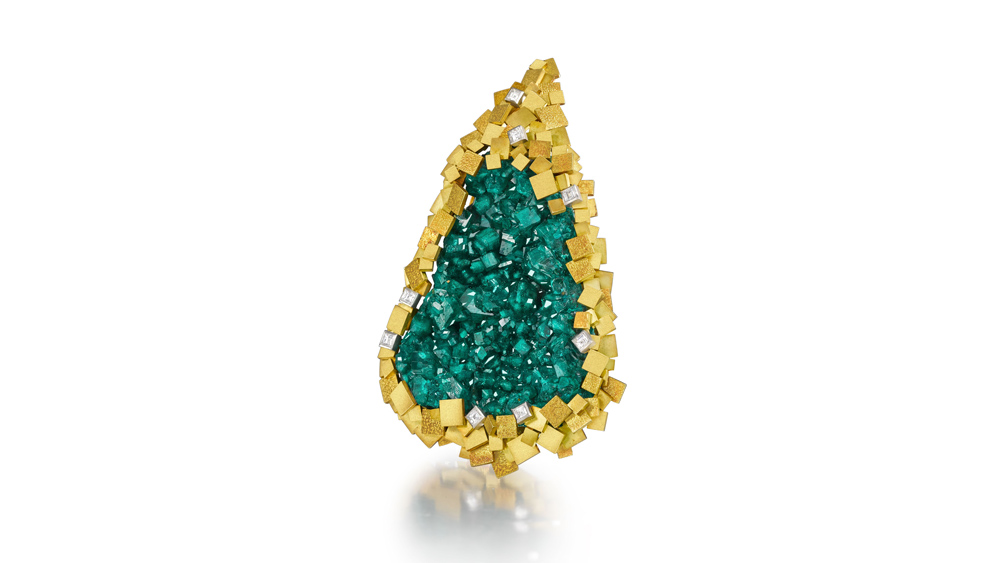 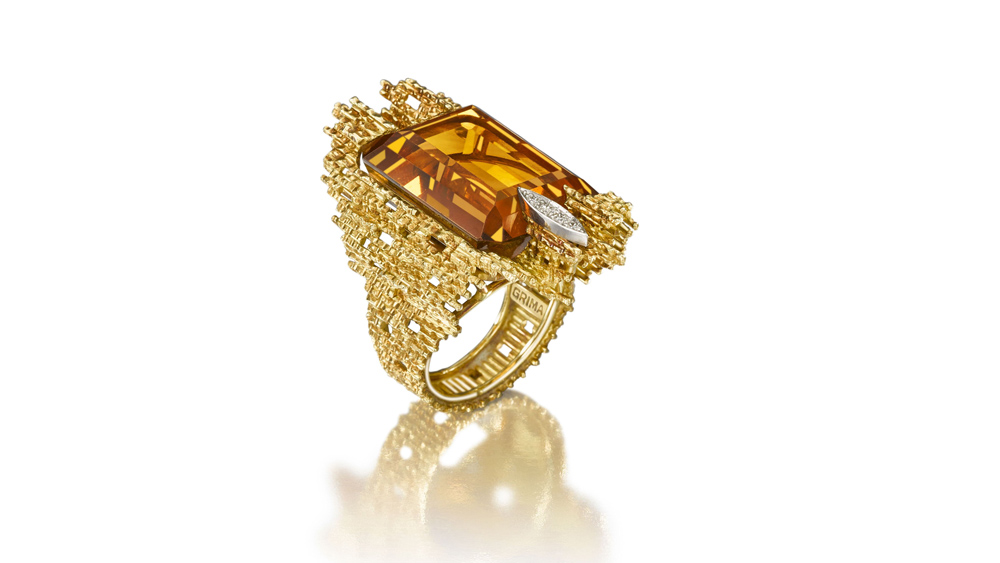