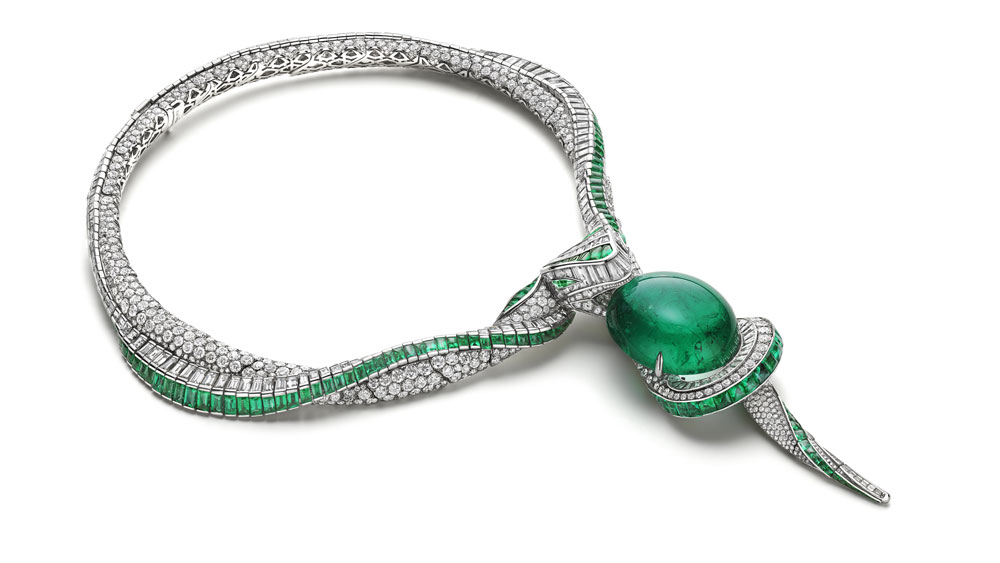 Bulgari put its star stone from its latest high jewelry collection under the spotlight in a new documentary film detailing the making of the extraordinary piece.

Inside the Dream, which premiered this week at the Toronto International Film Festival, is headlined by appearances by eight current “it” girls—actresses Zendaya, Priyanka Chopra Jonas, supermodel Lily Adridge, fashion icon Chiara Ferragni and singer Lalisa—but the real star of the show is a 93.83-carat emerald in the Serpenti Hypnotic Emerald necklace. The film begins in Jaipur, where it follows Bulgari’s long-time creative director Lucia Silvestri as she visits gem dealers who greet her like an old family friend. It quickly cuts to a scene where Silvestri rejects batch after batch of gemstones—none of which were deemed suitable for Bulgari. Picking up three small cases holding suites of gems, Silvestri examines them before decidedly telling the dealer, “No, no, no.” She looks up politely but expectantly as if to say, “I only expect the best.” The dealer scrambles.

So, what did take to get a “yes” out of Bulgari’s demanding creative director? A 21,000-carat rough emerald that the dealer agrees to cut for Bulgari, even though the family business has been holding onto it for 25 years. “We can only cut this for something very special,” he explains. “Our family has been in this business 50 years and we’ve never seen anything close to this.” The resulting 93.83-carat rock, which before cutting weighed just under nine pounds (likened to “the size of a baby” in the film) yields not just the nearly 100-carat oval cabochon set into the Serpenti Hypnotic Emerald, but two or three other 100-carat gems and 15 or 20 satellite emeralds weighing between 10 to 30 carats each.

The film then follows the gem through production at Bulgari’s “jewelry laboratory” in Rome, where it is incorporated into a massive torchon-style necklace designed in a ribbon-style swirl set with diamonds and smaller emeralds. It culminates in a massive gem-set serpent head, whose mouth holds the heavyweight emerald. From there, the necklace finds its way to the neck of actress Zendaya, who wore it to last year’s Cannes International Film Festival. According to Bulgari CEO Jean-Christophe Babin the necklace, “stole the show from our main competitor, the sponsor of the festival [Cartier].” The necklace has since been sold for $3.5 million.

“We thought it would be extraordinary to provide the public with a backstage look at high jewelry,” says Babin. “We felt that the luxury industry, particularly when it comes to jewelry, is obsessed by the red carpet, by the event where something is introduced to clients and the media as a finished masterpiece, but they hardly have any idea of what it takes before you get there.” It takes 1,000 hours just to cut the gem and then another 2,200 hours of manpower for its final setting.

For those looking for a better understanding of why high jewelry is so astronomically valued, Inside the Dream, produced by Terminal9 Studios and directed by Matthieu Menu, can be seen on Prime Video. Bulgari is now an official sponsor of the Toronto International Film Festival, which hopefully means there will be more extraordinary jewelry tales in the future.