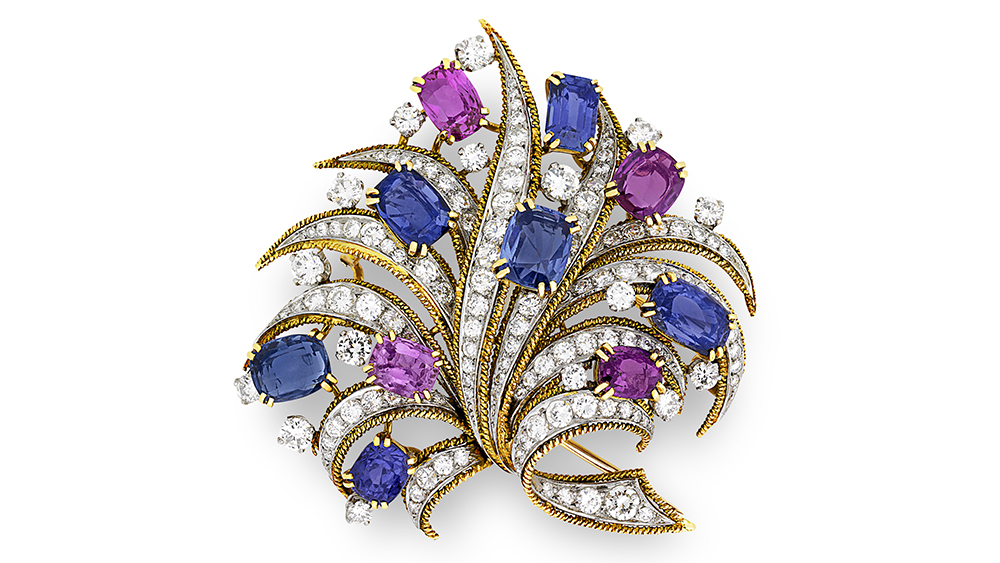 In 2011 Christie’s dubbed Elizabeth Taylor’s vast jewelry collection the “Crown Jewels of Hollywood.” While most of those precious pieces remain locked away by collectors, one of her prized brooches is now up for grabs.

The 18-karat yellow gold and platinum piece was designed by Italian jeweler Bulgari and decorated with cushion-cut blue and pink sapphires. It’s also laced with circular-cut white diamonds that balance out the manufacturer’s unique floral bouquet design. Its shimmering sapphires total 17.5 carats, while the diamonds reportedly weight 5.25 carats. Reflecting color and drama, the brooch seamlessly mirrors the sophisticated design codes of Bulgari; a brand that Taylor avidly collected pieces from over the years.

New Orleans-based antiques dealer M.S. Rau acquired the multi-colored brooch recently from a private collector who attended the Christie’s “Crown Jewels” sale on December 14, 2011 in New York City. That day, both sessions raked in a whopping $21.3 million total for its assortment of historic jewels and one-of-a-kind creations.

Taylor even wrote a book devoted to her collecting.  Amazon

A few of the dazzling lots included Van Cleef & Arpels necklaces, David Webb bracelets, a Jean Schlumberger gold case and diamond-studded Chopard offerings. The brooch was estimated to sell for between $8,000 and $10,000, it instead sold for nearly seven times those projections at $68,500.

“I’ve never thought of my jewelry as trophies,” shared the British-American actress in her 2002 book, Elizabeth Taylor: My Love Affair with Jewelry. “I’m here to take care of it and to love it, for we are only temporary custodians of beauty.”

Unlike many of her peers, Taylor was known to own her jewels rather than just borrowing them for special events. Many of her prized pieces, in fact, we bought by her husbands. Taylor’s most famous piece of jewelry stands to be a 69.42-carat pear-shaped diamond that famously became known as the Taylor-Burton diamond when actor Richard Burton purchased it for her. She wore the piece to the Oscars in 1970.