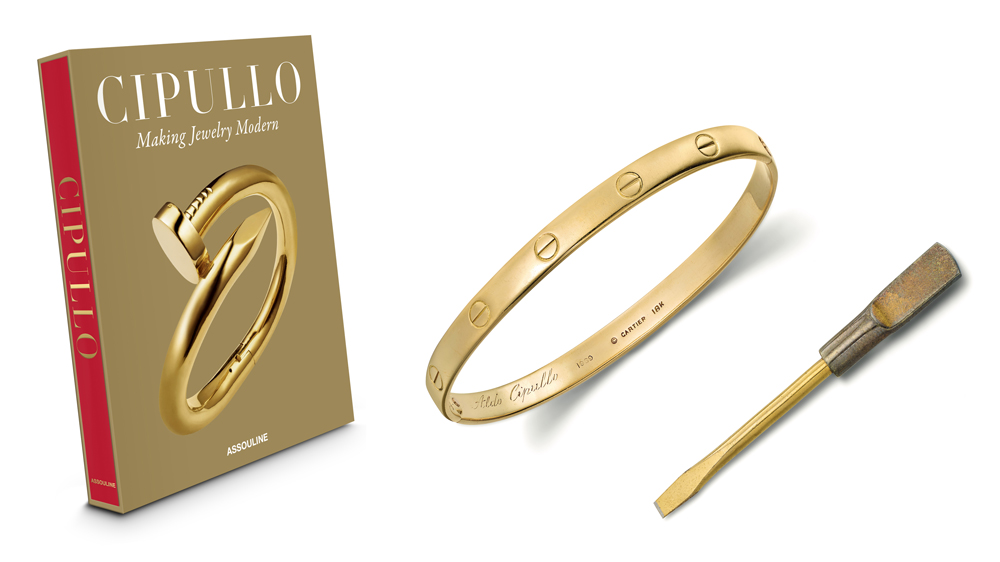 It was an Italian, by way of New York City, who made the Parisian house accessible to the modern masses. Aldo Cipullo wasn’t Cartier’s first foray into accessible jewelry—as a brand that has endured two world wars and the Great Depression, it had already seen the need to pivot with the times. But he did leave the house one of its most enduring designs that, decades on, has become world famous—the 18-karat gold Love bracelet, with its two elliptical circles of precious metal held together by screws, can only be unlocked with a tiny screwdriver and requires two people to put on the wrist.

The fascinating book, written by jewelry historian and expert, Vivienne Becker, recounts how Cipullo conceived of the design during a dark night of the soul when he lay awake at 3 A.M. mourning the end of a love affair. He wanted to keep the memories of his lost love locked up in a memento that he could keep enshrined on his body. But it was also an idea that harkened back to the days of 19th century Victorian mourning jewels, in which locks of hair and engraved messages for loved ones were encapsulated in lockets and trinkets (a few of Queen Victoria’s own are coming up for sale at a Sotheby’s auction this March), as well as Medieval chastity belts which protected women’s virtue and which only their husbands could unlock.

The latter doesn’t seem terribly romantic by modern standards, but it surprisingly gave inspiration to one of the most forward-thinking symbols of love in the 20th century. It served not only as an avant-garde alternative to a traditional engagement ring, but also as a piece of Cartier jewelry that could be worn every day. And at just $250 in 1969, when it was released, it was a vastly more affordable entrée into the elite maison’s vault. Today, thanks to inflation and a seemingly endless demand, a Love Bracelet can run you anywhere from $6,550 for the standard 18-karat gold version, all the way up to $42,100 for one accented in pavé diamonds.

But what you might be surprised to learn is that Cipullo originally offered the design to Tiffany & Co., where he was employed as a designer from 1961 to 1969, but was turned down. It turned out to be a two-fold loss for the American jewelry house as Cipullo jumped ship and sold the design to Cartier New York, which was operated separately from Cartier Paris and Cartier London and run by Michael Thomas under the Kenton Corporation. Soon everyone from Elizabeth Taylor to the Duchess of Windsor had a bracelet in their collection. (Taylor wore one on her wrist in the film X, Y and Zee.) Eventually, all Cartier branches would adopt the design.

The Love Bracelet’s bolts and screws eventually gave birth to another icon—the nail bracelet. Born in 1971, the nail design was featured wrapping around the wrist in gold or piercing through a lapel as a brooch. It can still be found in the glass cases of Cartier flagships today. Back then, the 18-karat gold bangle retailed from $250 to $750. Now it will set you back anywhere from $1,750 to $11,800 for the diamond version. According to Renato Cipullo, Aldo’s brother who commissioned the book through Assouline, another inspiration for both of these designs was their frequent visits to the Hippodrome hardware store on 45th street in New York City. “He loved to look around and touch everything and pick up bolts, nails, screws and pliers,” said Renato in a private press conference presented by Cartier. “He loved all of the mechanical things. He always wanted to do more and more with these things.” Aldo Cipullo found the practical objects housed within ripe for transformation from tool box necessities to high-end, but every day, accessories.

But he was much more than a two-hit wonder. In between the 211 pages, you will find everything from ornate but quirky pieces inspired by African tribal masks to high jewelry pieces like a baroque collar of diamonds and yellow sapphires set in platinum and 18-karat gold. The Neopolitan renaissance man, who once studied architecture and made appearances onscreen as an actor in Italian films, borrowed from his native culture and then took it to New York City where he was turned on to the casual American style of jeans and t-shirts and the fast-paced new world of disco, Warhol, Halston, et al. It was this melding of cultures and influences that would turn Cipullo into one of the most influential jewelry designers of his generation.

Although he died young, at the age of 42 in 1984, his legacy lives on, and Cipullo: Making Jewelry Modern gives his name the spotlight it deserves. It’s a must-read for any jewelry enthusiast and a surprisingly engrossing read for a coffee-table accessory. And here’s a tip for burgeoning collectors: Knowing the names behind the big houses is becoming more important to jewelry fanatics, rendering their designs increasingly more covetable, so if there was ever a time to read up on the figures behind-the-scenes, it’s now.