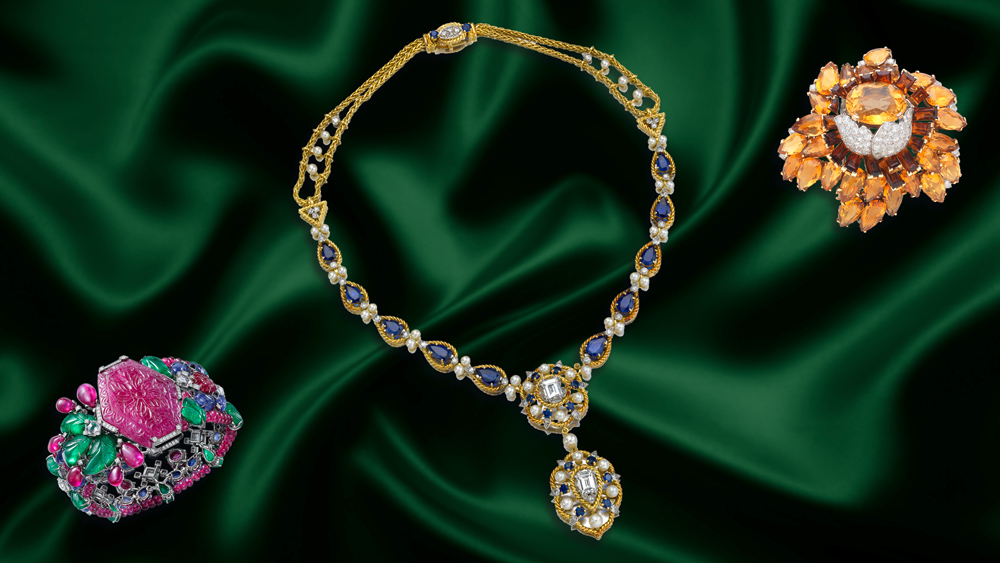 Anyone with a passion for historical jewelry knows of Cartier’s Tutti Frutti design. First created in the 1920s, Cartier’s groundbreaking Tutti Frutti piece made its global debut in 1936, when the glamourous socialite Daisy Fellowes donned the multicolored gemstone necklace and made it famous.

Today, the emerald, sapphire, and ruby designs—aptly named Tutti Frutti, reflecting the cornucopia of colorful gems—can fetch millions at auction and are among the most sought-after vintage pieces. A prime example is Evelyn Lauder’s Tutti Frutti bracelet that sold for $2.1 million at a Sotheby’s auction in 2014, far surpassing price expectations and breaking a world record for the design at auction.

While the pursuit of a Tutti Frutti for your jewelry collection may prove challenging, many more collectable Cartier pieces make their way to estate sales, galleries, and auctions every year. On September 19, Bonhams New York will auction 19 iconic Cartier designs from Gigi Guggenheim Danziger’s collection. Susan Abeles, director of U.S. jewelry at Bonhams auction house, shares crucial info to bear in mind when looking for a standout Cartier piece and calls out some of the most collectable designs in next month’s auction.

Look for the Signs

When it comes to collecting Cartier, seek out the brand’s official signature and you’ll be golden. “Collect both signature pieces and stand-alone pieces that show the brand’s creativity,” advises Abeles. One example of a signed piece is the 18-karat gold bracelet in Gigi Guggenheim Danziger’s collection, which heads to auction next month.

“This design was attributed to Dinh Van, who worked for Cartier for a short time. It’s a really interesting, architectural piece of jewelry. It’s a simple, easy-to-wear gold piece that has a Cartier signature,” says Abeles. “Its value will remain the same or appreciate because of that signature. There’s not a limit of how much it’s going to be worth. It’s not determined by the gold; it’s determined by the design and the manufacturer.”

Cartier’s designs have maintained their stellar status for many decades. Abeles breaks down what to look for when assessing pieces from each era and spotlights some essential items coming up for auction September 19.

Ornate, floral ribbon and tassel details are among the most defining elements of this time. “From the belle époque period, you might want to have a fantastic corsage or choker,” notes Abeles. This refined pearl and diamond women’s watch (shown below) is also a hallmark of the belle époque’s aesthetic. While not part of Danziger’s private collection, it will also be for sale on September 19.

Some of Cartier’s most famous designs—including the iconic panthère—date back to the 1920s. “If a person wants to focus on a period to collect, I would suggest the Art Deco period,” says Abeles. “Cartier designs during the Art Deco period were probably the most important.” This diamond-covered pendant (shown below) illustrates the intricate geometric motifs that flourished during that time.

Fresh colors and motifs emerge here, including chain links. “In the 1940s, you get into some great gold and citrine pieces,” says Abeles.

“In the ’60s, we see a change in jewelry altogether. TThe classical jewelry of this time period was simple, elegant, and typically had splashes of color with diamonds. Some brooches from the Danziger collection illustrate this style,” says Abeles, referring in part to Lot 122, a dazzling ruby and diamond piece shown below.

“Later, yellow gold began to dominate as the choice of metal in jewelry, and this can be seen with Lots 101, 109—each a diamond necklace by Cartier,” notes Abeles. “Lot 96, a brooch, also composed of gold, illustrates how jewelry was beginning to incorporate wood into designs.”